October starts on Saturday and with October comes Halloween. In anticipation of the season New Old Lompoc will release this year’s version of Monster Mash on Friday. Last night I had the opportunity to preview it and sample six other beers.


Those familiar with Monster Mash know that it’s a seasonal brew generally only available for a few weeks each year. Described as, “an Imperial Porter featuring strong chocolate and roast flavors with a touch of fruit,” this beer weighs in at a healthy 8.1% ABV. The oak notes are present in both the aroma and flavor and without the heavy sweetness often found in imperial brews, it’s a drinkable imperial. We were also treated to an aged Monster Mash, brewed in 2009 and bottled in 2010. I always enjoy side by side comparisons and found this one to offer greater berry/fruit aroma than the “fresh” version. 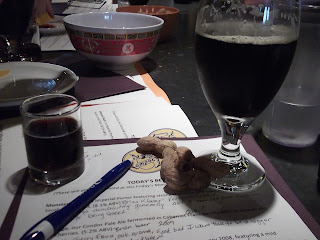 
As much as I enjoyed the two versions of Monster Mash, it was a couple of the other beers that stood out for me the most. The first was actually the first beer I had upon arriving, Steaming California. Anchor Steam produces the most recognizable steam beer but it’s not something I’ve ever been a fan of. NOL’s version, however, is clean and easy drinking. Maybe it’s the combination of Cascade and Cluster hops that I enjoy so much that overshadow the use of an American Pilsner yeast strain, something I would typically dislike. 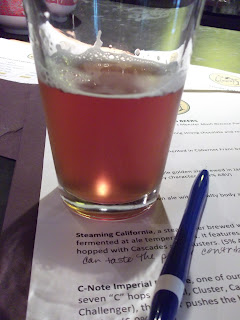 The second beer was again something I didn’t anticipate being a fan of. 2008 Mon Cheri, “a Belgian-style golden ale brewed in January 2008, featuring a mild fruitiness and a complex spicy character,” is probably one of the very few Belgian-style golden ales I’ve ever enjoyed. My first impression, the aroma, struck me as significantly more boozy than 6.4% ABV but it proved to be easy drinking and I’d agree with brewer Bryan Kielty that it has aged well.
Both Flamingo, Condor Pale Ale barrel fermented with sour cherries, and Bierz Brown, a dark brown ale with a malty body and strong chocolate and roast flavors, weren’t quite there for me. I wanted Flamingo to be bigger, heavier and more full-bodied, but it is what it is, a pale ale of 5.2% ABV. Bierz Brown, the first brew by Irena Bierzynski, was poured off the brite tank and I found to be a bit thin in body. Those minor criticisms aside, neither was bad, and I suspect they will be enjoyed by many, just as I enjoyed the C-Note Imperial Pale Ale. Can’t go wrong with the seven “Cs” of the hop world and 100 IBUs!
Thanks go out to the Lompoc Crew and Chris Crabb for an enjoyable tasting!
Posted by Kris at 1:17 PM