Recently I had the "opportunity" to spend a couple days in Eugene for work. It was mostly work, but I had a few hours Sunday evening to hit two places recommended by The Hopfather. He suggested The Bier Stein for their beer selection and Falling Sky Brewing for a meal accompanied by session beers. 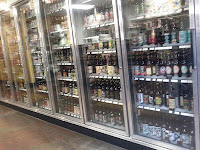 The Bier Stein quickly reminded me of one of my Portland favorites, The Beermongers. Offering 12 taps (including one nitro), wine and bottles to drink on site or take to go, they also have a small kitchen serving up what one would consider "standard bar fare." Having planned this stop for liquids only I didn't partake in their food offerings but they seemed to be turning out eats for many other patrons. 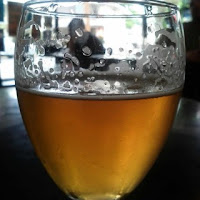 With at least four beers on the menu I was interested in I took advantage of the opportunity to order half pints, or in the case of two that were served in 12-oz glasses, a tasting of the six ounce variety. In addition to enjoying the beers from Flat Tail, Burnside Brewing, Gilgamesh and 10 Barrel, I had a nice chat with Dave about our mutual love of sour beers. 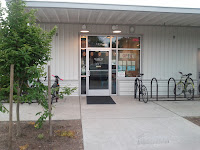 After my four half beers I pushed away from the bar to search out Falling Sky. Located in an alley, albeit a clean alley, Falling Sky is not much to look at from the outside. In fact, if you weren't looking for it you could easily pass it by. Luckily for me it was still light out and being a Sunday evening, there wasn't much traffic for me to hold up as I slowly crawled through the unfamiliar streets. 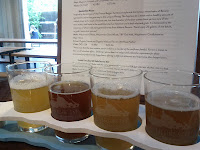 Upon entering the space was larger that the exterior would suggest, with a side patio and windows through which the brewery is visible. Following a strategy similar to the one employed at The Bier Stein I opted for a four-beer sampler tray and seeing that it was time for dinner, a plate of poutine. Not surprisingly, the IPA was my favorite and although ESBs, Bitters and ISAs aren't styles I seek out none of them were bad, offensive or poorly made. They just weren't for me.


Before long I knew I was due to head back to my hotel room and try to get some sleep before an early start to a long Monday was upon me. And although there wasn't additional time on this trip to sneak in a full repeat visit I did make a brief stop back at The Bier Stein for a few bottles to go, bottles that weren't old but were long gone from Portland shelves. Win!
Posted by Kris at 8:15 PM