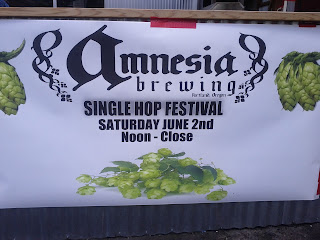 The second year of Amnesia's Single Hop Fest was very similar to the first - a light crowd at the start, a packed house by the time we'd made it through the offerings and headed out, great laminated descriptions of each beer atop the jockey boxes and the same beer took top honors in my book. The differences were minor and were improvements on what was already a good first fest. There were printed programs with details about each beer and instead of the 4-oz or so sample from last year for one ticket, this year saw only a slight increase in ticket price but each ticket got you (at least) a half pint. 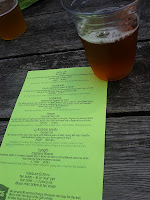 In case you didn't read the post from last year or you've forgotten (how dare you!), my favorite beer last year and again this year was Double Mountain's Cluster F*#k. I recall looking for it after last year's fest and having a hard time tracking any more down but I don't think it will be that difficult this year. I noticed Apex had it on tap within the last week and I'm hopeful that it'll be turning up at more bars. I would love to see this, or any Double Mountain beers for that matter, in bottles but I guess I'll just have to be patient on that front, settling for now to enjoy their great beers when I find them on tap. 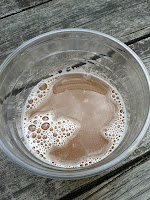 Beyond Cluster F*#k, a couple other beers I really enjoyed were Terminal Gravity's Double IPA, with Simcoe hops, and Amnesia's Ripplin Tripel. Terminal Gravity was the only brewery to submit two beers of the same style but made with different hops. I fully expected to like both of them and was surprised to find I didn't enjoy their Double IPA made with Columbus hops. Hopefully I'll be able to retrieve that little nugget of hop preference from the depths of my mind for use in the future. Besides being tasty, I was completely surprised to find I enjoyed the Ripplin Tripel. The aroma was very Belgiany however I was pleased to detect zero Belgian characteristics in the flavor. Chalk up another beer I'm glad I didn't miss the opportunity to sample.

Besides an interesting line up of beers and an opportunity for me to continue my beer education it was a great afternoon of drinking with friends. If you went I'd love to hear what your favorite beers were. 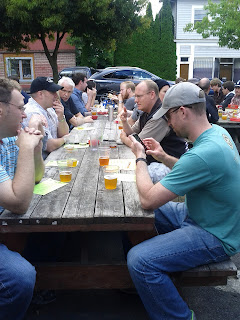