Our recent four-day trip to Seattle was long overdue. Not only hadn't we been there since moving to Portland over two years ago but we hadn't been there since our honeymoon, almost 10 years ago. It's not that we hadn't talked about going, we'd done plenty of that, but it was a matter of finally making plans and going. When a happy collision of scoring a free two-night stay at Hotel Monaco and realizing that the Vikings were playing at Seattle in early November occurred we decided to jump on it.

It wasn't designed to be a beer trip 100%, there was the football game to attend and the King Tut exhibit at the Pacific Science Center to see, but it wouldn't be a vacation for us without including beer, especially in a beer city like Seattle. It was the least planned trip we'd taken meaning there were some places we missed visiting because we hadn't taken into account their open hours but there was one very, very happy surprise we probably would have missed had we been on a completely planned out trip. 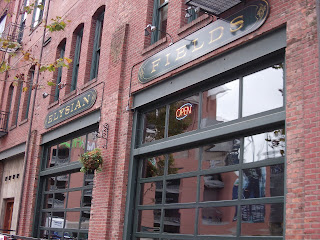 We kicked things off right away, walking just a couple blocks from the Amtrak train station over to Elysian. As is usually the case with beer brands we're familiar with there were their standard beers available as well as those limited, found-only-at-the-pub-or-nearby beers. All five we tried were excellent - Krokus, Omen, Humdinger, Maelstrom and Dark 'O The Moon. 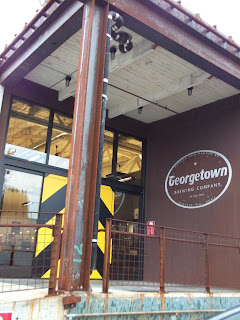 After dropping our belongings off it was off to Georgetown Brewing. We made it within the last half an hour they were open and the place was hopping with people picking up growlers. We weren't interested in growlers but trying everything they had on tap which numbered nine. Lucille, the hoppiest of the bunch was the grapefruit hoppy that makes me most happy and DH369, made with last year's experimental hops now called Mosaic, was both fruity and stanky and very, very good. The biggest surprise of our time there came at the end when we tried to pay for the samples. Apparently samples, even all 10 of them, were free. 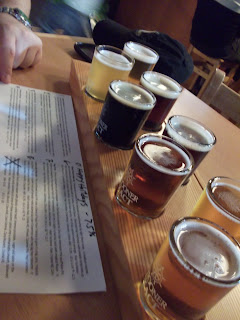 Venturing back out into the rain we made our way over to Schooner Exact, guided in at the end by the sandwich boards on the street reading, "BEER ----->." (As an aside, whenever you see these signs, follow them!) Bellying up to one of the shared tables we set about to another sampler tray. Again the hoppy one, Hop Vine, most tickled my fancy while Mag favored King Street Brown Ale, which I have to admit is probably the best brown ale I've had, due in large part to the hazelnut aspects.


That brings us to the end of our first of two beer focused outings in Seattle. Check back tomorrow to see what else we drank.
Posted by Kris at 6:57 PM