I just ran across this article on cnn.com. It doesn't bode well for me. Luckily I'm still in my 30s. I've got a few years to lose the belly...yeah, right.
NEW YORK (AP) -- Having a big belly in your 40s can boost your risk of getting Alzheimer's disease or other dementia decades later, a new study suggests. 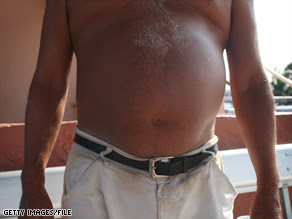 It's not clear why abdominal fat would promote dementia, but it may pump out substances that harm the brain.

It's not just about your weight. While previous research has found evidence that obesity in middle age raises the chances of developing dementia later, the new work found a separate risk from storing a lot of fat in the abdomen. Even people who weren't overweight were susceptible.
That abdominal fat, sometimes described as making people apple-shaped rather than pear-shaped, has already been linked to higher risk of developing diabetes, stroke and heart disease.
"Now we can add dementia to that," said study author Rachel Whitmer of the Kaiser Permanente Division of Research in Oakland, California.
She and others report the findings in Wednesday's online issue of the journal Neurology.
The study involved 6,583 men and women who were ages 40 to 45 when they had checkups between 1964 and 1973. As part of the exam, their belly size was measured by using a caliper to find the distance between their backs and the surface of their upper abdomens. For the study, a distance of about 10 inches or more was considered high.
The researchers checked medical records to see who had developed Alzheimer's or another form of dementia by an average of 36 years later. At that point the participants were ages 73 to 87. There were 1,049 cases.
Analysis found that compared with people in the study with normal body weight and a low belly measurement:
• Participants with normal body weight and high belly measurements were 89 percent more likely to have dementia.
• Overweight people were 82 percent more likely if they had a low belly measurement, but more than twice as likely if they had a high belly measurement.
• Obese people were 81 percent more likely if they had a low belly measurement, but more than three times as likely if they had a high measurement.
Whitmer said there's no precise way to translate belly measurements into waist circumference. But most people have a sense of whether they have a big belly, she said. And if they do, the new study suggests they should get rid of it, she said.
It's not clear why abdominal fat would promote dementia, but it may pump out substances that harm the brain, she said.
Dr. Jose Luchsinger of the Columbia University Medical Center in New York, who studies the connection between obesity and Alzheimer's disease but didn't participate in the new work, cautioned that such a study cannot prove abdominal fat promotes dementia.
But the study results are "highly plausible" and "I'm not surprised at all," he said. High insulin levels might help explain them, he said.
Dr. Samuel Gandy, who chairs the medical and scientific advisory council of the Alzheimer's Association, said the results fit in with previous work that indicates a person's characteristics in middle age can affect the risk of dementia in later life.
And it's another example of how traits associated with the risk of developing heart disease are also linked to later dementia, he said.
Posted by Mag at 4:02 PM