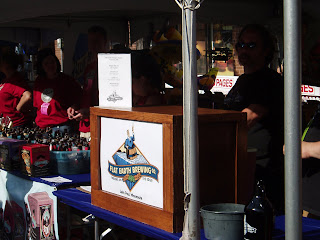 Well, Mother Nature did it to us again this year. About an hour into the City Pages Beer Fest it started raining big, fat, cold drops of rain...and then the marble sized hail came...lots of it. I happened to be outside the tasting area at the time so I was able to find shelter and Kris had her poncho with, so she stayed dry, but she ended up with welts on her arms from the hail. Luckily the rain and hail didn't last long, so the festing could continue. At least until the second band of storms came through. And for anyone wondering, there weren't really any wet, see-through t-shirts present. hrmmm 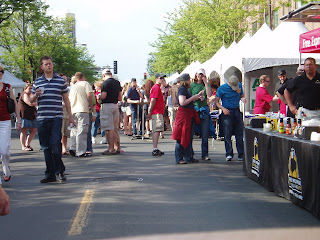 Kris was pleased with the event, overall. I was less so. The beer selection was as we expected; lots of crap which was made up for by great beers from some of the craft beer joints. One annoying thing about the fest is that most of the beer is served by volunteers who 1) don't know squat about beer (most of them), 2) were often pretty rude (some of them), 3) weren't even filling the tasting cups to the damn 2 oz. line (about half of them). And the crowd was mainly rude drunks who also didn't know crap about beer. I happened to be standing at the Flat Earth tent towards the end of the evening when some d-bag came pushing through the crowd, stuffed his arm over my shoulder, and shouted for Jeff to "Give (him) some of that dark shit. That dark shit is good." Of course, he was referring to Black Helicopter. *sigh* Too much of that. By the way, Flat Earth's dark shit is good if you haven't had it. Real good. Jeff used coffee from Paradise Roasters, a premier, local roaster in the beer.
Highlights: