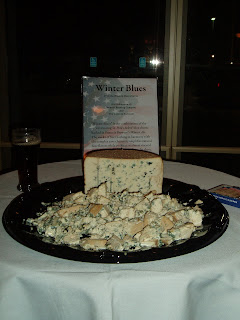 Picture a roofless bar with 4-foot high walls that sits on top of a hill and is flooded up to the level of the walls. My friends and I are sitting around in a flooded bar, up to our armpits in comfortable water, in the middle of winter, drinking beer and watching Cleo and other dogs swim around. Another unknown friend comes tromping up the hill to join us, leading his/her (faceless being) great dane, which was wearing roller skates on all four paws. As the dog gets closer, I see it has shaved feet; ugly, pink human feet.

Creepy. That was a dream I had last night. I'll often have really weird dreams if I eat after say 8 or 9 at night. I actually kind of enjoy it. But last night was the first time I've had Vietnamese food that late. I think the Pho from Ngon, as well as the beer and blue cheese I had earlier in the evening, conspired to cook up one of the most bizarre dreams I've had.

Kris and I had a chance to go to a private tasting of a Summit/Amablu cheese collaboration last night thanks to MNBeer's Ryan. Summit's Winter Ale was used in the making of Winter Blues, a St. Pete's Select blue cheese bathed in said beer. Kris has had a few of the Amablu offerings before, but this was my first time. We were both delighted with the cheeses served as well as with the Summit beer (of course). I'm generally not partial towards "fancy" cheeses, but I'll take small nibbles in the hopes that I'll one day acquire the taste. Luckily for me, Amablu uses cow milk to make their cheeses, which means they are not too funky for me to enjoy.

We got to the event right at 6, so we were able to chat with Mark Stutrud for about 15 minutes. I've had a chance to meet and speak with Mark on several occasions and I've found he's a personable, friendly, unassuming dude. Good guy. And it turns out that I actually have several connections with the Amablu folks. I used to work with one of the owners during my time working in Faribault. We were surprised to see one another at the event, but were glad for the chance to catch up. It also turns out that I and the President & Big-Cheese for Amablu, Jeff, used to work for the same company. Our paths never crossed as he had left the company prior to my joining the company. Needless to say, the conversation last night was as good or better than the beer and cheese.

Kris and I caught up with Kat and Scott at Ngon after the event at around 9 P.M. We had a few more beers and a late dinner of eggrolls and Pho and ended up leaving the restaurant, cheerfully content, as they were closing up.