Yesterday was an exciting day as Kris and I hit our first beer fest, Oregon Brewers Festival ("OBF"), since moving to Portland. The fest has a good reputation and given that this IS Portland after all, our expectations were very high. Of course, being who we are, we couldn't simply enjoy the fest for what it was. Noooooo. We had to go and immediately compare every detail to some of our favorite fests like Great Taste of the Midwest and Autumn Brew Review. I assumed OBF would stack up well or even surpass these other fests. I was wrong. Here's why:

Sense of Excitement
OBF is a four day event and you don't need to buy tickets ahead of time.  That means, if you want to go to the fest, you can get in.  But wait!  Why's that a bad thing, you ask?  It's not, I guess.  But instead of having a fest filled with die-hard beer fans who are very excited to be there, you get a mixed crowd of families, casual drinkers, fanatics, etc.  Again, that's not a bad thing, but it detracts from the overall mood of the crowd (e.g. enthusiasm).  There was no countdown nor ragged cheer when the gates open.  Some people don't like how some fests can turn out to be exclusive events, but if you're fortunate to get a ticket, I think this makes the fest all the sweeter.  Yeah, there's a flip side to this that sucks.  But there's no denying a sense of excitement when you hold the hard-to-get-ticket.  But, this is made up, in part, with enthusiastic, random yelling (see below).

Beer Shirts
What?  Yeah, I said it.  Beer shirts.  Kris and I saw very few folks wearing beer shirts, hats, etc.  I mean, what's a beer fest without folks supporting their home team or favorite pub or whatever.  Based on the crowd, this could have been any kind of outdoor event.  I like seeing the beer geek crowd all decked out.  Hell, it's like going to Comic-Con and not seeing Storm Troopers or Spidey running around.  A certain important element is missing from the ambiance.  Also, and this is weird, as I was wearing a Surly work shirt (a very common thing to wear at GTotM or ABR), I got asked about five times about Surly beer, as though I was the brewer.  "What did you bring to the fest?"  "How long have you guys been around."  What the hell?!  I didn't ask the short white dude wearing a Pryzbilla jersey if he liked playing for the Blazers.  Goofy as hell, man.

No Food
No food could be brought into the fest.  Now, normally this doesn't really bother me much, although I think it's a bad idea.  But this means that all the creative pretzel and sausage necklaces had to be left at home.  I mean, what's a beer fest without pretzel necklaces???  And I didn't get a chance to eat any too-warm meat and cheese.  Thankfully, we did see a few guys who snuck in pretzel necklaces.

Volunteer Servers
All the beer was served by volunteers.  Many of these volunteers were quasi-knowledgeable about beer, but given that any Joe off the street could sign up to be a volunteer, many of them were clueless.  It doesn't help that most of them were serving beer about which they probably knew nothing.  So, there were no opportunities to chat with anyone who knew anything about a particular beer, brewery, etc.  You could get a tasty beer, but you certainly couldn't learning anything else about the beer/brewery.  But I can live this.  What I find unconscionable is the servers leaving full and partially filled pitchers of beer sitting in the hot sun when there was shade available.  Christ, if you gave a damn at all about beer, you wouldn't do that.

No Beer Stands
Beer at OBF was stored in large semi trailers and pushed through coolers into pitchers from whence they were poured into ones cup.  Tables were lined up, end to end, with the crowd on one side and the serving volunteers on the other.  Now, this is an efficient way of doing things and pretty common.  But it really lacks character.  I like when breweries get to set up their own little stands or personalize their spaces.  It tells you something about them and adds to the overall experience for attendees. 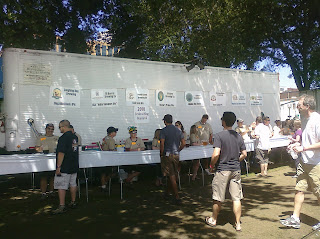 One Beer Per Brewery
Aside from special offerings in a buzz tent, each brewery/brewpub had one beer on tap at the fest.  There was no chance to explore several offerings from a place you'd never heard of or had the chance to visit, thus giving you a chance to evaluate the spectrum of their offerings and setting your overall level of interest in their beer.  Instead, you get a limited picture and run the risk of basing your opinion on a brewery/brewpub based solely on the merits of one beer.  Summit and Surly were both at this event.  Summit had their Horizon Red and Surly had Bitter Brewer.  Well, okay, Surly had Four in the buzz tent as well, but the damn yokels running the fest had the wrong beer hooked up for several hours, thus giving folks the wrong beer.  We learned this when someone told me, because I was wearing a Surly shirt, that my Russian Imperial Stout (at least he was in the right ballpark) was way too pale and underflavored.  *sigh*  But I digress.  If you were to base your opinion of Summit and Surly based on your sample of Horizon or Bitter, you'd really have missed the mark with respect to what these breweries are really doing with their beer.

Random Yelling
If you've been to a beer fest in MN, then you know that when you hear the roar of the crowd roll from one end of the grounds through the other or roll out in ripples from some central point, some pour sucker has dropped his/her beer glass and broken it.  You immediately get a warm glow from 1) not being that pour sucker and 2) being part of a superior majority of drinkers able to hold on their glasses.  OBF had a similar rolling-wave of yelling, but given that the tasting cups were plastic and the event was held on a grassy area, I'm not sure what caused the yelling.  Was it simply someone dropping a beer?  I made numerous inquiries but was disappointed by the blank-stare, shrugged-shoulder responses I got.  I was happy to hear the random roar of the crowd, but disappointed that I couldn't confirm why.  That didn't stop Kris and I from enthusiastically joining in the random yelling, though.

No Bagpipes
I know there are many haters of bagpipes.  But I, for one, like a little bagpipe at my beer fest.  'nough said.

In Retrospect
I look back at what I've just written and can't help but feel that I've been too negative.  At the end of the day, OBF was a reasonably well-run, affordable, accessible, comfortable beer fest.  It was a good time and I drank quite a few tasty beers.  But it lacked the overall level of excitement and beer-dork ambiance that I'm used to having at premier beer fests.  Given the abundance of beer fests in Portland, I'm hopeful that we'll find some that provide the atmosphere we're looking for.  But as long as we've got good beer to drink, I think we'll be okay.
Posted by Mag at 7:55 AM