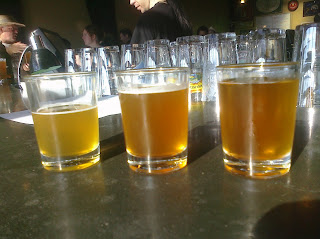 All three beers were very drinkable (although I’d really love to be able to have the Ginger with some sushi) and being in the 6-ish ABV range, easy to enjoy a few of. As far as I’m concerned, Buckman is off to a great start. Such a great start that I might have to return tonight as the carrot being dangled is that they’ll have a firkin. Hmmm…will it be the Chamomellow? Something new? It’s probably important for me to investigate so I can report back.
Posted by Mag at 3:41 PM