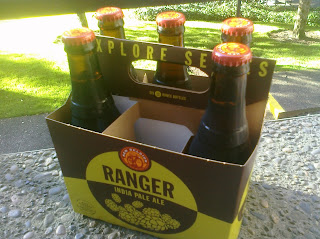 Weighing in with 70 IBUs it might be a bit more hoppy than I’ll find I want for a go to beer, but tonight it hit the middle of the road spot I was looking for hard enough to be a contender.  I know you'll be waiting with baited breath to see who ends up filling the highly coveted "Everyday Beer" slot.  Stay tuned...
Posted by Mag at 6:58 PM