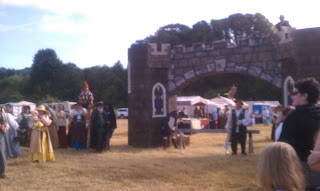 In case you don't recognize it, that's the front gate of the Shrewsbury Renaissance Faire. Living in Minnesota previously we were supremely spoiled by what is likely one of the best renaissance festivals in the country. That version runs for approximately six weeks at a site where there are permanent buildings, stages, etc. The Shrewsbury version is a two-day affair on what they hope is the driest weekend of the year. While it was good to scratch that itch and check it out, we were ready to leave after a couple hours and therefore had to formulate Plan B.

So our plans changed to this.﻿ 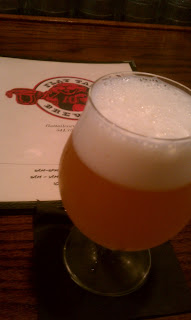 Being so close to Corvallis we couldn't pass up checking out Flat Tail Brewing. I've been very pleasantly surprised with the sour beers they've been making, most recently enjoying Cool Hand Cuke, a cucumber Berliner Weiss, at Bailey's. Fortune (or maybe Fate, as apparently it was Sour Beer Day) shown on me as during our visit Flat Tail had that one and another sour, Vallee Blanche, available. Like Cool Hand Cuke this was a great, light sour and the epitome of why Flat Tail has become a favorite of mine. I also really enjoyed their White Heat Wit, a wit made with pink and white peppercorns. For those who aren't into spicy beers, not to worry. The pepper profile is most certainly there but not in a hot, spicy way. Rather the peppercorns work with the wheat base to give it a very distinct yet drinkable flavor.

It would have been nice to saunter down to Block 15 for a few pints but it seemed to make sense to hit the road before Beavers fans streamed out of the stadium. Guess we'll just have to make another trip soon.
Posted by Kris at 11:12 AM