Is the Whole Greater Than the Sum of its Parts?

Roscoe's held another of their summits on Friday, this time a collaboration summit, showcasing collaboratively made beers. There were 14 to choose from and since I was flying solo I had to be brutal with my decision about who would get cut and who would make it on my sampler tray. I was able to narrow it down to five, what I hoped to be outstanding, beers. 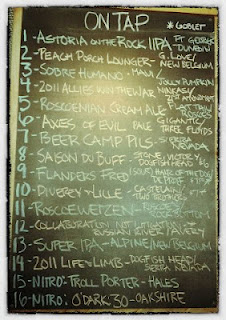 Rosconian Cream Ale - The first of two collaborations involving Roscoe's, this was brewed by Flat Tail. The flavor was delicate and pleasant as one would expect from a cream ale but it was the mouthfeel that really hooked me. Although probably deviating from style the wasabi, Kaffir lime and ginger worked well together and I would enjoy seeing this on from time to time at Roscoe's.
Roscoeweizen - The other Roscoe's collaboration paired them with Rock Bottom to produce a hoppy wheat beer. The wheat characteristics came out more as the beer warmed but they were subtle and offered a great backdrop for the Amarillo hops this beer was brewed with.
Sobrehumano - This was the choice I was least sure about, coming from Maui and Jolly Pumpkin, but I couldn't resist the fact that it was made with Michigan cherries. Those cherries were strongly evident in the delicious aroma although didn't carry through to create the beautiful, crisp, red appearance I had hoped for. Setting aside the visual aspect the cherries made a reappearance in the flavor leaving a very pleasant lingering flavor in the mouth. 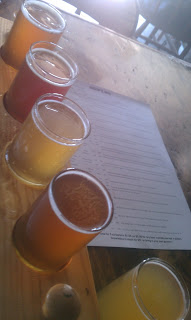 Astoria on the Rock - I had high hopes for this one, a collaboration between Fort George and Dunedin, which if you remember put in a showing at OBF. Being an imperial IPA, a style I readily enjoy, I was surprised to find that from the very first sip all the way through finishing the taster, that I really didn't enjoy it. Although I couldn't put my finger on what turned me off about it I suspect it may have been the hop variety/varieties that were used.
Flanders Fred - I purposely saved this one for last. In addition to being made in part by Hair of the Dog, it was one of the higher alcohol offerings. Starting with the aroma, lambic no doubt!, and continuing through to the flavor this beer was too good for words. It was so good that I strongly considered ordering another sampler or possibly even a goblet of it. If you can't get it on tap I believe it may be available in bottles. Surely it'll be on the more expensive side but trust me, it's worth it. 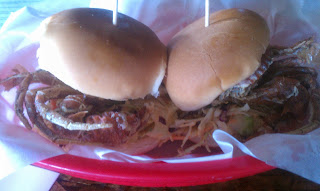 It wouldn't be a trip to Roscoe's without eating and I'd be remiss if I didn't mention the awesome food I had. Starting off I couldn't pass up the special - two soft shell crab sliders for $5.25. Then from the the sushi menu, the Ricky's special and finally for dessert, my favorite sushi house offering - salmon roe with quail eggs.


Seeing as how the summit was just two days ago I think there's a good chance there are still some, maybe even many, of the collaboration beers left. So if you didn't make it to Roscoe's yet now is the time to go. Because really, today is a second Saturday for most of us so go make the most of it!
(Beer menu photo courtesy of Jeremy Lewis.)
Posted by Kris at 9:11 AM

Email ThisBlogThis!Share to TwitterShare to FacebookShare to Pinterest
Labels: Hair of the Dog, Roscoe's