The people have spoken. The results are in. Oregon kicked some BIG beer butt outpacing their nearest competitor, Colorado, by a nearly 2-t0-1 ratio in Concordia's Beer Brawl VI. Each of the 590 taster trays contributed three votes (one in each category) to come up with the following totals.
Oregon 720
Colorado 425
California 365
Washington 260


And now, so that we're on the same page as I muse over some of the results, here are the beers in the order of the taster tray. 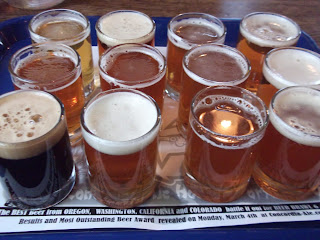 The first thing that struck me was learning that #1, a beer that knocked my socks off, is made with the same hops, Mosaic, that I learned through a bottle share on Saturday I really, really enjoy (if you follow me on Twitter you may have seen the tweet).

The next observation was that #4, which I felt was a strong runner up to #1 in the Pale Ale category, was Dale's. I know that this is a beer I've thoroughly enjoyed in the past but it's been quite some time since I last had one. I'm glad to see it still makes my taste buds sing.

My blindly chosen favorite in the IPA category, #6, turned out to be Good Life Descender IPA. I haven't had a lot of Good Life but with this information I'll have to see about having more in the future.

#9, the oddball of the bunch, is a beer I know I've never had before and although I didn't choose it as my favorite in the Open category it was good. Now that I know its identity I hope to find it again as I'd like to have more of it.

I was not surprised at all to learn that my favorite, #11, was Hop Venom. Interestingly, however, #11 did not take receive the most votes overall. That honor went to #6 Good Life Descender IPA while the second most popular beer overall went to #1 Pfriem Mosaic Pale Ale and third place to #9 New Belgium Chocolate Coffee Stout.
With that bit of fun done I'm looking forward to the next "drinking game" Concordia presents to the thirsty Portland masses.
Posted by Kris at 8:06 AM