At Lardo's first beer and cheese pairing it was promised that there would be more in the future. This past Thursday the promise became reality. Five Breakside beers were paired with three Oregon cheeses and one each from Washington and Montana, directed by Steve Jones, Portland's premiere cheese monger. 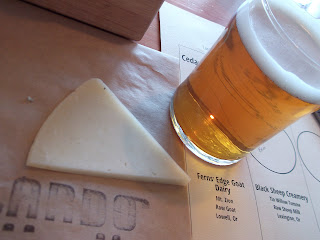 I generally enjoy Breakside's beers although I don't visit the brewery as often as I should so four of the beers were completely new to me. The tasting started out with the lowest ABV beer, Cedarbaumbier, an American Wheat Ale brewed with cedar tips and 40% wheat. Both the beer and the cheese, Ferns' Edge Goat Dairy (OR) Mt. Zion, were mild in flavor, complimenting one another nicely.

Up next was MacFischer's Peated Scottish Ale, a beer I would not typically order as Scottish beers tend to be too malty for me and I don't enjoy peat flavor much. However it was not surprising to discover that like other pairings Steve has had a hand in, the whole was far greater than the sum of its components. The peat flavor was subtle and the dryness of the Black Sheep Creamery (OR) Tin Willow Tomme countered the maltiness of the beer. 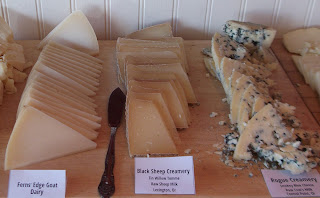 The third beer, Battle of the Bulge Belgian Stout, was paired with Samish Bay (WA) Ladysmith. Again the beer was of a style I wouldn't typically order but the pairing with this high moisture, salty cheese helped to offset the Belgian characteristics I dislike in the beer.

Aztec Ale was the only beer of the day that I had tried previously. This beer, brewed with habanero and serrano peppers as well as cacao, could be considered Breakside's signature beer. A delicious yet assertive beer, it was well matched with an equally assertive raw cow cheese, Mountina (MT) Mountina Original.

The final pairing of Barberhop Quartet Double IPA, an 8.9% ABV beer brewed with Citra, Cascade, Amarillo and Columbus hops, with Rogue Creamery (OR) Smokey Blue Cheese acted as dessert. The strength of the beer was apparent, although pleasantly so, and along with the creamy smokiness of the cheese made for a pairing that was delicious in a decadent manner. 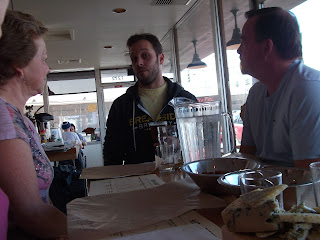 Each of the pairings were introduced to our end of the table by Ben Edmunds of Breakside in which he discussed the beers' backgrounds as well as details about the cheeses while Steve covered the opposite end. Ben's descriptions of the cheeses were impressive and had Steve been unable to attend Ben would have been able to handle things quite adequately.
Compliments and thanks Ben, Steve and the Lardo crew for putting this event together. Now is it too much to ask for v3.0 to come at us in yet another few weeks?
Posted by Kris at 6:55 AM