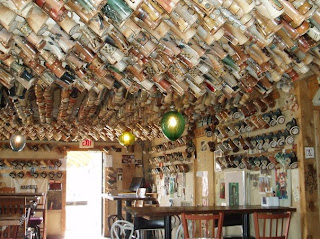 Day two was another day with a fair amount of driving, staring off with 1 ½ hours to Marshall, home of Dark Horse. Being pretty big fans of their beers, we were excited to see where they were produced and I’m happy to report we weren’t disappointed.

The whole shooting match – the interior, lined with hundreds of handmade mugs, the patio, complete with hop vines, picnic tables, a stage, sandbox and half of a mannequin that has been retrofitted to serve beer, and the beers and the staff – are amazing. We are blessed that we are able to get most Dark Horse products in MN, but there is something to be said for getting it straight from the brewery. Their Raspberry Ale has been my least favorite of their beers, but having it fresh from the brewery assured me that it is as good of a product as any of their other brews, just one that suffers more during transport. 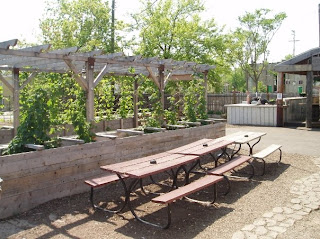 We could have easily spent the day there, but more places were on the agenda, including a last minute entry – Arcadia in Battle Creek. After the great experience at Dark Horse, the bar was set pretty high and they fell a bit short. Service: meh, beers: nothing bad but nothing outstanding either. Oh well, on to Bell’s.

Bell’s production facility in Galesburg isn’t open to the public so that left us to visit their Eccentric Café in Kalamazoo. They seem to have caught the rye bug, with three varieties on tap: Golden Rye, Rye Barleywine and the favorite beer for all of us, Rye Stout. After checking out their store it was time to hit the road again.

Our final planned stop was Walldorff in Hastings, a pretty standard brewpub set up that looked eerily like Emmett’s in IL from the outside. Both the food and the beer were mediocre, nothing to warrant a return visit if we found ourselves in Hastings but since it was on the way back to Grand Rapids, nothing really lost either.

Upon arriving back in Grand Rapids we found ourselves with a surprising amount of energy and drinking ability still left so we decided to skip ahead on the schedule a bit to pay a visit to Founders. Although we can get some Founders products here, there were many, many brews on the board that were new to us. Cerise Cherry Ale and Peppercorn Pale were two of those and my favorites. They are very different beers suited to very different moods but I’d take either any chance I get. Knowing we’d be back later during the trip we had seven or eight from their large selection and called it a night.
Posted by Mag at 6:20 AM