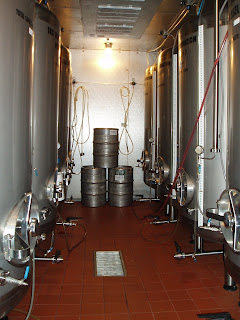 I’ve been on more brewery tours than I can count. Never before have I been asked if I had any alcohol in my system (unless it was followed up by, “well, why not?!?"). So when I was asked that today at Granite City I had to ask them to repeat the question, answered honestly that yes, I had a beer with a big burger for lunch a couple hours ago and then waited as the guy looked as if he was trying to decide if I should be allowed to walk the 10 feet through their kitchen to get to their brewing space.

Test passed, I followed Mike through the kitchen, into the locked brewing space. There isn’t much to say about the facility as it’s just a two room set up. One room holding the four, 500 gallon fermenters and a second, refrigerated room holding the eight determination tanks.

The most interesting things I gleaned from the tour:
* The Ellsworth, IA site was chosen for its well water and is within 500 miles of all 27 restaurants that operate in a nine state region.
* The transportation of the 33 degree wort between states is legal because the wort is not technically alcohol at this point.
* Of the 27 locations, only the Eagan and St. Louis Park restaurants were retrofits, being Sydney’s and Timberlodge respectively in their prior lives.
* The Eagan location has the smallest number of fermenters but sells more beer than any other location.

One more first for a brewery tour, I wasn't offered a single sample at the conclusion of the tour.
Posted by Mag at 1:56 PM