What a beautiful night! 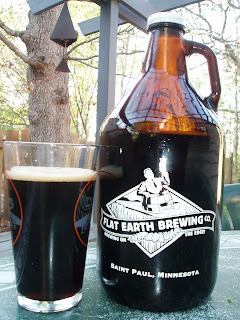 If you aren't outside on this beautiful Thursday night in Minnesota you are missing out! This is the time of year we have to remember both in the dead of January when it seems like the warmth and light of summer will never return as well as the dog days of August when we're wishing for a few flakes of snow to cool us off.

Even though I had to work later than usual today, all I could think about was getting home, grabbing a beer and getting out on the deck. The issue of what beer that would be was solved as I talked to Kat on my way home and she told me the Flat Earth Monkey Business (coconut infused Cygnus X-1 Porter) in my fridge tasted like an Almond Joy.
I'll have to agree with Scott that I'm not picking up quite that much coconut flavor but that doesn't mean it isn't just divine. A dark chocolate brown with Flat Earth's trademark head and just a touch of coconut to remind you this isn't the regular Cyguns, this is something special.
A beautiful evening on the deck with a great beer and Cleo hunting some little furry creature off in the woods. It really doesn't get much better than this...unless of course Mag stops on his way home and picks up something really tasty for dinner.
Posted by Mag at 5:13 PM