Things haven't been feeling too wintery lately but with all the recent rain fall is feeling closer. That being said it looks like the folks over at the Minnesota Craft Brewer's Guild have set a date for 2008 Winterfest. At this point there doesn't appear to be a location set nor a date when tickets go on sale although I feel fairly certain it will be December 1 at noon. In the meantime, mark your calendars for Friday, Feburary 8, 2008!
Posted by Mag at 3:24 PM No comments:

Found this Reuters story. Thank god we don't have bears or other dangerous animals at beer fests in Minnesota. Or maybe there was some confusion as to whether this deal in Belgrade was a bear fest or a beer fest?

BELGRADE, Serbia (Reuters) -- A 23-year old Serb was found dead and half-eaten in the bear cage of Belgrade Zoo at the weekend during the annual beer festival.
The man was found naked, with his clothes lying intact inside the cage. Two adult bears, Masha and Misha, had dragged the body to their feeding corner and reacted angrily when keepers tried to recover it.
"There's a good chance he was drunk or drugged. Only an idiot would jump into the bear cage," zoo director Vuk Bojovic told Reuters.
Local media reported that police found several mobile phones inside the cage, as well as bricks, stones and beer cans.
Posted by Mag at 5:42 AM No comments:

Our Balls Were Slippery and Cold Yesterday 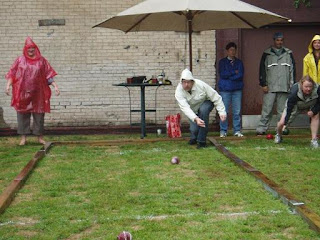 I must have bitched too much about the heat the the Great Taste of the Midwest. The beer gods saw fit to make Saturday's bocce tourney at Town Hall a chilly and wet one. But man was it fun. I can't wait to do it again. Makes me want to rethink putting a bocce court in our back-yard. Cleo'll just have to find somewhere else to poop. Kris and I teamed up with Lori and Paul and, despite our team's inexperience w/ bocce, we fared quite well. We didn't out-right beat any teams in getting our 2-1 record because of the time limits imposed, although we did lose our last game to a 15-pt scoring team that pulled out a nice little come-back. Despite our 2-1 record, which we thought was sure to get us to the next level in the tourney, we were passed over due to a relatively low point total in our three games. But hey, at least I got myself a bit lubricated. Of course, I knew that was happening when I found myself doing the whole ride-the-horse-slap-that-ass motion to our opponents after a good toss on my part. Misplaced hubris...gotta love it. Anyway, thanks to Lori and Paul for a fun Saturday. We'll get 'em next year!

Town Hall was serving a raspberry-infused scotch that was damn good. They also had a pale ale special (J Pale) using American Summit hops that was quite good and very, very hoppy as well as a Belgian ale w/ apricot, Ambrosia by name. I also tried Kris' English summer ale on cask. Yeah, one could probably sit around drinking that one all day. Nice session beer. It also had an amazing cascade when poured that you don't really see outside of some stouts. We stuck around long enough for the Double Hefe release. It was certainly big on flavor, although I didn't particularly enjoy it. I also broke down at the end of the day and had a Rodenbach sour. Pucker up, baby!

While in Tucson on business this week I thought I would try to get a local beer at J Bar, located on the Westin La Paloma resort property, where I was staying. Since Arizona isn’t exactly a hot bed of microbreweries I wasn't too optimistic but at least the 3 beers they had on tap were all microbrewed. I started out with a Lost Coast Downtown Brown Ale (out of Eureka, CA). It wasn’t the best brown I’ve ever had, but passable and a middle of the road beer as browns often are. Then next one I had was better. I was sure the bartender said it was a Lost Coast Cream Ale, but Lost Coast doesn’t appear to make a Cream Ale according to their website so I had to call the J Bar back for clarification. Turns out that it is actually Sandstone Cream Ale made by Thunder Canyon Brewery located in Tucson. It was a very nicely done cream ale- light in color but quite flavorful. For a resort bar in I thought someone did a nice job of making sure they had a good selection both on tap and in bottles (including Moose Drool, North Coast PranQster, a few imports and some other West Coast beers that I’ll have to see about giving a go to next time). That next time will be in January and since this is a resort (aka- out in the middle of nowhere) my beer options will be limited but thankfully will consist of more than just macro options. That being said, I’m happy to be back and enjoying a Crooked Tree IPA from Dark Horse Brewing Company that we picked up in Wisconsin, ON SUNDAY, on our way back from the Great Taste.
Posted by Mag at 5:05 PM No comments:

Sunday morning we headed over to Hyland park in Bloomington with Kat and Scott to take part in the 1st Annual Surly Open- Leave Your Balls @ Home. We were signed up for the afternoon session and were eager to start partaking in $1 Surly beers. Being there were only four of us and each team was to be made up of five people we got to make a new friend. Our new buddy Dave/David was clearly the best and most motivated disc golfer among us. I think he ended up finishing with a score of 66 and mine was somewhere around 112. No one came close to catching me for last place. That’s ok though, I was just happy not to have passed out climbing the hills…yes, the ones that the ski lifts take people up in the winter…particularly when I was carrying a tray of beers up to the rest of my team. The best part of the day though was after we were done hiking the course and due to the thirsty Surly Nation, Omar brought out a keg of Coffee Bender to replace the empty CynicAle keg. It looks like the event was officially a success as Surly’s site is advertising that there will be a 2nd Annual event. I just hope they pick a flatter course next year.
Posted by Mag at 6:40 PM 3 comments:

In our continuing search for places to drink good beer Mag and I picked up Kat and Scott and headed over to Common Roots Café on Lyndale in Minneapolis last night. I had read about this recently opened place and with their emphasis on local food and beer I was looking for a time to give it a try. We were given a good reason earlier this week when Surly sent out an email that Omar would be giving out free Bitter Brewer there at 7:30 Thursday night. Common Roots offers four beers on tap: Surly Bender, Surly CynicAle, Flat Earth Angry Planet IPA (their organic offering) and from Milwaukee, WI, Lakefront Organic ESB. While disappointed there was no Furious to be had I consoled myself with a Bender and happily ate my grilled cheese sandwich made with Gouda, Chevre and raw milk cheddar. I think I enjoyed my meal the most out of our group but since our real focus was the beer it all sufficed to pad our stomachs. About the time we finished our meal Omar had arrived and was setting up the pin of Bitter Brewer toward the back of the restaurant so we decided we’d better grab a table nearby. Heading back there we ran into Dave and Sharon and then Lori and Paul who had brought along Paul’s sister who was in town for a visit. So we pushed a few tables together, enjoyed some free Bitter Brewer and more purchased pints. Still in a drinking mood but looking for a broader selection our group headed across the street to the original Bulldog. I’d been to the new Bulldog NE previously but this was my first trip to the original. Walking in the door was like walking into a freezer so we headed out to their patio. It’s a cozy, completely enclosed patio so don’t expect to come here with a large group. The seven of us ended up crammed together around a table meant for four but since our waitress wouldn’t allow us to move another table over (fire restrictions) we made due. They do have a great selection of beers and seven varieties of Tator Tots! We got the Cajun and garlic ones along with some of their soft pretzels. While the Cajun Tator Tots and the soft pretzels were good, the garlic ones were outstanding! All in all we had a nice Thursday night filled with plenty of tasty beer which served to whet my whistle for Sunday’s Surly Open. I’m sure I’ll have the worst score of all of the participants, but I’m not too concerned…I’ll be spending the afternoon outside drinking $1 Surly beers.
Posted by Mag at 2:50 PM No comments: