Now that we are slowly and painfully climbing through the thick mud of a recession, listening to the wet-sucking of our GDP, chatter about the impact on craft beer has picked up. There are a couple of products/industries that are commonly touted as being recession-proof, including candy and beer. The explanation behind it is pretty simply. Folks may not be able to or want to buy a new car or a new stereo, but they'll still seek out the less expensive but enjoyable pleasures of beer. Of course, the discussion of beer being recession-proof has not been tested to the extent it is now in this craft-beer-crazy economy where premium prices go hand-in-hand with premium beers. This is the kind of crap that people who like to think they know what they are talking about but probably don't, like me, like to talk about (wow, what a painful, awkward sentence). Makes for good beer-chat.

Or it used to. Now this discussion is more than just idle beer musings. Now it's hitting close to home. I learned last night that a couple of friends have been laid-off. I've also got friends who are having their time/pay scaled back or are struggling to find jobs. There will certainly be more of this during the next couple of months. Now we'll all get to see just how recession proof beer is. Beer drinkers apparently aren't recession proof, but they are passionate and loyal. But passion and loyalty can only do so much. Hang in there gang. There is a light at the end of the tunnel and a friend at the end of the bar.
Posted by Mag at 7:49 AM 1 comment:

I know we have at least a few people that read our blog. Some of you leave comments, some of you reference a post when we see you and some of you poke us when it's been too long since the last post and you need some new reading material. I also figure it's possible that there are a few others that do none of the above but for some reason still check in to see what we've been up to from time to time.

James Norton from City Pages found our blog and contacted us a few weeks back for his Five Questions series. With it being the holidays I'm not sure I'm going to have anything too interesting to write for you for a couple days. Maybe our Five Questions responses will tide you over until we can come up with something better. Oh, and a belated Happy Thanksgiving! May you have recovered enough from yesterday's food coma to be ready to do it again today.
Posted by Mag at 4:33 AM 3 comments:

I finally made it to the Blue Door. The first time we tried to go, we were going to meet Kat & Scott there. They arrived first, told us there were so many people waiting that there was no more room to wait. Since then, Mag has gone there for lunch during the week and we’ve talked about trying to go up there again however it usually ends up being a Thursday, Friday or Saturday and we have figured it would be packed so haven’t even tried. Last night Mag suggested that we go up there for a late dinner. Figuring that if there would ever be a time when they wouldn’t be too busy, a Sunday night at 7:30 should be it. Sort of.

When we arrived all the tables and the seats at the bar were filled except for one booth. If you’ve been there, this isn’t saying much since I can’t imagine they can seat more than 50 or 60. Anyway, glad to have gotten a table I was even happier to see that they had Lift Bridge Harvester on tap. Mmmmmmm. After enjoying ½ of the growler of Flat Earth cherry infused porter (gotta make sure there's an empty one to get filled with hazelnut this week) earlier I was ready for something else.

At first our server told me it would be a few minutes on the Harvester as they had to change the keg. Then she came back and delivered the bad news…they were out of Harvester. Disappointing, but since they also had Lagunitas IPA that was an easy back up plan.

With beer on the way we felt compelled to give their Spam bites a try. After placing that order and waiting for the beer, our server came back empty handed. I thought for sure she was going to tell me they were also out of the IPA. No. Instead it was the Spam bites they were out of. Blow number two for the night. Deciding that we didn’t really need an appetizer both of us ordered their Jucy Blucey with some tots. This was what I had come for.

Even after the disappointment of no Harvester and no Spam bites, the Blucey made up for it. I mean really, what’s not to like about a hamburger stuffed with pepperjack cheese and topped with peanut butter and bacon? My only criticism was that I think it could have done without the mayo. Oh well, next time I’ll ask that they leave it off, because yes, there will be a next time. I’ll have to steel myself for a likely wait for a table but with a pretty good beer selection and their food to look forward to it’ll be worth it. In fact, I can’t imagine much better than nabbing a seat in this cozy joint on a bitter cold winter day.
Posted by Mag at 5:44 AM 4 comments:

Is there ANY chance?

A couple blocks from our house there was a Bakers Square restaurant that abruptly closed oh, six months or so ago, leaving us high and dry for drive through pie. Since then the place has been empty with the exception of some work to remove/clean up whatever was left inside. The other day when Cleo and I were out for a walk I saw a sign had been put up. I know it's foolish to even think it might be something good, but one can hope, right? You don't have something up your sleeve for the south metro do you, Omar?
Posted by Mag at 9:59 AM 5 comments: 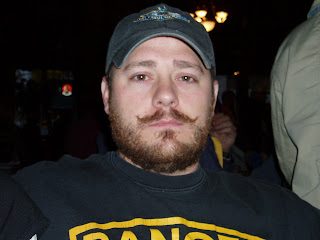 There are many reasons to love our local brewers and the beers they produce. Besides being cool people in general, with jobs most of the rest of us are envious of, they are extremely creative. Last night I made it up to Flat Earth’s growler fill day, lured by the introduction of Starman Porter, their porter infused with star anise from Penzey’s that had been soaked in Ouzo. I was pretty sure I’d at least like it but man, this stuff is really good! The anise flavor is certainly there but not overpowering and I’m going out on a limb betting that even black-licorice-averse Mag is going to enjoy it. Luckily after gabbing with Jeff, Mikey, Drunk Dave, and the other folks that showed up to get growlers Kat and I were able to score the last two growlers of this ambrosia. Note to self: Next time, buy first, gab second.

While I had planned to go straight home after picking up my growlers, and possibly doing something productive, Kat and I decided a better plan would be to grab some dinner. We offered to have Scott and Mag join us but they both declined so we headed off to Great Waters. Some event must have been going on from the looks of the parking situation and how full GW was but we were able to get a table in the bar with a minimal wait. Just after we ordered our drinks, Bob, who was there brewing with Joel came over to say hi. He confirmed our theory that while there may be a recession going on in some parts of the economy, that is not the case with the beer crowd. They have apparently been going through their brews at an incredible pace. Luckily I was able to have a couple pints of what I assume was brewed for Halloween, Hop Scare. It’s hoppy, but not over the top, and a true joy to drink. If I would have had an extra growler in the car I would have taken some home, but that not being the case I may have to resort to plan B: seeing if I can get Scott to share some of his.
Posted by Mag at 6:30 AM 2 comments:

Well, Kris and I had a pretty interesting weekend...and a weird one. Friday night we attended a zombie-themed Halloween costume party at Gene & Jeff's. They put on a very impressive show for Halloween that draws in hundreds of people. The last I heard, they'd had 212 trick-or-treaters. We usually spend the first couple of hours out front, scaring kids and acting like dorks. Following that, we sit around inside drinking beer and...acting like dorks. Much of the crowd in attendance is a beer-saavy crowd, you so can ususally find something good to drink. Kris and I brought growlers of Barley John's Oktoberfest and Great Waters St. Peters Pale. I didn't care much for the Oktoberfest, but the Pale was as good as usual. And I had my first taste of this year's Darkness from Surly. As I was a one-armed zombie with an exposed brain, I had a helluva time getting my beers open, getting through doorways holding my beer, and...uh, relieving myself. All in all, a good time was had by all.

On Saturday the Blue Nile held Ale Saints Day, a porter/stout party schemed up by Al. Lots of friends showed up, and that made for a very good time. The turn-out was great and the beers 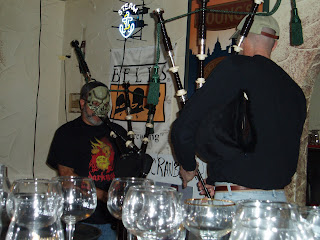 were phenomenal. Between Kris and I we had the Bell's Porter cask, 2007 Bell's Expedition Stout, North Coast Old Rasputin, Leinenkugel's Big Eddy, Moylan's Imperial Stout (Ryan O'Sullivans), Southern Tier Oatmeal Stout, and some others we can't recall. There were a few we wanted to try but never got around to. Of course, we could have bought $2 samplers and tried more beer, but we both decided we needed pints.

Anyway, at some point I was struck by what an unusual amalgam of themes were being presented. Here we were, at an Ethiopian restaurant with many folks dressed up in Halloween costumes, drinking beer with a hard-core beer crowd while bag-pipers honked to their heart's content. Totally weird...certainly fun. I've actually never eaten at Blue Nile, for some unknown reason, despite their reputation for good chow. Kris and I talked about grabbing some dinner there, but those plans were derailed when there was a somewhat drunken rally cry raised for fried egg sammiches at The Herkimer. Now, I'd previously had the fried egg sammich at The Herkimer and I'd proclaimed it the best fried egg sammich I'd ever had (I was sober, btw). But last night they disappointed me. The yolk had been cooked all the way through, so there was no goooshy factor to the sammich (over-hard vs. over-easy?).

Anyway, candy, beer and fried egg sandwiches generally make for a good weekend. And a good weekend it was indeed.
Posted by Mag at 3:08 PM 1 comment: