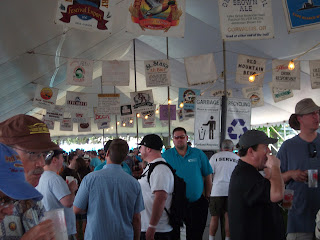 I have a pretty solid ritual when it comes to writing about a beer fest: grab my notes (for memory assistance on my favorites), grab a copy of the program (for the full names of the beers and their corresponding breweries) and plug in the camera (for things I may have forgotten but seemed worth taking a picture of at the time). This year I just sat down and knew, for the first time, there were two clear, stand-out winners in my mind at the Oregon Brewers Festival. This excludes any Buzz Tent beers, but I’ll get around to more about that in a little bit. 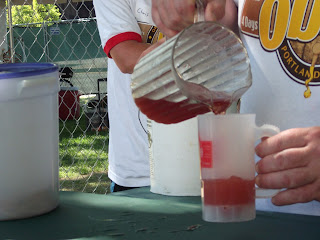 #1 – Old Market Pub & Brewery Berried Alive! Belgian Boysenberry Ale
It seemed there were quite a few more fruit beers at the festival this year but as is often the case, particularly with fruit beers, there’s a wide range in how well they’re made. This beer was chock full of fruit flavor, nothing artificial, sported a beautiful color and hit that just right balance of sweet and tart.
#2 – Dogfish Head Black & Red Raspberry Mint Imperial Stout
This is one of those love it or hate it beers and in all honesty, when I decided to get a sample of it I didn’t think I was going to like it. Oh, how wrong I was. Besides the pleasing combination of flavors, it was the incredible mouthfeel that hooked me. Not many beers have that silky, velvet-in-the-mouth quality so when I find one that does it’s memorable. Finally, this had to be the best deal of the festival, 10% ABV and not in the Buzz Tent. 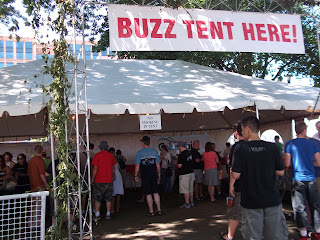 Circling back to my earlier mention of this year’s Buzz Tent, I must warn you, this is where things are going to get a little negative. I generally follow the “if you can’t say anything nice, don’t say anything at all” rule in my musings but I would be remiss if I didn’t mention my disappointment in the Buzz Tent as a whole. Last year the Buzz Tent was well run, but this year there were three huge issues:
Although the disappointments of the Buzz Tent are something that the organizers need to take a long, hard look at, overall, I still enjoyed the festival and am sure I’ll be returning next year.
Thanks go out to festival organizer Chris Crabb for contacting me about a media pass and providing me with a mug and a portion of the tokens that fueled my OBF adventure.
Posted by Kris at 12:47 PM 2 comments:

With sour beers being my most recent infatuation I thought I would be more excited by the weeklong Puckerfest at Belmont Station and more motivated to get over there, ensuring I was able to try as many of sour beers they planned to have on tap as I could.
The first day of Puckerfest was a Monday, the day of the week I’m least likely to make it anywhere. I was seriously jealous reading about the great sour beers people in my Twitterverse were trying. The same was true for the next couple of nights but my envy also came to be tempered by the “too many beer events going on that I just have to accept I’m not going to make it to all of them” understanding that has become part of my life since moving here.
Then Friday afternoon the opportunity to swing by Belmont Station presented itself. I almost didn’t stop, having just left the Cheese Bar after a delicious lunch with friends and being on my way home where there were things awaiting my attention. As it happened, my path took me directly by Belmont Station. Had I been a couple blocks north or south I probably would haven’t stopped but I figured it wouldn’t be right NOT to stop in since I was driving directly by it.
Once inside I think I probably spent a good five minutes deciding what to order. I had decided that I’d only order two of the smallest size so making the “right” ordering decision was critical. I finally narrowed it down to Block 15 Ferme de La Ville 2011, primarily because it was one of the offerings with Brett in it, and was debating my second selection when I heard a couple people at the bar raving about Walking Man Foot Funk. I had considered this beer, but in all honesty, it was the name that was turning me off as I find feet to be repulsive but I decided to put it out of my mind and go with the overheard recommendation.
The Ferme de La Ville was good, slightly dry and exceptionally drinkable, a great beer for the gorgeous, warm, sunny afternoon. But as soon as I had my first sip of Foot Funk I was in love. Tart, sour, a little funky, it was so good I don’t think I can even convey its awesomeness. And if you had walked by the table I was sitting at you probably would have wondered what was wrong with the short redhead with the stupid smile and slightly glazed look on her face.
It’s unlikely I’ll be able to make it back before Puckerfest is over. That means I’ll probably miss at least two or three other sours beers that would knock my socks off and many more I’d enjoy. But I’m ok with that because those three or four ounces of Foot Funk were that good.
Posted by Kris at 1:51 PM 1 comment:

At most beer festivals you’ll find the beer being poured out of kegs, firkins and the occasional bottle. At the first ever Cans Fest, from Jesse Cornett and The Guild Pub, there was none of that (almost none, but we’ll get to that a bit later).
Prior to the event, I went about my usual beer geek ways and poured over the final line-up of beers. I counted a total of 35 beers and to the best of my memory 11 of them were ones that I had never tasted or I didn’t recall seeing available for purchase at The Beermongers, Belmont Station and the like. My plan of attack, and subsequent “listing”, was to focus on the latter and if I had the time, energy or sobriety I would move on to some of the rest.
Overall, none of the beers blew me away. However that’s not to say that I didn’t enjoy the fest. It was great to try a bunch of new-to-me beers and it’s exciting to see more and more breweries embracing the canning of beer. My favorite beer, Trailhead from Two Beers out of , was a style I had not seen before, India-style Session Ale. It combined a slight sweetness and maltiness with just enough hops to tickle my tastebuds.
Probably my favorite part of the fest though was something I didn’t even know about until I got there: a side-by-side keg vs can taste test. Put on by one of ’s own nano-breweries, Natian, they were offering their La Luz Summer Session Ale, poured by a new Twitter acquaintance, Emily. Mag and I made opposite guesses (as it turned out my guess was correct). There weren’t huge differences but certainly enough to back up thoughts I’d had in the past, either, “Gosh, this tastes better than I remember when I had it on tap,” or visa versa.
Like many first time festivals, there is probably a laundry list of things the organizers will improve upon or do differently next year. I’m happy to say though that from an attendee perspective, for the first time out of the gate, it was a good showing. I look forward to, and hope there will be, the Second Annual Cans Fest next year.
Finally, a thanks to Ryan and The Guild for finding me and awarding me one of the VIP tickets.
Posted by Kris at 2:35 PM No comments:

For those of you who don’t live in , or just crawled out from under your based rock, July is Oregon Craft Beer Month. The start of the month was also nearly the start of our cabin stay for the 4th of July weekend meaning what I’d be drinking for the first few days would be what I brought along since having the furry child in tow squashes any plans of checking out local joints.
As it turned out, the beer we ended up acquiring was indeed Oregon made: Full Sail IPA (Trader Joe’s carried it and I was already there) and Rogue Ditoir Black Lager and XS Imperial YSB (we hit the Green Dragon garage sale before heading out of town). Happily we both agreed the IPA had just the right combination of flavors that this could become a staple in our house. And for me, I could forget the fact that the Rogue was a lager and concentrate on its close resemblance to the much loved CDA-style brews. Finally, the YSB was not only tasty but came in the cute little bottles I first became acquainted with back in my early craft beer days when I’d buy Little Kings frequently.
People have different personal goals for the month: some to drink only beers, some to drink new-to-them beers, some to visit breweries. As much as I love my new state and the many fine brews made here I’m quite the whore when it comes to craft beer in general. I’m up for trying anything new, shiny, weird or otherwise. So I think the best I can ascribe to is that any day I’m drinking beer, I’ll have at least one brewed beer.
So here’s Oregon Craft Beer! Drink, enjoy and remember if you’re not here you’re welcome to play along at home.
Posted by Kris at 2:47 PM No comments: