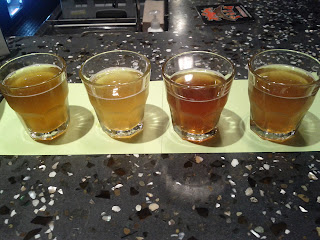 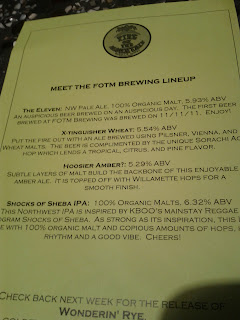 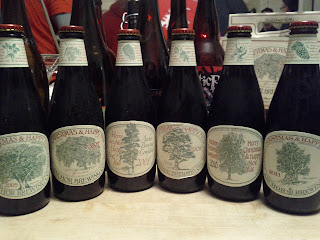 Three other beers of note from the night were Breakside Brewery Soursop Wheat, New EnglandBrewing Company Imperial Stout Trooper and Three Floyds Brewing Arctic Panzer Wolf. These three probably couldn’t have been more different, ranging from a delightfully, light sour beer, to a chocolate, roasty imperial stout to a huge hop bomb.
Sunday afternoon I had my second chance to get beer geeky at The Beermongers’ Cellar Dip. Sean brought out some treats, as did the other beer geeks that showed up. There weren’t any verticals but the vast majority of beers were ones that were not possible to get here. Some were personally brought back, others had been sent by friends and others came as the result of trades. Three Floyds once again came in my top three, this time with their 2009 Behemoth Blonde Barleywine, along with the now closed Roots Organic Brewing Epic Ale and HoppinFrog Brewery Barrel Aged Naked Evil Belgianesque Barleywine.
It was a busy weekend for this beer geek. Thanks to everyone that helped make it such a good time.
﻿
Posted by Kris at 8:20 PM No comments:

Brewing with PBS at Coalition 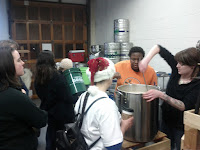 I’ve never brewed commercially. In fact, I’ve never brewed anything larger than what our standard-sized home brewing set up can handle. And even though that equipment made the cut on what to keep and what to get rid of when we moved to Portland, we haven’t used it since well before the move. Sunday I had the opportunity to help brew, this time in a real brewery, albeit on a small system. 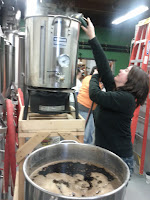 The Saturday prior I had attended a Pink Boots Society meeting where there were a number of LOLA members and other ladies from the local brewing scene. One of the things discussed was what type of brew would be made the following week and in the end the decision was made to go with a chocolate raspberry porter. Besides being a collaborative brew, brewed on the equipment Coalition uses for its Coalator program, the final product is destined to be part of The New School Beer Blog’s New Year’s Eve party. The bash will be held at Burnside Brewing and proceeds will benefit local charities. 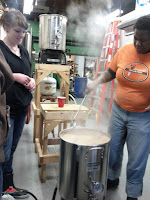 Although I wasn’t able to stay the entire time I did get to sample the fresh, hot wort. It was darn tasty, like real maple syrup, although not quite as sweet. The raspberry puree was added near the end of the boil and I look forward to trying it in a couple weeks when it’s ready to be kegged. 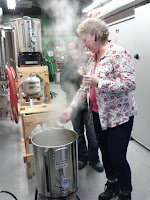 Thank you to Coalition for the use of the space and equipment, Great Western Malting for the malt, to Lee for heading up the brewing and to all the great ladies for a few fun hours brewing.

Debut of The Commons

Like many young adults who are put their childhood on the shelf, reach toward adult status and vary their name to something they feel is more reflective of the person they are trying to be, Beetje Brewery has become The Commons Brewery. They’ve upgraded their accommodations from what was surely becoming a very crowded garage with a 1bbl system to a shiny, yet unpretentious, space with a 7bbl system in SE Portland. 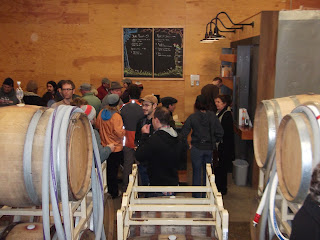 Saturday marked their official opening to the public and it was exactly what I needed, having come from the far-too-crowded-for-me environs of the second to last day of the Holiday Ale Fest. This, this is the kind of place I expected to, and did, see many of my fellow beer geeks. In the course of chatting we made it through a sampling of the seven beers available: Urban Farmhouse Ale and Flemish Kiss from their year round selection, Sticke, a seasonal, and four in the Beetje Series, Fleur de Ferme, Rooibos, Touch of Essex and BBL 1. My favorite of the group, no surprise, was BBL 1, a tart barrel blend. 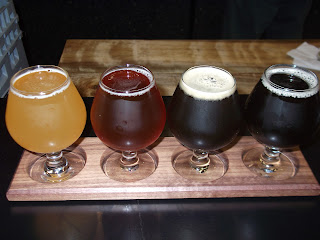 I was one of their followers who was sad to see the Beetje name officially change, but they’ll always be Beetje to me. Just like I’ll always be known as “Krissy” to a handful of people who are very dear to me.

Email ThisBlogThis!Share to TwitterShare to FacebookShare to Pinterest
Labels: Beetje, The Commons 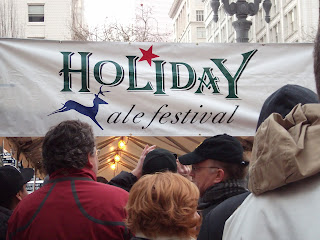 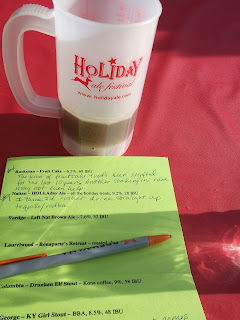 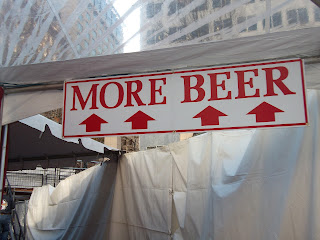 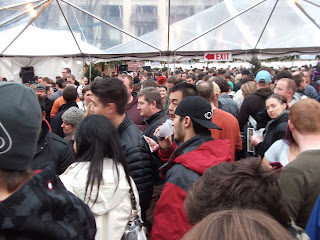 While I may complain about some of the beers, you won't find me dwelling on them. In fact, if you ask me in a couple months which beers those were I will likely have to pull up this post to remember. And for the critiques of the water and re-entry issues, well, I'm an event planner and I can find things that need to be improved upon at nearly any event. So no hard feelings, friends. You win some, you lose some. And there will always be more beer to enjoy.
Posted by Kris at 8:04 PM 1 comment: