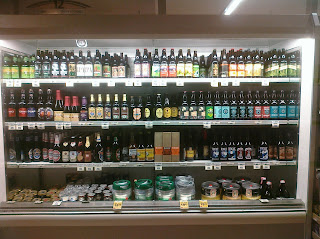 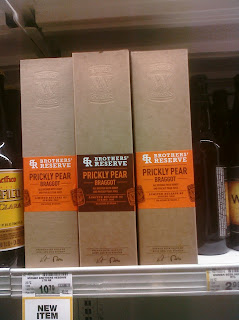 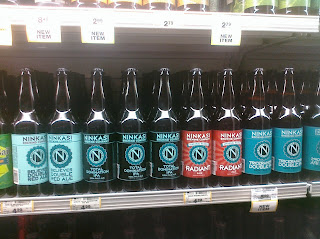 'Twas out with some beer drinking friends about two weeks ago doing what beer drinking friends do best, namely drinking beer and talking at an unreasonable volume about inappropriate things, when I came across Something Curious. Now, those of you who've made a go of it behind a bar may have seen This before and probably didn't think much of It. Frankly, the concept behind This makes a lot of sense from a business perspective. The Curiosity in question is a "leave-behind" produced by a brewery and likely provided by a distributor to a bar owned by a friend. I'll remain silent on the brewery and the bar. I took numerous pictures of said Curiosity, but alas, only one picture survived my ham-handed attempts. 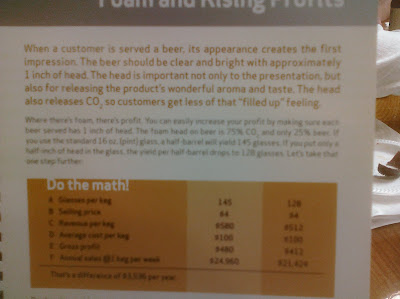 The Item was a Little Guidebook on serving beer. Sorry, my photo sucks. The section in this Book that caught my attention was about how to manage the foam levels in a beer in order to enhance profits. By pouring a pint glass with 1" of head, versus no head, you can get 145 16 oz. glasses of beer out of a keg. With no head, you can only get 128 16 oz. glasses of beer from a keg. Assuming you sell one keg of beer a week, this can result in about $3,500 extra gross profit to a bar per year.
Now, to be fair, this book did explain the virtues of head. Namely, foam is an important aspect of the presentation, releases aroma and helps with the overall tasting experience, and also apparently helps drinkers from getting a "filled up" feeling (no, the brewery was not MillerCoors). But given that the title of this section was "Foam and Rising Profits," I can't help but feel that these benefits were provided simply to assuage any guilt that an honorable barkeep might have regarding purposefully pouring a heady beer, a 1 inch heady beer at that, and possibly causing a patron to grumble about getting shorted a bit on the product for which they are paying.
I'm a bit torn. I like a bit of head on my beer. But I also like the places I frequent to profit from my being there. I guess I just don't like thinking that my bartender might be pouring my beer with head so as to eke out that extra $68 of gross profit per keg and not because he/she wants to ensure I have have an enjoyable product. I think seeing this Little Book was akin to Dorothy's seeing that man behind the curtain. Gah, what a hypocritical, fantasy-dwelling rube I am!!!
Posted by Mag at 4:17 PM No comments:

To Muse or Not To Muse

Our impending move to Portland is fraught with anxiety and uncertainty.  The decision to "go west, young man," was indubitably sound in the midst of a Minnesota winter, but now that we're in the balmy throes of spring with summer 'round the corner, the logic begins to look suspect.  Does it make sense to leave friends and family behind, some of whom we may not see again?  Certainly, career-wise and financially the move doesn't make sense.  We've got a pretty nice thing going, socially, in the Twin Cities.  Those bridges aren't burned, but they currently smolder.  Pardon my mixed-metaphor, but the siren-song of the greener grass over yonder fence beckoned…and thus we go, for good or for ill.

Ours is a household where practicality and logic reign (or so we like to think).  And yet this decision, based strongly on emotion and hope, is contrary to our natural inclination.  As much as this might be a warning sign of a regrettable decision, I think this may be cathartic, in a way.  Life is short and, I suspect, the list of regrets may be long by the time the wife cashes my first life insurance check.  I hope that on the tally of my life, the box titled, "made stupid/ill-conceived, emotionally-driven, financially-ruinous yet ultimately fulfilling decision," is not unchecked at the end of the day.

These thoughts are a bit contemplative and sobering on a Friday morning.  We'll see how they play out on a Friday evening with a few belts under my…er…belt.  And at the end of the day, and at the western edge of our nation, I'm sure Portland will provide as many catalysts and causes for beer musings as the Twin Cities have.  And while the observations may focus more on my fleas, the homeless, the crazy hippies and those d-bags from California, I'm sure the irreverent tone and sophomoric content will remain the same.

Kris Will Miss: The Beginning

With our impending move quickly approaching the two week out mark, the things (and people) I’ll miss pop to mind around every corner. I don’t know that I’ll get around to all of them before The Moving Day, but here’s one to start it off.

The Blue Door Pub
They haven’t been around long but they’ve made a huge impression both on beer lovers and burger lovers. Being both, I can’t get enough of this place.

Last week we went and I knew I had to try out the Gatsby. It was yummy. But so was the Oatmeal Stout from Summit; somewhat “out of season” by some standards but for the stout lover, it’s always welcome. And the Furious. Can’t go wrong with a Furious.

This week, “dragged” along by the Shervey’s I had to revert to my personal favorite, the Jiffy Burger. Peanut butter, cheese, mayo, pickles, bacon, beef – someone had a revelation of deliciousness when they thought this one up! I also greatly enjoyed the Latin Kisses, fresh jalapenos stuffed with cream cheese, wrapped in thick cut, caramelized bacon. The beers this time were closer together and a bit more seasonal – Summit Horizon Red and Bells Oberon – but none the less tasty.

As an aside, something that I won’t have to miss, and I must give tons of credit to for helping me remember what I drank a month, a week, or possibly a day ago is HopChart. You’re awesome and we’ll be keeping in touch as I drink down the beers in Portland.
Posted by Mag at 9:56 AM No comments:

My favorite beverage and quite possibly my favorite food, they go together so well. And finding a place that serves quality offerings of each, well, that’s about as good as it gets.

There are a few places in town, Buster’s on 28th and the Gnome pop to mind first, that carry excellent cheese and excellent beer. But did you know Faribault has a place, too? It’s The Cheese Cave, a retail cheese shop that also has a demonstration kitchen AND serves beer.

Last night was celebrity bartender night and since Mag is friends with one of the folks that would be pouring, we hopped in the car and headed down 35 with the McG’s. Bellying up to the bar behind the retail section of The Cave we found a great selection: four Summit brews on tap (Oatmeal Stout, Horizon Red, Maibock, and Extra Pale Ale), four Odell brews in bottles (5 Barrel Pale Ale, 90 Shilling, St. Lupulin, and IPA), and to appease the non-craft crowd, bottles of MGD. That’s a pretty good line up for a small place anywhere, much less in a town of less than 15,000 people.

I started off with the Oatmeal Stout – oh, the creamy goodness! But since the rest of the group was drinking Odell brews I finished my pint of creaminess and followed the herd. That was the right choice as I haven’t been to the liquor store since they hit the Minnesota market and I had forgotten just how much I enjoy their beer. The IPA particularly hit the spot (maybe it was the bitterness of the day) and who doesn’t enjoy a bucking elephant?

As would be expected from a place named The Cheese Cave, they have excellent cheese. They serve as a retail outlet for the Faribault Dairy Company (ya know, those folks who make St. Pete’s) but also offer a wide variety of cheeses from around the region and across the country. We got two of their cheese plates – one with three blue cheeses and one with, well, three other cheeses. Don’t get me wrong, the three I can’t remember were really good, too, but they were all white and since I didn’t lift one of their menus on the way out you’ll just have to trust me that it was worth getting.

I’ll beat you to the punch and apologize right now for writing as much or more about the cheese as the beer. And for not having any pictures. I know you like to look. Anyway, if beer and cheese is your thing, too, the short drive down 35 should be on your to do list.
Posted by Mag at 8:46 AM 1 comment: