Sage, an herb I’ve come to really enjoy after growing a plant this year, managed to find its way into my mouth twice yesterday. Twice in very delicious, however very different ways. 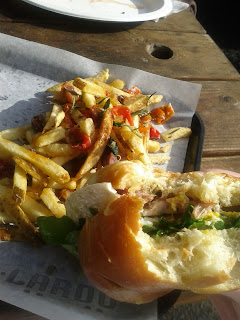 Hitting up a food cart pod for lunch before doing some beer shopping I couldn’t pass up a pork belly sandwich from Lardo. And I figured as long as I was in it that far, I might as well add on some of their Lardo fries (fried in actual pork fat), especially since they were offering them “dirty”: with pork bits and MamaLil’s peppers. When they came out not only were there pork and peppers, but also fried pieces of rosemary and yes, sage! I don’t know whose idea it was to fry up some sage leaves but not only did it keep them brilliantly green but really tasty.


Fast forward a few hours to the Halloween party we attended. I knew ahead of time that there would be a keg of Blackberry Sage Porter brewed especially for the party from Short Snout Brewing, with the help of the evening’s host, Michael. Having been impressed by all of the Short Snout beers I’ve had to date, I was excited to try another one and one with an interesting combination of ingredients to boot. The beer was absolutely delicious and extremely sessionable. While a sage flavor didn’t stand out, it certainly served a supporting role, complimenting the blackberry. With any luck Short Snout’s Kickstarter campaign will be successful and more folks will get to try this amazing beer.
Posted by Kris at 12:04 PM 1 comment:

Last night we did a very uncharacteristic thing for the McDs, we opted not to go to a beer fest, the Fresh Hop Tastival at . Instead we hit Fire on the Mountain for the most delicious wings on the planet and even though being stuffed, decided to stop by The Beermongers on the way home.
It had been too long since our last visit but as always, we were welcomed back with open arms and a chalkboard full of interesting choices on tap. With it being fall, Mag ordered up an Oktoberfest from one of the newest breweries, Occidental, and with me being me, I couldn’t pass up the black IPA. I am in agreement that they are not black IPAs, but CDAs, however that’s the official name of the beer.
Beyond the pull of a black IPA/CDA, it was also from Uinta, which is a new-to-this-market brewery, out of of all places. To date I’ve only Punk’n, and while it was fine, it didn’t knock my socks off. However, I’ve continued to hear good things about their other beers and I’m always interested to try something new.
The imperial pint poured black as night and the aroma hinted strongly that I was going to be pleased with my selection. Taking my first drink, “pleased” was an understatement to the degree of saying bacon tastes fine. No, bacon is one of the most delicious foods and this beer, Dubhe (pronounced Doo-bee) Imperial Black IPA, is one of the most delicious black IPAs ever. Not only does it offer the strong hop hit of an IPA, but it’s also a full bodied beer that coats the mouth and lingers. To get something this intense I would suspect there would be a corresponding sweetness that would make it difficult to get through. Not so. What made this pint last so long in front of me was that with each drink I savored it and enjoyed the aftertaste nearly as thoroughly.
The cherry on top of it all was that not only did The Beermongers have this on tap, but in bottles, too! Of course I had to take a couple home with me and as I was preparing to write this morning, the thought did actually cross my mind to crack one open. It’s that good.
Posted by Kris at 6:20 AM 2 comments: