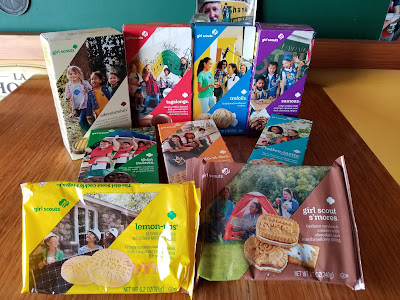 It's Girl Scout cookie time and that can mean only one thing: our annual cookies and beer pairing at The BeerMongers. In keeping with tradition Chris procured the cookies and we set a date to see what kind of pairing magic we could make happen.

As has been the case in recent years, the Girl Scouts introduced a new cookie this year. Called Adventurefuls, it's described as an "indulgent brownie-inspired cookie topped with caramel flavored creme with a hint of sea salt." In our expert opinion, this cookie was disappointing both in overall flavor and the fact that even though it is supposed to be brownie-inspired, it is a crunchy cookie. Indulgent brownies are not crunchy ever. Flavor-wise, it missed the indulgent mark as well and as such, the most successful pairings were ones that overpowered the flavor of the cookie. 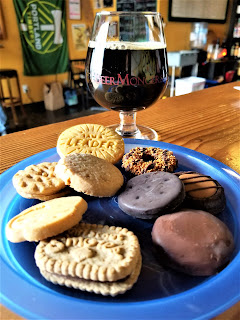 The beers that we found the most success with were all boldly flavored beers that were actually quite different from one another. Early in the game Mag couldn't resist the pull of the cute mini-cans of Harviestoun Ola Dubh 18 Year Special Reserve. The 8.4-ounce cans of "black oil" imperial porter aged in Highland Park whisky casks clock in at a moderate 8% ABV. Kris particularly loved it paired with the S'mores cookies and would have happily grabbed a couple of cans and a box of the cookies to enjoy in the corner by herself. Mag took a chance and found an unexpectedly delicious pairing of it with the Lemon-Ups.

Although we all agree that Thin Mints are one of the great classic of the Girl Scout cookies lineup, they can be challenging to pair. Looking back at previous pairings, we've found nearly as many beers that worked with them as those that didn't, including Oskar Blues Ten Fiddy in which one vintage worked and another didn't. Ola Dubh goes down in the "works" side of things, having enough body to balance the mint of the cookie. 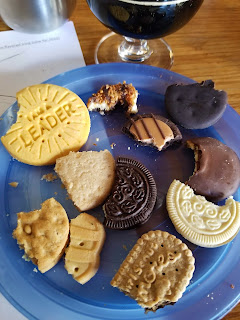 Knowing that we've had a fair amount of success with fruit-forward beers, Chris grabbed a can of Energy City Bistro Raspberry & Blackberry Crumble. The Berliner-style Weisse beer out of Batavia, IL is made with blackberries, cinnamon and brown sugar added after fermentation. It went very well with the majority of the cookies, including Do-si-does (oatmeal sandwich cookies with peanut butter filling) where it was reminiscent of a peanut butter and jelly sandwich. With the Samoas, whose coconut can sometimes be problematic to pair, it took our tastebuds to the land of a rhubarb crumble just like grandma made.

Another beer that paired well was Schloss Eggenberg Samichlaus Classic triplebock. The Austria import is a big one (14% ABV) that is only brewed once per year (on December 6) and is then aged for 10 months before bottling, or in the case of things today, canning. Due to its powerful flavor it did overpower some of the cookies but where it worked, it WORKED! 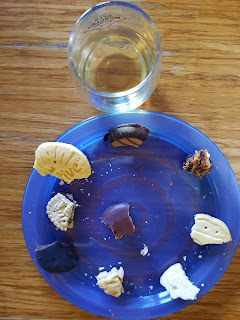 One of those was Do-si-does and another was with S'mores, where the beer became slightly more bitter, but in a good way, when enjoyed with the cookies. Kris and Chris were split on it's ability to pair with Samoas with Kris enjoying it thoroughly where Chris was set against it.

As the years of these pairings have gone by we have realized that the limiting factor isn't our imagination or interest in continuing to test beer and cookie combos out but by how much sugar we can handle before we throw in the towel. Nevertheless, it's a yearly game that's anticipated and enjoyed in the moment. It's just a good thing that Girl Scout cookie time comes around only once per year.

So until next year, support your local Girl Scout and buy some cookies. Maybe give some pairings a try yourself or just toss a few sleeves of Thin Mints deep into the freezer for later enjoyment.