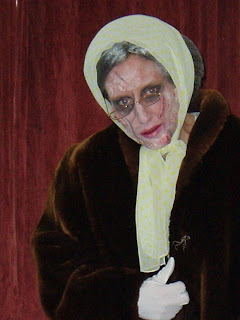 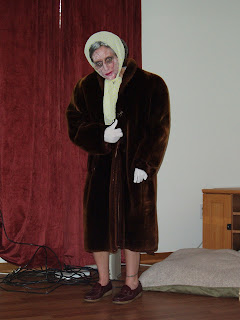 ...is Halloween and damn I'm excited! I put the finishing touches on my costume and make up over the weekend and Mag finished his up tonight. Last year I found a great blood recipe and this year a recipe for rotting flesh (perfect for the zombie party Gene and Jeff are hosting) and one for scars (who knew Hubba Bubba was good for anything else besides blowing huge bubbles). Here are the practice shots. Notice my fabulous White Elephant coat and stylish orthopedic granny shoes.
Posted by Mag at 5:37 PM 1 comment:

I had the good fortune to be able to volunteer at another Surly event yesterday, this time for their Darkness Day. I hadn't made it to any prior Darkness releases and I wasn't able to get to this one as early as I would have liked on account of some edumacational classes I'm taking on Saturday mornings. Nonetheless, by the time I got there with Kat and Sharon, things were still hopping, but I think the apex of the day was behind us. But it was still a madhouse. Cool shit. It was a great event, although I wish Surly had been able to bottle more Darkness for the event. I talked to quite a few disappointed folks yesterday. Cest la vie, I guess. As a volunteer, I was guaranteed 6 bottles of the good-stuff without having to brave the long lines, and I took full advantage of that. Since I'm a huge proponent of all things bulleted...
Out. Cheers.
Posted by Mag at 6:45 AM 5 comments:

Officially back in the States

Our vacation to Toronto is officially over, as evidenced by the two of us showing up at our respective places of employment this morning. However this was preceded by a fine day of lying around the house, doing little if anything productive, yesterday.

You’ve heard Mag’s take on the trip (or at least the first part of it), so now it’s my turn. I have to echo his comments on how nice the Canadians are. Maybe it’s just the Toronto-ites, but I felt almost too much of a b&%*# even to be visiting. There’s probably a niceness test potential transplants have to take to be let in and I’m pretty sure I’d fail it. Still it was nice to see more people being helpful than I’m used to at home.

But enough of the nice and on to the beer. I’d have to give the Beer I Was Most Surprised I Enjoyed So Much award to Amsterdam’s Natural Blond Lager. Now before you go thinking I’ve lost my mind let me say that none of the lagers I tasted in Toronto had the nasty lager aftertaste and smell I’ve become accustomed to here. And for the blond part, for once it didn’t mean tasteless. This beer actually had quite a bit of flavor and good flavor.

The next award also has to go to Amsterdam, for the Beer I Most Regretted the Airline Nazis Prevented Me From Bringing Home. This would be for their Framboise, delicious raspberry nectar that I know our friends would have loved to have been able to try. It was sweet, but not overly so and at only 6.5% it’s not going to knock you over too quickly.

My final award, for Most Balanced Yet Flavorful Beer, goes to Great Lakes Brewing for their Peach & Pepper beer. Unfortunately for the general consumer, this has not yet made it to their line up. They only made 1 cask of it, especially for Volo’s Cask Beer Days. I didn’t know that at the time as Cask Days was before we visited Great Lakes but I was even happier upon hearing it that I had taken my opportunity when it came along. This beer, brewed with home grown peaches and jalapeno peppers, it exactly what it says it is and completely balanced. The peaches hit you first, followed by a hot, but not inferno hot, shot of jalapeno pepper.

There was plenty more to the trip than just the above so if you’re interested in hearing more, just ask next time we’re out drinking together. And if you’re considering a trip to Toronto yourself, do it!
Posted by Mag at 5:27 PM No comments:

Kris and I are still in Toronto, eh, and having a good time. It's been a pretty good trip, thus far. My preliminary thoughts:
Yay Canada. Cheers!
Posted by Mag at 5:01 AM 1 comment:

Yep, you heard right, tomorrow morning we're off to Toronto for 5 days of checking out their craft beer scene...and I suppose a few touristy things, too. We've learned the hard way that starting drinking early in the day can mean in bed by 6 pm. Plus, they have a castle! So, adios, enjoy your weekend and hopefully we'll have lots of fun stuff to tell you about when we get back.
Posted by Mag at 12:48 PM 1 comment:

Last night we attempted to check out The Blue Door. We’d heard great things about it, both in terms of their beer selection and food, and were excited to get the call from the McG’s that they were heading up there. They arrived at The Blue Door before we had left the house only to find that there was a huge wait and not even standing room in which to do the waiting. So, on to plan B which was to go to Groveland Tap. Another call came that the situation was the same there!

Plan C…Muddy Pig. By this time we were leaving the house but keeping the phone handy just in case. It turned out that although there were people at the Muddy Pig it wasn’t being mobbed and in fact there were booths open. So as far as I can tell, there might be a recession going on in the larger world but apparently not here amongst the craft beer crowd. Who would have thought that on a Wednesday night not one, but TWO places would be so packed?

I’m still looking forward to checking out The Blue Door at some point but our trip to the Muddy Pig didn’t disappoint. Seeing Furthermore’s Fallen Apple on their menu I knew I had to give that a try. It’s not a cider and not really a beer either, but some combination of the two that works. I’m thrilled that I continue to be impressed with each new brew I try of theirs.

There seemed to be quite a few hoppy beers and many above 8%, of which a good share made it to our table. My contribution to the hoppy beers was Two Sisters Double IPA from Left Hand. Hoppy, yes, high in alcohol, yes and yummy! However I think my favorite of the night would have to be Kasteel Rouge. This one is so good it just might knock the Duchess off her pedestal. I’m not sure who else carries it but I know I’ll be looking for it from here on out.
Posted by Mag at 5:53 AM No comments:

I came across this story today at cnn.com talking about drinking's effect on brain size. Overall, the story doesn't say a whole lot, but one thing it does confirm is a suspicion I've had about booze shriveling up women's brains. "In women, even moderate drinkers had a smaller brain volume than abstainers or former drinkers." Whereas, with men, this was only noted in heavy drinkers. This seems like enough of a compelling reason to require sober-cab duty from the women in our lives with more frequency. Also, it's proably prudent to split all six packs with four bottles to the men and two to the women so as to prevent any shrinkage imbalances. Sorry ladies, but it's science!
Posted by Mag at 4:34 PM 2 comments:

It doesn't take much of an excuse

Last night we decided to use the excuse of the new floor installation as a reason to go out for dinner. After quite a few rounds of, “I don’t care, wherever you want to go,” we settled on Buster's since the last time I was there was for Schell’s Dampfbier release and Mag’s last time was even earlier than that.

When we got there the place was pretty full and the wait staff pretty slow to seat us but we were able to get a table. Perusing the beer menu, knowing with the way things were going I’d better be ready with my drink order as soon as she came back, Surly’s Coffee Bender popped out at me, then Tyranena’s Hop Wh0re but what really drew me in was Rogue’s Anniversary Ale. I’ve had quite a few Rogue products and to be sure I can’t list them all but this was one, looking at the name, I was pretty sure I hadn’t had and after tasting it, I’m more sure I haven’t had it before.

I was hoping to pull the description off of Buster’s menu, but the one they have posted on line is not up to date, because for once I thought the description was right on the money. Suffice it to say this is a tasty one, overall very balanced and full of flavor. Since it’s not listed on the Rogue website I wonder if it isn’t part of their Locker Stock series or some type of limited release. Either way if I can get some more of it before it’s gone I sure will.
Posted by Mag at 11:12 AM No comments: