If you've not yet had a chance to be inspired by visiting a craft brewery, if you've not had a chance to hear one of the many great stories that seems part and parcel to almost every brewery, or if you've not found yourself on brewery burnout after spending too much time drinking too many beers at too many breweries in too short a time, then American Beer is a must-see movie for you. And if you have experienced these things, well, then it's still a must see.

The movie is a documentary of a couple of friends who visit almost 40 breweries over 40 days, which is no easy feat. There are many breweries that never get any notable mention in the movie, which is a bit disappointing, but I don't think anyone can deny that the handful that get most of the air time are more than worthy.

I'm a bit ashamed to admit it, and I certainly don't mean any offense, but I was very surprised at seeing Larry Bell in the flick. In my mind's-eye Larry Bell was a 7 foot tall, bearded, bear-of-a-man who probably slept with my mom and is on the lam from the coppers. Turns out he's a...well, rather dorkish, normal looking dude. I wasn't disappointed by this. Just surprised. And encouraged. Hell, I'm a dorkish, normal looking dude who doesn't have any real redeeming qualities. Maybe he did sleep with my mom after all and I'm just his progeny???
Posted by Mag at 6:31 PM 1 comment:

We've Upped Our Standards, So Up Yours!

Yeah, I stole that from the Tortuga Twins, but whatever.

Due to demands for higher standards from the vocal readership, forthwith there shan't be further mention of the offensive widgets, nitro balls, or any other mundane gadgetry or chicanery. Alas, that bridge has been crossed once and we do not need to cross it again. So what, praytell, you may ask, will the newer, higher standards of posting for our musings be? Well, how about amusing graffiti, for starters?

Kris and I decided to head over to the Muddy Pig tonight for a bit of grub and a bit of beer. I've got to say, once again, that place is very quickly securing itself as one of my favs. Even when that place is packed to the gills, the service still seems to be on top of stuff. And you can't beat the beer selection. I had tonight, for the first time, a Rogue Mogul. Damn that was a fine beer. I was both surprised and impressed. This 7% ABV pale (or was it IPA?) is made with 5 different malts and 7 different hops. It looked like a nut brown ale, it was so dark, and it didn't have much aroma, but damn it was a fine tasting beer. Kris had Rush River's Winter Warmer which, I guess, is a Scotch ale. It smelled faintly of brown sugar and was well balanced and sweet to taste. Very good beer as well.

Anyway, after enjoying a few beers and musing about the aforementioned need to elevate our literary standards, I found myself swaying a bit and bemusedly reading the grafitti at the men's urinal. What first caught my attention was the on-going argument about graffiti. It went something like this, "This is grafetti. That's not how you spell graffeti asshole. Dumbshit, you've got grafiti spelled wrong." I paraphrased, but you get the gist. Priceless. Then I noticed some comments that were, at first, amusing and then disturbing because they seemed out of place in a men's restroom. The first was, "A hard man is good to find." The second was, "It's not pretty being easy." Man, if I could only enlist the cheery, witty souls that penned those words! That'd take this damn blog to whole new levels of quality. Alas, we'll have to simply rely on the inspiration those words provide for now.

Now the question is, what restroom should I seek out next for inspiration (in the most non-Craigian fashion)?
Posted by Mag at 10:21 PM 2 comments:

After receiving some grief last night about the length of time between postings here I decided I’d better come up with something for our loyal readers. That being said I can’t promise a work of art but I’ll try to make it better than the widget article.

Last night we headed up to the Blue Nile to partake in Surly’s release of Two. It was unfortunate that the new location of the Acadia Café wasn’t able to host this event but I’m sure all who attended last night were grateful to Al or whoever over at Blue Nile made the decision to offer up their location for the release. We were just barely in the door when we ran into the first of our many beer friends that had shown up for the festivities. It seemed like nearly every one was there so surrounded by good company, we got our fill of Two, cask Furious and the new Mild. All three were tasty brews but my vote for the best of the three would have to go to the cask Furious. Two is good but wasn’t quite up to the high standards set by One in my book. That doesn’t mean though I won’t try to get my lips on a good deal more before it’s gone and I’m looking forward to having a nice long session of Mild at some point. Maybe we’ll all get lucky and this will be the next brew canned and stocked at my nearby Cellar’s. Even with the crowd at the bar and the resulting longer than usual wait for beer it was a very pleasant night of drinking. Hope the rest of you that were there enjoyed it as well and those of you that weren’t…you should have been!
Posted by Mag at 3:38 PM 3 comments: 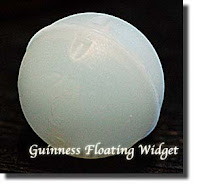 God I love those little plastic balls they put in cans of Beamish and Guinness that release carbonation into the drink! Incidentally, the can of Beamish I'm drinking calls it a "floating widget." I guess that's a technical term. When you open a can, the change in pressure causes the carbonation to come spewing out of the floating widget. I love the noise those things make. It sounds like the distant chirping of a bird...or more appropriately, it sounds like the chirping a panicking bird would make if you held it's head just below water level in a bird bath. Hmm, now I don't enjoy it quite so much.

Enough about nitro balls...
Jeez have we got a lot of stout to drink around the house. Now, don't get me wrong. I enjoy stouts. But I also enjoy other styles. We've got so many dang stouts lurking about, I don't think we have any room for other beers. I guess that's a good problem to have, huh? If I'd get off my ass and drink a few and stop bitching about it I could solve my own problem.
Due to some principles that got in the way of a good time, Kris and I aren't going to Winterfest this year. I just didn't enjoy it all that much last year. I don't know what exactly it was, but the location didn't do much for me and I thought there was too much emphasis on food and music. I hope I don't regret it. If we can get a few friends together to go bar hopping, then I don't think I will. The current hope is that we can rent a limo or bus to haul our drunk butts around. None of us are ambitious (or stupid) enough to even ask if the Pedal Pub is available. Maybe this summer... 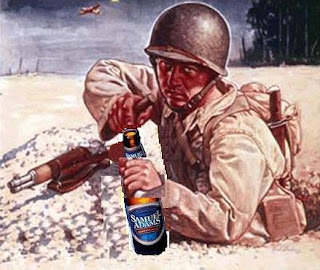 Can you guess what we did to ring in the New Year? Did someone guess “drink”? Yep, that’s right. Besides, what’s New Year’s Eve other than a good excuse to have one last holiday hurrah before the doldrums of winter and a lack of holidays (days off work) sink in? After stocking the house with more beer than we could possibly consume, some of our friends and fellow drinkers came over to start the New Year off right with some excellent stouts, porters and a few other great local brews. Although we ended up with plenty of leftovers that will bring us pleasure another day, the growlers from Barley John’s, Great Waters and Town Hall proved to be quite popular and there wasn’t a drop to be had by the end of the night. Thanks to everyone that joined us! Happy New Year!
Posted by Mag at 6:38 PM No comments: