If you can't say anything nice, find something else to drink

I don’t expect it will come as a surprise to anyone that I don’t have any great, “look what I found!” beer stories to relay from the trip to Iowa. In fact, the only Iowa brew I picked up, well a sampler pack from an Iowa brewery to be specific, falls into the if-you-can’t-say-anything-nice-don’t-say-anything-at-all category.

So instead of regaling you with Iowa beer tales, I decided to crack open the two 21st Amendment brews that showed up on my doorstep. Hell or High Watermelon Wheat and Brew Free or Die IPA are two of the most easily found brews of theirs around here, but neither of which I had tried before. 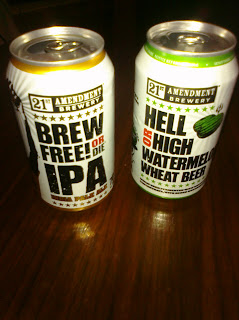 Hell or High is a low ABV beer, weighing in at only 4.9%. The slight fruity aroma and flavor aren’t distinctive enough for me to identify as watermelon but neither do they come off as artificial. Wheat beers aren’t my thing in general and there’s certainly nothing offensive about this brew however I’d issue that warning that if you order one, don’t let it sit around too long. Drink it and be done with it as I found it to be less palatable as it warmed.

Brew Free or Die IPA lays claim to 70 IBUs and 7% ABV. The strong hop aroma leads one to believe this IPA has considerable potential but surprisingly it was booziness, rather than hoppiness that jumped out at me upon drinking it. That’s not to say this isn’t a good beer, simply that from my point of view, there’s more hop aroma than hop flavor.

Taking all four 21st Amendment brews I’ve had into account, I have to say I’m looking forward to seeing more of their product. It’s a toss up between the Monk’s Blood (from the taps at the Muddy Pig) and Black in Back IPA (from the taps at Triple Rock) as to which I prefer, mostly due to having them weeks apart. Were I to have them in succession I’m guessing one would stand out as my favorite. And the IPA and Wheat, while not at the top of my list aren’t bad. There are few breweries that I can say I love their entire line up so with the 50/50 score so far, 21st Amendment is a good addition to the other brews we can get here in Minnesota.
Posted by Mag at 5:32 PM 2 comments: 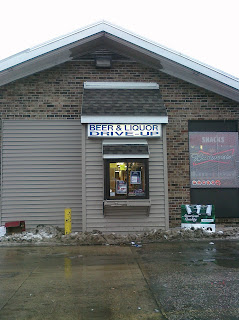 Even though I know that I wouldn't want to buy, much less drink, anything they're selling I must admit there's still a little part of me that wants to do it, just for the novelty of it.
Posted by Mag at 12:58 PM 1 comment:

To Take, or Not to Take?

We’re supposed to be in Iowa for Christmas this year and although the weather is conspiring against us I think we’ll make it. It’s always a tight fit when Cleo’s coming along so I need to stick to the necessities. But when leaving our well stocked beer fridge, and nearby back-up, Cellar’s, where’s the line between necessity and indulgence?

Granted, in Iowa you can pick up beer at any gas station or grocery store and they have come a long way since I moved north, but even with their more liberal laws (including buying on Sundays), they still have a long way to go to catch up to Minnesota in quality. So what makes me look like more of a lush – arriving with a car loaded down with tasty brews or leaving for the liquor store half an hour after arriving in town?

Of course, even if I arrive well stocked, I’m still going to have to make an exploratory trip to the Hy-Vee Liquor Store up the road just to see what they’re carrying these days. And if by chance they have any new brews from the Iowa breweries I’m familiar with or anything we can’t get in Minnesota you know I’m not going to be able to resist picking them up. Besides, even if the weather cooperates and allows us to make it back to Minnesota on Sunday, that’s a good 3 – 4 days of family time.

Maybe a compromise is in order. No growlers, a few bombers (to give the illusion that we’re all drinking, not just me) and an effort to drink down some of our more heavily stocked favorites. That seems reasonable, right?
Posted by Mag at 10:36 AM No comments:

An unusual situation has been in play regarding a new beer on the market – Fulton’s Sweet Child of Vine. It’s been available for weeks, possibly months, and until last night I hadn’t had it. Now I must say that I hadn’t really been seeking it out but on the other hand I was looking for an opportunity to try it.

Previously the closest I had come was at Stub & Herb’s. The last time I was there I only had time for a single pint and as I was a couple of delicious sips into it I noticed the bartender changing out a tap handle, replacing it with a Fulton one. Dang! If I’d only gotten there 10 mintues later I could have had it. Ah well, I figured, my first taste of Fulton just wasn’t in the cards that day.

Last night, arriving at the Edina Grill early for the Lift Bridge event, I spied the Fulton tap handle (good thing since it wasn’t listed on the menu). Excited to finally be able to try it, but tempering my excitement with the mixed bag of reviews I had heard, I was prepared to be underwhelmed. My verdict? This is a really good beer!

Now don’t go and think that after a single pint I’ve drank the Fulton Kool-Aid. As much as I enjoyed it, I’ll be interested to see if I enjoy my next pint as much as the first. Plus, they are still newbies and my overall impression won’t be complete until I have another brew or two from them. And I’d like to meet the guys as well so hopefully the next time they’re making the rounds I won’t be as busy as I was when the Child came out. But they’re off to a good start in my book.
Posted by Mag at 5:46 AM 2 comments:

Email ThisBlogThis!Share to TwitterShare to FacebookShare to Pinterest
Labels: Fulton

Last night, upon stopping by and chatting with my favorite bartender, I learned that at least some vegans apply their beliefs not only to their food but also to their BEER.

My first question, and maybe yours, too, is how is beer NOT vegan? I’ve yet to run across a beer brewed with bacon (but just think of the possibilities!!) and although if brett is used in the brewing you may get a cheese smell, there isn’t actually cheese in it.

The answer apparently has to do with the filtering process. Isinglass is commonly used to filter beer and like many things in this world, the name doesn’t give a hint as to what it is actually made of. So here it is: the dried swim bladders of fish. According to Wikipedia, it was originally made exclusively from sturgeon, but later on the process was refined so that cod could be used as a much cheaper substitute.