Such a simple idea, yet this is the first beer and food pairing I’ve seen that pushes aside the idea that beer pairings are a dinner event. In its place was an event perfect for a Sunday.
Saraveza, a kick ass ‘Sconie bar in NE Portland, has always left me looking forward to my next visi. This time was no different, except for the fact that breakfast foods usually don’t grace their menu, which by the way, after seeing what their kitchen (Chef Dustin Gettmann in particular) can do, they should at least offer breakfast dishes as specials from time to time.
Billed as “Saraveza’s MateVeza Beerunch” the four course affair included two brews by MateVeza, along with offerings from Cascade Barrel House and Du Pont. 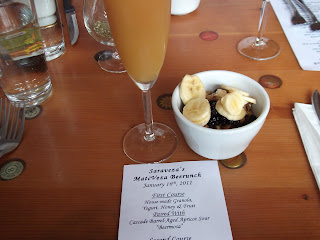 First Course: House-made granola, yogurt, honey & fruit paired with a Cascade Barrel-Aged Apricot Sour “Beermosa”
Both the food and the beermosa were a great, light, sweet way to start off. Not generally a fan of any type of beer cocktail, this one makes me reconsider the idea of mixing my beer with something. The sourness in the beermosa was gently tempered by the food and upped the anticipation for the courses to follow. 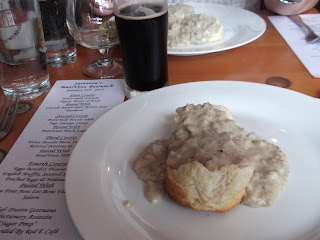 Second Course: Buttermilk biscuit with sage sausage gravy paired with MateVeza Black Lager
Biscuits and gravy can be amazing or you can be amazed at how much they suck. These were the former and although the smaller portion size was appropriate for the multi-course meal, I would have been hard pressed not to consume a much larger portion. In fact, I was hard pressed not to pick my plate up and lick it. And once again, the beer was perfectly paired. Lagers aren’t usually my thing but this black version goes into the category of the few I would seek out. 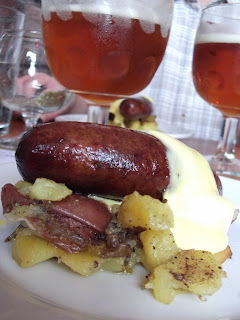 Third Course: House boudin blanc sausage, roasted potatoes and aioli paired with MateVeza IPA
At a ‘Sconie bar you would expect good sausage. This wasn’t just good, it was great! The smoky flavor and firm texture showed off the kitchen’s sausage making talents and the perfectly crispy skin affirmed they also know how to cook sausage. And the potatoes, oh these weren’t just any old potatoes, these were cooked in duck fat and drizzled with a saffron aioli. While I didn’t enjoy the MateVeza IPA as much after I’d finished my plate, as part of a pairing, it held up its end of the bargain. 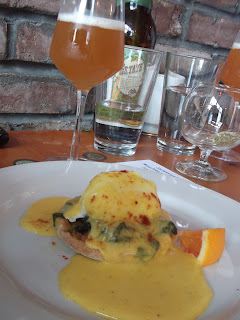 Fourth Course: Eggs Benedict Florentine – English muffin, sautéed spinach, poached eggs and hollandaise paired with Du Pont Avec Les Bons Voeux Saison
This was the course I was most skeptical about in light of my long standing avoidance of hollandaise and my general dislike of saisons. It turns out I like hollandaise, or at least Saraveza’s hollandaise. Unfortunately I wasn’t getting on board with the saison and overall this was the weakest course in terms of how well the food and beer were paired. That being said, I’d probably walk over broken glass for the first three courses so “weak” is all relative.
Finally, after parting words from MateVeza brewer, Jim, and Saraveza owner, Sarah, the event came to a close. But even with stuffed bellies there was room for the last treat: a mini cupcake from the Sugar Pimp. I can only hope that Saraveza has more of these brunches in the future.
Posted by Kris at 1:19 PM 1 comment: