How many times has some well meaning person asked you what your favorite beer is? I’ve found it’s not usually one of my “beer geek” friends as they know just how difficult such a question is to answer. There are just too many out there to choose from, not to mention my evolving tastes, what time of year it is, what setting I drank a beer in or any number of other variables.

This past weekend was chock full of good beer, consumed in the presence of great friends, but there were some standouts worth mentioning, ones that if being tortured (like watching the last keg of Ommegang Rouge on earth being broken and spilling into the sand, not leaving behind even the smallest puddle for me to lap up) and forced to submit an answer to the favorite beers question, would rise to the surface.

So Ommegang Rouge aside, since I didn’t make it over to see Al, here is my top 3 for the weekend.
#1 – Friday night’s outing to The Muddy Pig’s Festival of Hops was a great way to start off the weekend. The flight option was great for this kind of event and gave me the chance to try some beers I would likely never order as a pint/goblet. One of those being New Holland’s Existential Hopwine. This is one boozy beer, but in the middle of winter when sippers are king, this one takes the crown.

#2 – Saturday night, Kat’s final birthday celebration for the year, offered a multitude of delicious treats. But the best, the most unexpected, was Surly’s 16 Grit. If you’re wondering how you missed the release of this in cans, don’t worry, it’s not out yet. This gem, lovingly preserved and shared by Jason, came in fact in growler form. And you know what? For a beer that hasn’t been available like that for over a year, drinking it, you would have guessed it was filled yesterday. Makes me all the more excited for those cans to roll off the line!

#3 – Like many a Minnesotan, Sunday night meant watching what ended up being a sad end to the Vikings season. All was not lost however; at least there was good beer to be had. The best of the bunch, and truly surprising to me, came from Sprecher. In general I’m not a fan of their products. They aren’t bad, just not usually to my liking. So when Mag popped the top off of their Bourbon Barrel Dopple Bock, I wasn’t expecting much. How wrong I was! This is another in the sipper beer category and you’ll have to enjoy some bourbon flavor in your beer to agree with me here, but I can tell you that on my next run across the border if I see any of it, it will be mine.

So as the new week begins, I hope you, too, have some fond memories of the weekend.
Posted by Mag at 8:14 AM 2 comments:

Last night, Kris and I and some friends caught our first North Star Roller Girls bout. We've had a chance to catch the Minnesota RollerGirls in action a few times as well, and it was pretty interesting to compare the two. I thoroughly enjoy the matches, more so than many other professional sports events I've been to in recent years.
Some thoughts...
One of MRG's sponsors is Pabst, which I think is a savvy move on behalf of Pabst. Frankly, I think any of the local/regional breweries could benefit from a partnership or sponsorship with either league. Given that Pabst is already sponsoring MRG, I doubt there would be an opportunity for a second brewery to step up there. I actually think having Schells sponsor the NSRG would be a great fit. It would give them a chance to feature Grain Belt and their craft offering to a beer-friendly crowd.
Changing gears...
I think, deep down inside, if not openly on the surface, everyone wants a roller girl name. One of the most appealing aspects about the sport is the persona that each player and team adopts that borders on risque. I've thought about this for a few years and think that Cannonball Buns would be a good fit. Of course, I can't really use it until I 1) learn to skate, 2) lop off my bidness and 3) verify that name isn't taken yet. I guess I should verify the availability first, before I take action on step 2.
If you haven't been to a bout yet, I strongly suggest look into this. It is easier to get tickets and a good seat for NSRG, but Roy Wilkins, the MRG venue, is a better venue for a rowdy match than NSRG's Mpls Convention Center.
Posted by Mag at 10:32 AM 2 comments:

Kris and I had a chance to attend a get-together of folks from around the metro that blog/write about beer. The event, the 1st Annual Twin Cities Beer Blogger Summit, was hosted by Stub & Herbs and they did a fantastic job in making us feel welcome. Here's a link Stuart's photo of the event (and no, I don't believe my wife is fondling...no...wait...yeah, she is...). I've come away from the event with a few observations, ideas, etc. after sharing a few beers and words with this fine group of folks.
Anyway, looks like I've got a bit of work to do in updating our blog with links, events, etc. I didn't get a chance to chat with all the folks at the Summit, but I guess I'll rectify that next time. Thanks to Stuart for leading the charge on this event. I think we need to drop "Annual" from the name of this event and replace it with something like "Quarterly."
Posted by Mag at 5:27 AM No comments:

Last night, inspired by information from Eric that a great, new tap line up was in place, the McG’s and McD’s headed out to check out Cherokee Tavern in West St. Paul. Arriving around 5:30 pm, the place was pretty quiet and we bellied up to the bar for the first round. We found that the staff’s knowledge of the beers was limited but our bartender was friendly and happy to offer samples of anything they had on tap. And isn’t this a beautiful tap selection? 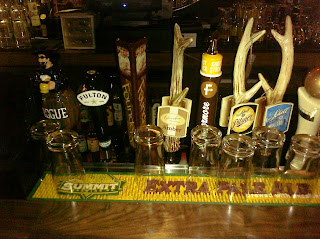 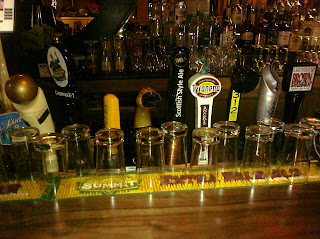 I started off with one of my new favorites, Tyranena’s Rocky’s Revenge, and we soon moved over to a table, being seated by owner/manager Jim Casper. He was happy to chat about the new tap lines and seemed at least willing to consider my plug to update a few of the taps at their Eagan location. I’m not betting on it, but it’s nice to dream that there could be a bar within blocks of our place in the suburbs that served good beer. Ok, head out of the clouds, back to the evening at hand.

Our server was friendly and made sure to get our appetizer order and round of drinks in before the end of happy hour (apps being ½ off). That being said, the arrival of both our drinks (for the entire time we were seated at the table) and our food was incredibly slow. I don’t recall exactly how long it took for the liquid portion to arrive but it took at least ½ hour for the food to arrive. In our server’s defense, she appeared to also have tables in both rooms of the dining room and it’s conceivable that the kitchen was short staffed as the dining room did fill up much more than I would have anticipated for a Monday night.

The buffalo wings were the best of the bunch (accompanied by ample blue cheese), with the onion rings being lightly battered but in desperate need of salt, the pepperoni flatbread lacking the crispness flatbreads generally boast and the 5-step parmesan fries being your run of the mill fries with the addition of some parmesan on the top of the pile. But, hey, we were there for the beer, not the food. So once the food was gone, we vacated the table and made our way back to the bar for additional pints, including Furthermore’s Knot Stock that had the most pronounced pepper flavor I’ve ever gotten out of it. Yum!

Overall, it was a hit. It’s relatively close to home, the tap selection is darn good for this neck of the woods and their happy hour pricing is a big plus. While appetizers don’t appear to be their strong suit, they had some pretty tasty looking sammiches on the menu that I’ll have to investigate further on the next visit.

In lieu of having something interesting to write about, I thought I’d do a little, “na-nah, na-nah, a boo-boo, looky what I got,” instead. So here’s a look at the goodies that were carefully selected and gently transported over the border from our fair neighbor, Wisconsin. 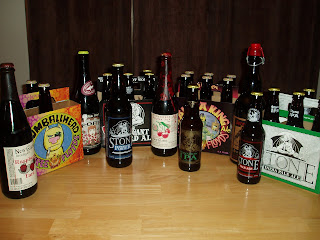 So you don’t get the idea that we just take and not give, rest assured Wisconsin was happy to add some portion of our roughly $185 purchase to their tax revenue.
Posted by Mag at 6:30 PM 2 comments: