I don’t know how to pronounce it, it’s not a style I’d expect to come out of Surly and it’s a beer I expected not to like. Don’t let that fool you into thinking that I wasn’t going to try it out if I had the chance though.

About a week ago I heard that Café 28 had tapped a keg of it and then yesterday afternoon I found out that it was going on tap at Senor Wong’s. With that knowledge, our initial evening plans of heading to Great Waters for dinner and drinks got derailed. And after some major downtown detours due to all the wonderful road construction we finally arrived, got a parking space right out front, and bellied up to the bar.

When we inquired about the Schadenfreude we found out it wasn’t on tap yet and might not be tapped until around 7:00. Slightly disappointed, but able to find other liquid refreshments to tide us over, we ordered the first round. It didn’t take our attentive bartender long to get the full scoop and before we were even halfway through our pints, the Schadenfreude was ready.

Wary of the style (oak-aged German dunkel lager), I left it up to Mag to order it first and try his. On first taste I was quite surprised at the overall mildness of the beer, nothing too lager-y, nothing too dunkel-ish about it at all. In fact, once I’d finished my beer I ordered my own pint, and more after that. 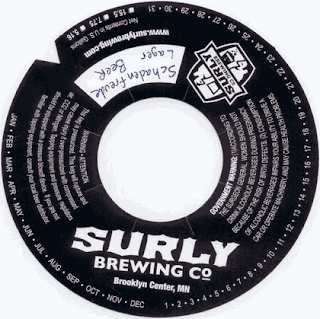 Tonight I went up to my Old Chicago in Eagan to partake in the Summit cask they were to have. I’d heard it would be a cask of Extra Pale Ale, and while the offering didn’t completely excite me, I was excited that Summit had made the effort to bring a cask to my part of suburbia. Besides, Summit EPA is one of my go-to beers, yet one I’d never had on cask. So up the road I went, and low and behold, the cask was in fact Horizon Red Ale. A very happy turn of fates indeed! 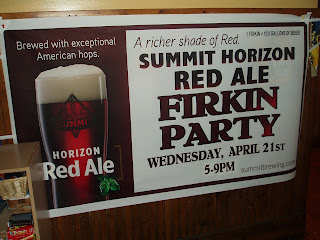 The bartender kindly, after I had ordered my pint of the cask, also poured me a sample of “regular” Horizon Red for comparison. Having the two side by side made me a bit sad. Sad in the sense that the cask version was so good and this might be my only time, ever, to have it. But the sadness passed and was replaced by the joy of the here and now, the fine pint of cask Horizon Red Ale in front of me.
Posted by Mag at 5:50 PM No comments:

Email ThisBlogThis!Share to TwitterShare to FacebookShare to Pinterest
Labels: Summit

It occurred to me this morning that every day of this past weekend I was enjoying great beer out on one patio or another.

Friday night it was Great Waters, where I got to try out their new Opening Day IPA which rivals another recent addition, Glacier Pale Ale. Both have great hop flavor and at about 5% each make for pretty good session beers.

Saturday afternoon, no surprise, it was Town Hall. But what was a surprise was seeing Festivus back on tap! That’s right, someone must have stashed a keg of Festivus for the rest of us in a corner somewhere and forgotten about it. Not that I’m complaining, I’ll happily drink this more wintery brew while those around me are delighting in a hefe or some other warm weather beer.

Sunday was even nicer than Saturday and this time the patio of choice was Stub & Herb’s. Very quiet when we arrived in the early afternoon, we took advantage of the sun, warmth, great tap list, and happy hour pricing. The beer went down easy, including one I ordered but didn’t think I’d like very much, Great Divide Hoss Rye Lager.

Hopefully you found the time to do some patio drinking yourself. Gotta take advantage of it when you can. You know, before it decides to rain for days on end, sky rocket into the 90’s or remind us exactly where we live with one last taste of white flakes.
Posted by Mag at 1:08 PM No comments:

A love of ethnic food and a love of craft beer can often be two loves that are hard to bring together. Take your favorite Mexican restaurant. They probably have a liquor license, but you’re also probably relegated to a selection consisting of Mexican beers and macro beers. What about your favorite Chinese or Vietnamese restaurant? Mine can be hit or miss with a liquor license at all and the beer selection is generally wanting, Ngon being a HUGE exception to that rule. Heck, even two of my favorite BBQ joints don’t sell beer.

So that leaves one to make the decision between good beer and good food. Most of the time that’s a tough decision and one that might be decided by the proximity of the provider of one love to the provider of the other love. In all honesty, though, I’m usually willing to compromise on the food if the beer selection is good enough.

But the two loves can coexist at a couple of places in St. Paul. Places that put their energy into making great food. Places that aren’t interested in raping their customers with corkage charges rivaling the actual cost of the beverage. Places that are quite comfortable with patrons bringing in their own beer and wine to enjoy with their meal.

One of those places is Babani’s Kurdish Restaurant (the first Kurdish restaurant to open in the U.S.). Babani’s resides just a few blocks away from Great Waters so in theory, one could get some great Kurdish food and some great craft beer all in one evening. And that would be ok, but being able to select your own beers and bring them in to have right alongside the great Kurdish food, well, that is downright excellent!

Saturday night before catching the final bout of the North Star Roller Girls at Roy Wilkins, the eight of us stopped at Babani’s. A few of us had been there before and had enjoyed the cuisine immensely. The others were Kurdish virgins but trusted us enough not to steer them wrong. Previously we hadn’t been aware of the ability to BYOB, but thanks to a commenter on the Heavy Table post about the dowjic (which by the way is AMAZING), we were clued in this time.

As can be expected with this group, we brought way more than we needed but one never knows just how thirsty one might become during the course of a meal. We had a great selection of beers to choose from and the restaurant was happy to let us imbibe, even when the cork from a bottle of highly carbonated beer exited from the bottle with such force that it managed to hit the vaulted ceiling. They didn’t have to be troubled with maintaining an inventory of beer and we didn’t have to be troubled with a selection that was sub-par. A win-win all around.
Posted by Mag at 6:43 PM No comments: