The missus and I had a chance to attend the Between the Bluffs Beer, Wine and Cheese Festival in La Crosse with the McGs and some other friends. I gotta be honest, I can't say anything about the wine and little about the cheese as I didn't take the time to enjoy either. Beer was at center stage for us at this event and for most of the attendees, I think. Here are some observations from the weekend:

Email ThisBlogThis!Share to TwitterShare to FacebookShare to Pinterest
Labels: Between the Bluffs, Furthermore, Lift Bridge, Schell's 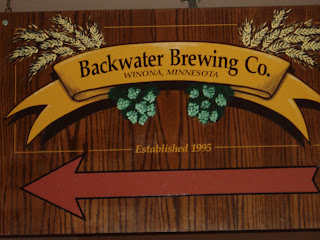 The other three offerings all had that similar combination of some expected characteristics for their style as well as some unexpected ones. Certainly none were undrinkable and should I be in that neck of the woods again, I’d stop by for a couple of pints with the grub that, although was typical of bar style food, was tasty and very reasonably priced.
Posted by Mag at 2:22 PM 1 comment: 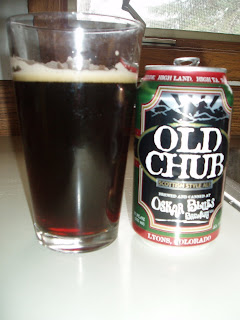 I don’t know and I don’t care. All I know is this kilt wearer knocked ‘em off.

Those of us blessed to be able to find Surly know that, nowadays, beer in a can doesn’t mean when you pop the top you’ll be opening up a can of crap. There are only a handful of others going the way of the can and honestly, that’s too bad. Cans prevent any damage caused by light making its way into a bottle and every once and a while you just might find yourself going somewhere that doesn’t allow glass. Especially with summer just around the corner. So if you’re going to one of those places you need to think about picking up some Oskar Blues.

Old Chub, brewed by Oskar Blues Brewery in Lyons, Colorado, is a Scottish style ale. Beautiful dark brunette, Old Chub is smooth enough to be easy drinking but busty enough to satisfy at 8% ABV. Available just across the border, Oskar Blues also make a fine Pale Ale by the name of Dale, his big brother is Gordon, is a nice hybrid strong ale and I’m inclined to believe the rumors that the heftiest of the clan, Ten Fidy Imperial Stout, will be as amazing as I have been led to believe.
Posted by Mag at 4:10 PM 1 comment: 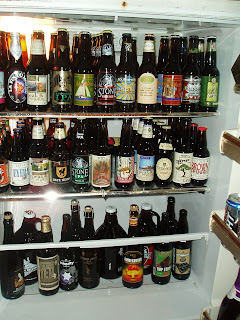 Today's gonna be a Good Friday, and I don't mean in the Christian sense. There will be no crucifixions (well, maybe in the Phillipines but not at my house), no scourging at any pillars, no crowning of thorns. I expect no...zero...nada interference from my Jewish neighbors. I'll walk over there shortly and inform them that if they want to throw stones at someone, they'd better not be throwing them at me.

Instead, Kris and I are taking half the day off to grill out, drink beer, and enjoy the day with friends. "But wait, Mag, you don't need to take off work half a day to drink beer!" Ahh, but yes I do. Kris and I are sitting on a bounty of fine beers from last weekend's foray into Wisconsin. We've got Stone, Oskar Blues, Dark Horse and even some Hitachino just asking to be drank (drinked? drunk?)...not to mention a bevy of many other bevvies.

Damn it's good being an upstanding, red-blooded, beer-drinking American!
Posted by Mag at 11:01 AM 6 comments:

Where are my beer bubbles?!

Damn it Scott, are you holding them hostage?
Posted by Mag at 7:50 AM 3 comments:

Stillwater: The New & The Old

The New: The Roman Market
The Old: Meister’s Bar & Grill
They both rock and you should visit them.

I have to give credit to the Lift Bridge guys, and their lovely wives, for giving me reasons to venture to Stillwater and discover little treasures such as these. Sure, you can find Lift Bridge brews throughout the Twin Cities, but it’s great to see so many establishments willing to put a truly hometown beer on their menus (either that or Lift Bridge is really the mob that secretly controls Stillwater.)

The Roman Market, our dinner stop before heading to Meister’s. This little gem has only been around a year or so but I’ve heard nothing but good things about them. On the way there, Scott was adamant that he was going to have a pizza. Once we got there and I took a look at the menu I would have had a hard time narrowing the choices if the idea of pizza hadn’t already entered my mind. While all of the combinations sounded great, I was very, very pleased with my choice of the Balsamico (candied figs, gorgonzola and proscuitto finished with an aged balsamic reduction, gourmet greens, and fig molasses). The Farm Girl went very well with it. Next time, the Vesuvio.

One note of caution: the parking spaces are extremely tight. You may want to consider finding a spot on the street or run the risk of coming back to your vehicle and finding you can’t open the door wide enough to get in. Or worse, that Kris is with you, can squeeze in to the driver’s side, but is really, really bad with a stick shift and only after killing the engine three times and beating up on the transmission is able to back the car up five feet.

After a great dinner we headed to Meister’s Bar & Grill, where Lift Bridge was tapping a cask of Farm Girl to accompany the Pale Ale already on tap. This place has been around for at least 60 years (according to the 60th anniversary shirts they had for sale). It’s a cozy neighborhood joint with semi-carpeted walls, light fixtures you could brain someone with and an 80+ year old waitress who I think is also the proprietor. We found the guys and their wives, enjoyed a few pitchers of Pale, a basket of surprisingly good mini tacos and samples of the specially made Pale Ale beef stew. I’m looking forward to going back for everything except for the unbelievably tight bathroom. You wouldn’t believe it if I tried to tell you about it. Instead, go yourself and enjoy!
Posted by Mag at 10:05 AM 1 comment: