Does John Henry have any brothers?

I first had Cold Spring’s John Henry 3 Lick Spiker Ale at Indulge in June. This was the first thing I’ve ever enjoyed that came out of Cold Spring and it’s been stuck in the back of my mind ever since. I guess in part because it is such a good brew and in part because I just can’t reconcile Cold Spring with a beer of this caliber.

Here we tend to go by the old rule everyone’s mom drilled into them: if you can’t say something nice, don’t say anything at all. So I don’t want this to come across as saying something not nice. Instead, I’d prefer to think of it as a bit of a challenge to the brewers at Cold Spring. With John Henry, you’ve proven that you can make an absolutely incredible beer. I challenge you to do it again…and again.

I enjoyed it in June, but now that the weather has most definitely turned, I’m enjoying it even more. At 9.1% ABV this is a sipper to be sure, one that fills the nose with aroma, coats the mouth with flavor and leaves a pleasant, lingering aftertaste until you lift the glass again and enjoy the next sip.
Posted by Mag at 5:49 PM 2 comments:

These Hops Are MINE, Not Yours!!!

Kris and I read a Strib story today, "Ethanol Industry Solves New Problem With An Old Remedy," that sent an uncomfortable shiver up our spines. The short-version is that ethanol producers have recently begun adding hops to their production processes to help cut back on bacteria in the saleable by-products. Great. So what are the implications?

I think the ethanol industry in the U.S., in its current form, is a sham. Corn-based ethanol production is not an efficient process (in terms of energy use) and the only way ethanol can compete from a price perspective is with major government subsidies. And besides, Americans like supporting American farmers, even if the support is illogical, non-competitive and a bad idea in the long-term. Government (or political) support is pork-barrel in nature and is driving dramatic spikes in demand that are mostly fabricated and not sustainable. So now, in classic American-agrarian fashion, too many producers will jump into the market, over-build plants, over-produce ethanol. This will drive prices for corn, and now hops, up and will cause short-term shortages and cause more volatility in the respective markets (oh yeah, it'll also cause producers of corn and hops to think, "Hey, we should produce more too!") .

Then, of course, the pendulum will swing the other way and no one will be able to make money at ethanol and a bunch of plants will shutter their doors, causing a precipitous drop in demand for corn and hops, thus causing prices to drop and for corn and hop producers to lose their shirts and go out of business. In the meantime, all this volatility will make it hard for brewers to get a hop supply (and possibly barley too, as we've already seen some impact of ethanol production causing farmers to shift their efforts towards corn and away from barley) at a consistent or predictable price. To further exacerbate this problem, a bunch of douche-bag finance guys will decide to make a living off the price/quantity volatility, causing further problems to the market with their speculative trading and margin-taking.

So, in short, this use of hops could have an impact on hop supply and demand (and thus prices) and could ultimately on the quality of the craft beer I drink (I've skipped a few linkages here). I guess that if I felt U.S. corn-based ethanol production were really a viable fuel additive (in terms of pollution, cost, sustainability, etc.), I could live with this. But what really chaps my butt is that we could see some major changes to the hop industry (many for the worse) in support of a industry whose benefits are suspect.

A few weeks back I picked up a bottle of Victory Wild Devil and it’s been patiently sitting in the beer fridge waiting to be uncorked. It almost happened a week ago, but we ended up going out for beers instead of staying in so it went from “on deck” (aka in the fridge in the house) back out to the beer fridge in the garage.

On Saturday at ABR I had a chance to try Victory Wild Devil on tap and I mentioned to the guy that I had been looking forward to the bottle I had of it at home. Quite surprisingly he told me it was much better in the bottle than in the keg. Seriously, this is the first time I’ve heard this. Usually it’s the other way around.

So after sleeping off ABR it was the first football Sunday of the year and we had plans to watch the game with some friends. As we were packing up beer I made sure the Wild Devil went along since the taste of the kegged version was relatively fresh in my mind.

Upon arrival, with Mag’s help, the Devil was uncorked. Highly carbonated, only about ¼ of a glass could be poured no matter how gently I tried to ease it down the side. Then the waiting began as the huge head slowly began to recede and I was able to get my first taste. And you know what? The guy from ABR was completely right. The brett was only faintly detectable in the keg but took a nice front row seat in the bottle. According to Victory’s website, they brew this year round so I’m looking forward to having more.
Posted by Mag at 5:56 PM No comments: 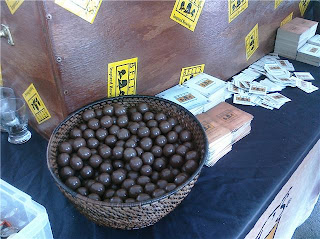 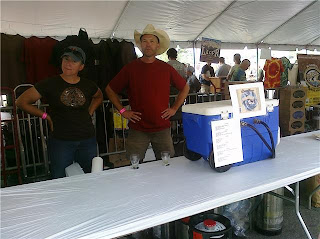 A (Long) Weekend in Beers

As you can see from my last post, my Labor Day weekend started off with a half day of work Friday and lunch over at the Blue Door. I've been even more of a fan of Founders since we visited them in Grand Rapids and their Red Rye was exactly what I was craving that afternoon so didn’t venture into some of the other great stuff they had on tap.

That night we headed over to the Blue Nile for Al’s Battle of the Belg, Part I. I freely admit that Belgians are not my beers of choice and had anyone, really anyone else been having this event I probably wouldn’t have gone. But Al always does such a great job with his special events for us beer geeks that I couldn’t not go.

Between Mag and I going the (3) 4-oz for $8 route we made it through nearly everything. This is where I am happy to report that I had a lot of great beers! This would be no news to anyone who enjoys Belgians but it was a revelation for me. I went into the evening with the same mindset that I do at beer festivals and that is, “well, I might as well try it now and if I don’t like it, no big deal but there are few chances to taste things I would avoid if I had to order a full pint of it.” My descriptions aren’t very good but my clear favorite of the night was Ommegang Rouge. Ommegang, you need to bottle this ambrosia!

Saturday I was mostly on my own as Mag was out at the Ren Fest doing judging for the homebrewers. I had intended to make it up to Town Hall for pint club but the day got away from me. In the end I did make it up there, but first made a return visit to the Blue Nile with Kat and Scott for, yep, you guessed it, more Rouge. While there wasn’t anything that really caught my eye at Town Hall I knew I couldn’t go wrong with more of their Traditional.

Sunday was the day we had picked to hit the Ren Fest this year and while you can’t expect super beers out there we were hoping for some Flat Earth. Turns out as they were pouring the first one we ordered the keg blew. After making the full rounds and determining none of the other stands had any either, I made do with Schell’s (Oktoberfest, Pale and Stout) as well as a couple glasses of mead. My long weekend was very much enjoyed, beerwise and otherwise…hope yours was, too!
Posted by Mag at 9:55 AM 2 comments: 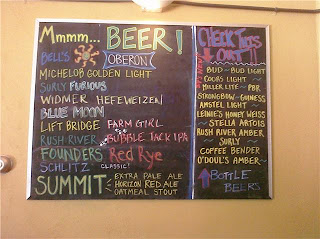 So many good beer choices but it was Founders Red Rye that won out today. 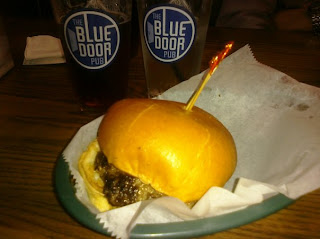 So many good burger choices but it was the Merriam Park that won out today.

And to top it all off, our dear waitress brought us a tasting of their newest menu item - Pie Bites. They look similar to Spam bites from the outside but are a wonderful, creamy, sweet battered and deep fried cheesecake ball served with sides of chocolate and strawberry for dipping. Mmmmm.....life is good today.
Posted by Mag at 12:42 PM 3 comments: