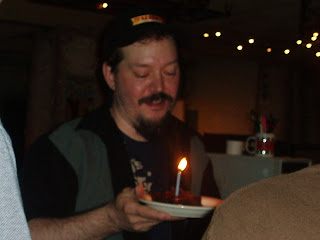 Where else do you go to celebrate someone else's birthday and they give you gifts? Like Darkness on tap. Or a firkin of tea bagged Furious with Amarillo hops. And there's a bag pipper playing "Happy Birthday." Damn cool!

Thanks, Al! You deserve a most excellent birthday.
Posted by Mag at 6:56 PM No comments:

Sunday’s St. Paul Summer Beer Fest capped off a month that has been chock full of beer events. Like last Saturday’s Indulge, this was the first go around for this festival. I’m pleased to say that other than two minor items they did a fantastic job. And it certainly didn’t hurt that it was an absolutely gorgeous day to be outside at a beer fest, especially after the HOT weather we’ve been slogging through.

I’ll go ahead and get the two minor stumbles out of the way first.
#1 Apparently someone forgot to tell the organizers that us beer geeks are rabid about quick entry into festivals so the best way to appease us is to send two person teams down the line. One does the requisite ID check while the other tears tickets and applies wrist bands. A simple fix.

#2 While it was good to have water stations with dump buckets out in the center of the festival area, it’s also a super duper idea to have pitchers of water at each table. It kind of makes for an annoying disturbance to have to head to the middle between each sample. Again, a simple fix.

Now that’s out of the way, on to the good parts, in no particular order. 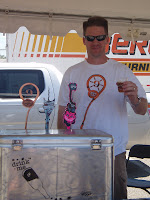 #1 Lots of places have good and/or easily recognizable tap handles. But then there’s a few that have really cool ones. Winner of “really cool ones” yesterday goes to Magic Hat. 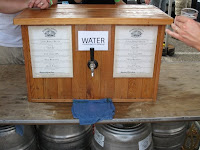 #2 As I mentioned above in the first #2, water is an important feature at a beer fest. And no one took better care of folks yesterday than Barley John’s. Check this out! (picture courtesy of Cal)

#3 Crispin, which I was introduced to at Indulge, had a competitor this week. While I think Crispin makes a better product, Original Sin has some excellent artwork. Too bad they were only selling posters and not shirts. Hint, hint guys!!

#4 After enjoying seeing Chris at every event Furthermore has put on or been a part of, at long last I got to meet Aran!

#5 On a similar note, it was good to see Trevor, newest member and formerly mystery Beer Ninja, of Lift Bridge.

Two notable missing participants were Cold Spring and Great Waters. I’ll own up to not being a particular fan of Cold Spring in the past, but after having had their absolutely outstanding John Henry last week I was hoping to see them again and have some more of that beer. I didn’t get the skinny on why Great Waters wasn’t there, but did get to see half the team as Joel was helping out the Town Hall folks. Isn’t it great when we can play together nicely?

Overall, it was a great time and I look forward to this being an annual event on my beer calendar. 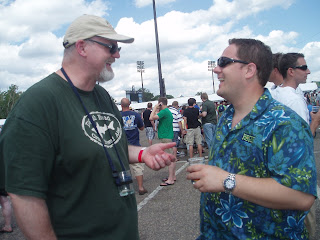 What a Beautiful Night 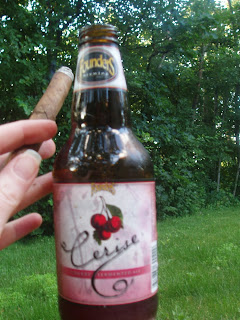 After a pretty warm day the evening turned out to be beautiful. Beautiful to sit outside, enjoy a well made fruit beer and a cigar.
Posted by Mag at 7:07 PM 2 comments: 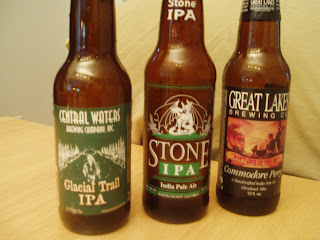 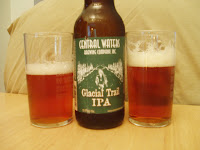 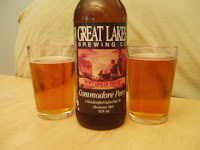 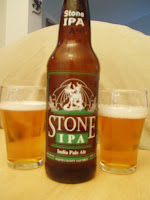 So what was the verdict, you ask. For me Central Waters was a bit too touchy-feely and Commodore Perry a little more sugary than I want in an IPA. I prefer to be roughed up a little bit when I’ve got an IPA in my hands and Stone delivered. Although this was a much more difficult tasting than with the coffee beers from last week, Mag agreed that Stone took top honors.
Posted by Mag at 6:46 PM 5 comments: 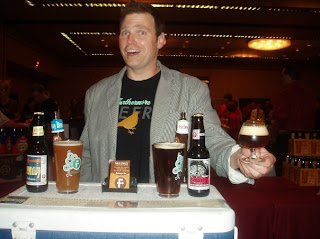 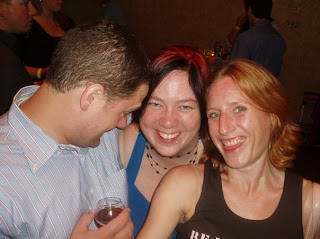 After being proud members of Town Hall’s Pint Club for about a year and a half, we just became members #4 and #5 of Great Waters’ version. Theirs is the MBA, Master of Beer Appreciation, and works a bit differently than Town Hall’s but I think equally as good.

Joining us in the top twenty were Lori & Paul (#1 & #2), Steve, Scott (who kindly also picked up memberships for Kat & JD) and Cal (he came a bit later so he didn’t get to be in the picture). 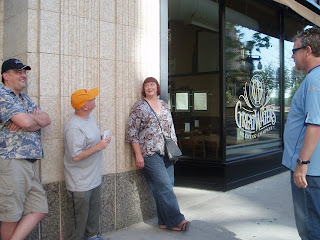 Now we have one more reason to slack off on the weekends, spending time at a pub drinking mighty fine beer, likely in the company of some mighty fine friends!
Posted by Mag at 9:44 AM No comments:

I love coffee. I really love coffee in my beer. And these days it seems like I have more choices than ever for coffee beers.

Not long ago most coffee beers were stouts or porters. These were big, thick beers suited for cold weather drinking and they were delicious. Now, though brewers seem to be branching out, experimenting by pairing coffee with other styles of beers, many of which are well suited for warmer weather. 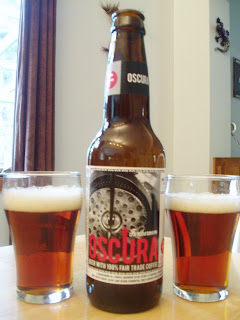 One of the locals, Furthermore’s Oscura, has just come back on the shelves and it prompted me to do a mini head to head taste testing of some of the readily available bottled or canned coffee beers.

Mag and I sat down tonight with Oscura, Surly’s Coffee Bender, Flat Earth’s Black Helicopter and out of Portland, Maine, Peak Organic Espresso Amber. On any given day I’d be happy to drink any of these but having not had any of them in the same sitting, it was time to taste test them against one another to really tease out what characteristics of each spoke to me. 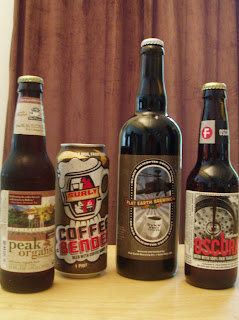 Both Coffee Bender (5.1% ABV) and Black Helicopter (5.2% ABV) were light on the tongue, finishing clean, with Black Helicopter having a bit more bitterness and smelling the most like a beer. 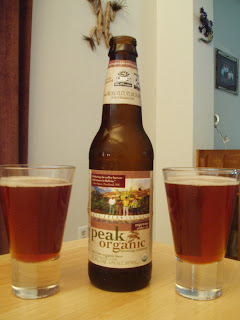 Espresso Amber (6.8% ABV) and Oscura (5.3% ABV) were surprisingly similar in light amber color with Espresso Amber having the strongest coffee aroma, like a cold espresso. They were more full bodied than Bender and Heli with Oscura taking the cake with its silky smooth mouthfeel, the result of the flaked maize.

From oatmeal brown to stout to amber to Mexican brown, these are all wonderfully made, easy drinking coffee beers. Tonight, however the Sconie beat out its Minnesota and East Coast competition.
Posted by Mag at 6:37 PM 3 comments:

That you would like to use to purchase my Beer Bank for me? No, not a loan. More like a generous gift. Anonymous donations welcomed.

In case you’re not an avid reader (and why not?) you might be slightly confused. To clear it up, check out my earlier dreams for this former bank that’s for sale.
Posted by Mag at 9:09 AM 1 comment: 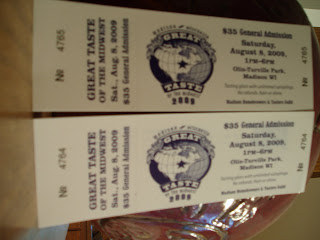 Praise be to the Beer Gods for once again shining their favor upon me. Glorious Beer Gods, in your honor I shall kill 10 bulls and sacrifice 2 virgins. Or, um...do a happy dance and then drink some really good beer.
Posted by Mag at 6:15 AM No comments: 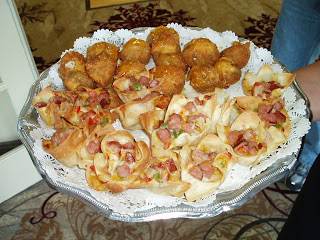 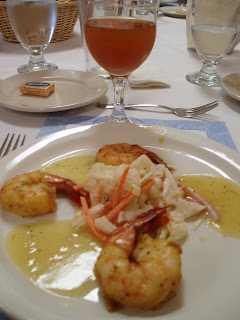 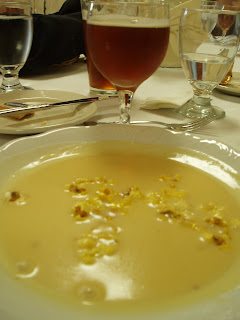 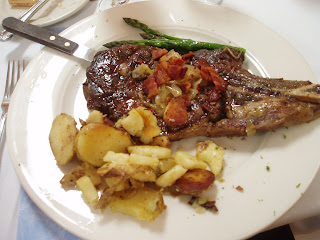 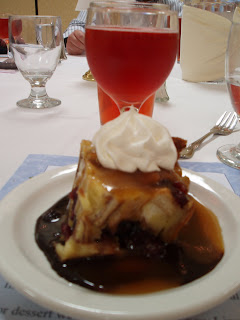 Just about the time we were finishing up with cigars we were invited back inside for dessert, an incredible cranberry chocolate bread pudding topped with caramel glaze, chocolate and fresh cream. This was paired with Minnesota Tan and it was a great way to end the meal.
Posted by Mag at 12:56 PM 3 comments: