I wish I had some great beer story to share with you tonight, but really all I have are a couple simple sentences. It's the last day of March, MARCH everyone, and I'm sitting outside on our deck, which is completely free of snow. The birds are chirping and the frogs in the nearby pond are going gangbusters with their song. I'm sans shoes (but in full disclosure I should mention, also a sweatshirt) and enjoying a fine, craft brewed beer.

My baby toe on the left foot is trying to convince me it's clear sailing from here on out but the rest of me knows this the the calm before the storm. The snowstorm which is sure to arrive before we're truly free of winter's hold. But in the meantime, soak it in. It's good for the soul.
Posted by Mag at 4:49 PM 2 comments: 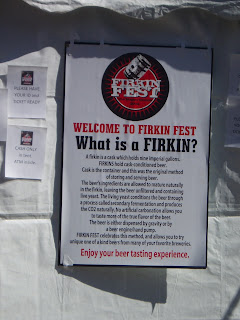 Favorite Beer #3 – My third favorite isn’t technically a beer, but a cider from Fox Barrel Cidery. Bonnie was not only tasty, and a redhead, but a sassy one, too. “Bonnie is the kind of girl who handcuffs you to the bed.” ‘Nuff said.
Posted by Mag at 10:25 AM 3 comments:

What’s not to like about a holiday where you’re expected to drink? It’s great when it falls on a weekend but when it falls during the week the other commitments in our lives come into play when deciding how to celebrate.

A couple years back I decided, after years of wanting to, that I was going to take the day off (or maybe it was just the afternoon). Anyway, it turned out to be not quite as fun as I’d hoped but still, the idea of taking a day off in the middle of the week to start drinking in the AM with some like-minded, jolly folks seems appealing.

I hadn’t given it much thought this year until I learned that in someone’s infinite wisdom where I work, it was decided that our annual two-day conference should take place March 17 & 18. I wonder, did it occur to ANYONE, that this might not be a great time to hold an event that requires the entire office to staff it? Oh sure, for our attendees, especially the ones from out of town, staying the night at a nearby hotel, they’re probably living it up. Hmmm…maybe first thing tomorrow morning we should take bets on how many totally hung over people show up.

But back to the celebrating, or lack there of in my case. Now I know I could go out after a long day of work, but honestly the evening crowd is not who I want to be out drinking with. Those folks will be drinking their fill of green beer and more power to them. Nope, I’m staying in. But in honor of this drinking holiday, I’ll be celebrating in my own little way…starting off with a very worthy brew, Hopslam. Hope you enjoyed the holiday to the best of your ability. And maybe next year we can start the day off with breakfast and a pint together.
Posted by Mag at 5:58 PM 1 comment:

I don't know what it is about The Happy Gnome that keeps drawing me back again and again, only to be disappointed again and again. It's a place I want to love and frequent often (Ouch, how's that for a horrible phrase?), but I seem to keep getting burned. I like the location, the building is fantastic and has a great atmosphere and the beer selection is solid. They have an active beer menu and interesting/frequent events. And yet these things are not enough to outweigh my disappointment.
I don't care for the menu. It's not for me. But that doesn't really bother me. The beers can be very pricey. But what the hell else am I gonna spend my money on? Clothes? Furniture? A manicure? Ha! Moot. The place can be very crowded. So what. These aren't the issue.
So what is it that turns me off about the joint? Its the staff and the service. Time after time, I and my friends seem to experience something negative about the staff or the service. If it isn't an arrogant bartender, then its an inattentive server. If you miss the bad attitude coming, you'll get the wrong order going. And if you're lucky enough to have an issue-free evening, you can always get your fill of negativity by having your neighbor at the bar tell you about his/her crappy experience.
And yet I keep going back when I should know better. Stupid.
Posted by Mag at 7:10 PM 14 comments: