A Return to Tugboat

A couple weeks ago Brian, another Portland beer drinker, tweeted that he “finally made it to Tugboat Brewery. I flippin’ love it”. I replied that my first visit, in 2008, was uninspiring and was the reason I hadn’t bothered to make a return visit. His tweet and subsequent post piqued my curiosity though, and I made a mental note to make it a point to go back soon. As it turned out, my schedule got the better of me and it wasn’t until this past weekend I had the opportunity to make it over there.
As I walked through Tugboat’s door the dim interior invited me in. Busier than it had been on that first visit, it still gave off the vibe of a place to relax and hang out for a while. But this visit wasn’t for that. This was about the beer and the most expedient way to handle the task at hand was to be accomplished by grabbing one of the empty stools at the bar.
The chalkboard above the taps announced five house offerings: Thunderbolt Pale, Golden Rule, Hay Fork Blonde Ale, Coffee Porter and Chernobyl Stout. Disappointed not to see the IPA (my relative favorite previously), but having had many good pale ales lately, Thunderbolt seemed the obvious choice. The bartender, before pouring a full pint gave me a sample. It turned out to be a very fortunate thing because the $4.50/pint beer was weak on the hops and strong on the cardboard. I politely declined a pint of it and went to Plan B, the Coffee Porter.
I like coffee. I like coffee beers. I really like well-made coffee beers. I wish I could say this was one of them. There was very little malt presence to balance out the bitterness that didn’t just linger, but loitered, on my tongue and had I not been a die-hard coffee lover I can’t imagine I would have made it to the bottom of the pint.
With the Pale being an absolute miss, the Coffee Porter not one I was interested in having a second pint of and my remaining options being a golden, a blonde and a stout that they only served in half-pints, I decided it was time for me to go. While disappointed that they hadn’t upped their game, I figured that I had at least given them a fair, second go around. Thankfully, I have a long list of other places I can go to quench my hop thirst.
Posted by Kris at 1:45 PM 2 comments:

Email ThisBlogThis!Share to TwitterShare to FacebookShare to Pinterest
Labels: Tugboat

Since Everyone Else is Doing it

This week has been brought to you by the word “rapture” and the phrase “end of the world”. And although I’m not one to jump on most bandwagons, today I am in need of something to occupy my mind and time on this gorgeous, warm, sunny day in Portland until I can actually break free of  the chains of my desk. So, yes, Mom, I’ll jump off the cliff just because everyone else is doing it and give you my picks of beers to drink before the world blinks out.
Papago Brewing Hazelnut
Years ago, when I was a newbie beer geek I was visiting Mag in Scottsdale, AZ and we went to Papago. Nestled in a strip mall it wasn’t much to look as we parked and walked up to the door but once inside, it was a whole different story. Coming from MN where such a thing is verboten, this was the first bar and bottle shop I’d ever been in. I’m sure I drank a handful of beers there but to this day it is their hazelnut beer that stands out in my mind. I’ve tried others, searching for that elusive flavor. Unfortunately, most I’ve tried I couldn’t even call good, with Rogue’s version coming in the best, but still a distant second. I might not feel the same way today as my palate has changed considerably so I want this beer to taste to me the same as it did that evening way back when. (I mean if we’re talking about rapture and all, is this any less far-fetched? I think not.)
Summit Brewing Oatmeal Stout with Brett
As far as I know, this was a one-off beer, or at least one of their first attempts at it, served at The Happy Gnome’s Firkin Fest. This was back when people still asked what a firkin was and was also near the start of, or maybe the impetus behind, my infatuation with Brett. It had a funk that earned it a place in my mind forever as “the cheese beer”.
The Duchesse
Yes, there are many other sour beers that are better, that in fact I prefer if sour is what I’m in the mood for. Once again, though, the reason for the selection of this beer is not based on the beer alone. The additional reason is the inside joke that “it’s all downhill once The Duchess comes out”. Many a nights we probably should have been settling up the tab but instead, one of us, usually followed by a couple more, ordered her up. So if I’m going out, I’d like to go out in the happy fog The Duchess has become synonymous with.
Posted by Kris at 12:39 PM 2 comments: 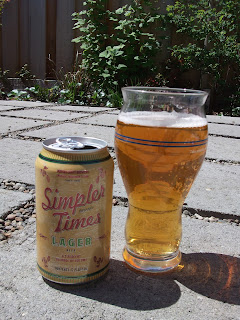 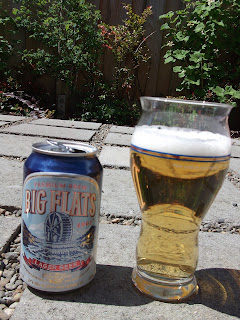 So there you have it. My curiosity has been satiated. Now we return to our regularly scheduled drinking of beer that really tastes good, instead of just not tasting bad.
*$3.29 6-pack Big Flats 12-oz cans + $4.29 6-pack Simpler Times Lager 12-oz cans doesn’t quite equal $10 but I figured the remaining $2.42 would go toward any pain and suffering this experiment might inflict upon me. Besides "The $7.58 Experiment" doesn’t quite have the same ring to it.
Posted by Kris at 9:30 PM 2 comments: