What we will do for beer


Last night that meant getting sticky and itchy at Hopworks Urban Brewery with eight or so fellow beer lovers with a couple hours on their hands. 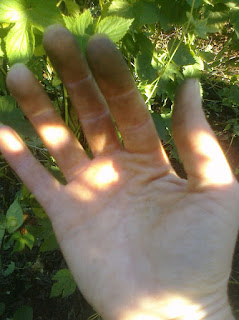 Behind the brewery lies a two year old patch of Cascade and hops which were ready for their first harvest. 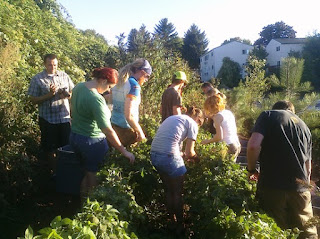 After a pleasant afternoon of picking, chatting, and enjoying beer the result is estimated to be enough to brew two batches in the brewery’s 30-gallon system. 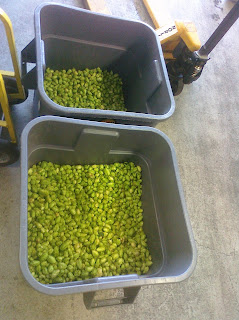 And now the wait, hopefully a short wait, until we're able to taste the fruits of our labors.
Posted by Kris at 6:55 AM 2 comments:

Email ThisBlogThis!Share to TwitterShare to FacebookShare to Pinterest
Labels: Hopworks

In a place where craft beer abounds around every corner it’s easy to overlook the solid, quiet players.  It’s especially easy for a beer geek like me who is always looking for the next new thing, the beer that will push the limits of hoppiness or ABV or uses some as of yet untasted ingredient.  Add to that a place that isn’t tweeting or posting on Facebook about what’s just been brewed or gone on tap and what you get is unintended, but not inexcusable, lack of attention and attendance.
Tuesday night, upon the suggestion of a friend, I made my way back to Alameda Brewhouse, one of the first brewpubs I had the first hand pleasure of enjoying.  As I drove east on , I was surprised to find the neighborhood looked just like it had years ago and even remembered stopping in at the slightly sketchy looking convenience store.  Good memories of that trip came to mind and I was hopeful the beer would be as good as the memory.
Perusing the tap line up, there were numerous beers that caught my eye, including an imperial IPA and a barleywine.  Knowing better than to start off with one of those heavy hitters I defaulted to their less potent El Torero Organic IPA.  The aroma was less stanky than I was hoping for with solid floral notes and the flavor was well balanced, an IPA most lovers of this style would enjoy. The pint went down easily enough but as I thought about what the next one would be I knew there were others I needed to try.
A friend had boldly started off with the imperial IPA, allowed me to try it and thus I was able to scratch that itch without a full pint of that powerhouse to down.  No doubt, this was a very tasty beer, but one more suited to a different day.  Going back to the beer listing, my second pint was a no-brainer order.  Cascadian IPAs are abounding in this area of the beer world and I was eager to see how ’s would stack up.  Presenting with a full dark hue, minimal head, and characteristic Cascadian flavor combination of hops and roasty malts, this was indeed an excellent beer!  As noted by a friend, who has an aversion to molasses, this beer offered stronger coffee notes from the dark malt than another recently enjoyed Cascadian, Pyramid Discord Dark IPA.
Just as I was wondering if I would make the next pint a repeat of one of the first two or possibly go down the lovely but treacherous path of the barleywine, our waitress arrived with one friend’s beer and an extra El Torero.  She apologized, offered it to me and deciding I was happy enough with the first pint to have a second, I accepted.  For as much as I had enjoyed the Cascadian IPA, going back to El Torero was no disappointment at all (and a bit of a bonus that she didn’t charge me for it).
I’d like to think this lesson will stick with me and I’ll not be as neglectful of quiet, yet quality players like .  If nothing else, the enticement of a good happy hour is worth the trip with $3 pints and $4 eats.
Posted by Kris at 6:42 AM No comments:

Email ThisBlogThis!Share to TwitterShare to FacebookShare to Pinterest
Labels: Alameda

Last night I met up with some folks for beers at one of the many places I have yet to visit, The Victory Bar. It was described to me as a dive, which is A-OK in my book, but upon arrival, “cozy, neighborhood bar” seemed a more appropriate description. Being the first one there (shocker, huh?) I bellied up to the bar for my first pint – Oakshire Mud Puddle Chocolate Porter – and to wait for the others.

While still working on the first half of the pint, Mike showed up, decided upon the Jolly Pumpkin Wit, and we grabbed a table to wait for the others. As it turned out JP’s version of a wit came with a fairly pronounced sour finish, much to Mike’s chagrin. Sours being right up my alley (and a bit bummed that I had missed the Cascade Frite Galois they had on tap the previous week), I gave it a try and offered to make his first beer my second beer so that he could order something more to his liking. When our waitress/bartender came by he ordered an IPA and I mentioned by way of explaining the nearly full glass in front of him, that he didn’t like it so I’d buy his IPA in exchange. She offered not to charge him for it but I insisted that I had tried it, enjoyed it, and it was no problem to keep it on the tab.

Fast forward a couple rounds beers and the rest of the folks that were supposed to show up…wherein we decided we’d all explored their beer menu to our satisfaction and decided to saunter down the street to one of the New Old Lompoc locations. Our tab came and low and behold – she actually didn’t include the Wit on the bill!

That’s a new level of commitment to customer satisfaction for me and just adds to the reasons (good beer reasonably priced, meat, cheese, atmosphere, close to home) I’ll be coming back and recommending it to others.
Posted by Kris at 12:40 PM No comments: