That Itch Has Been Scratched

You know when you get something in your head and it just won’t leave until you fulfill it? Like when you’re watching TV and there’s a commercial for some new, super yummy looking Blizzard? Or when there’s a beer you can’t wait to try? Or that new place that’s gotten rave reviews?

Well, Gastro Non Grata was an itch for me. I had been reading review after review each time a GNG event happened. Sometimes there were already other plans on the calendar, sometimes hauling my lazy butt out of the house at 6 pm on a Sunday was more than I could manage. This Sunday was different.

I’d been thinking about it all week, knowing we didn’t have any plans for Sunday and thinking maybe, just maybe I’d make it this time. A little extra push of guessing it would be the last GNG event of the year didn’t hurt either.

So out into the darkening late afternoon I went, planning a quick stop at the Blue Nile, hoping Al would be working. Not only was he working, but Dave and Sharon were already there when I arrived AND Al still had Mummy Train on tap. Oh yeah, and it was happy hour (aka 2-4-1s). Things were off to a good start.

Parking near Triple Rock was challenging, but I was pretty sure I’d parked in a 1 hour space. However, as I made my way into Triple Rock the signs seemed to indicate that was not the deal and a sure ticketing and towing was in my future. So I decided to split the difference – I’d hang out for an hour, then go back to see if my tires had been chalked and go from there.

Inside I ran into two beer friends, Steve and Jason, who helped fill me in on how these events went down and provided me someone to talk to as this was clearly NOT my crowd. Crowd is also an operative word here, which if you’ve been to festivals and such with me you know is not my cup of tea.

Since no beer was being poured gratis for some time I bought a pint of 21st Amendment Back in Black IPA and was pleased to find it a worthy purchase.

Things finally got rolling about 45 minutes after the doors opened with the first band playing and Northern Brewer sampling the lambic they’d brewed at the last GNG event. Great music and a very nice, not sweet and appropriately sour lambic.

About ½ hour later the first of the meat raffles was held, the first sample of 21st Amendment (Brew Free or Die IPA) was offered as was the first food sample, Chef Landon’s take on tator tots.

After braving the madhouse to get a sample of beer and food, neither of which I found remarkable, the second band started. They were even less remarkable than the other two components and it was at that point I decided to cut my losses and depart.

I was really looking forward experiencing GNG and really wanted to like it. But apparently it just wasn’t in the cards. Maybe I’m too old, maybe I like a better setting to enjoy good beer, maybe I like to be able to talk to the people I’m with and actually be able to hear what they’re saying. Whatever it was, it wasn’t for me but at least that particular itch got scratched.
Posted by Mag at 5:14 PM 4 comments:

Quote of the Day

"A great marketing event around shitty beer is only going to lead to people finding out you make shitty beer." - Sam Calagione, Dogfish Head
Posted by Mag at 11:36 AM No comments:

When Buster’s on 28th first opened we went there fairly often, or at least as often as our constantly-seeking-the-newest-beer mouths would allow. However I’m pretty confident saying it’s been at least 6 month, maybe more since we were last there. There’s multiple reasons why not and none of them particularly great, we just haven’t been for a while.

Last night Mag and I met up with Andrew and Ryan for a little beer talking and Buster’s was the place. We got there early to eat dinner and had I not forgotten my phone (which gets spotty reception in this bomb shelter disguised as a beer bar) I probably wouldn’t have seen one of the most exciting things written on a chalk board in ages. The cheese plate has returned to Buster’s!!!! Cheese, lovely, cheese…right then and there the mental battle between the Elian Gonzalez and a bison burger was over.

The three cheeses they were serving up were Benton Harbor Brie, Prairie Delight cheddar and Cypress Grove, a blue goat cheese, with a nice hunk of bread from their neighbor, A Baker’s Wife. All were excellent and the plate was HUGE, so I didn’t really need the cup of “World Famous Chili”, but dang if that wasn’t mighty tasty, too!

But the beer, that’s what you really want to know about, right? Mag had gotten there a little before me and started in on a bomber of Rogue St. Rogue Dry Hopped Red Ale. A good red, but a little disappointing that the wonderful b.o. aroma was more prominent than the actual hop flavor. I started out with a New Holland Cabin Fever, which was sweet, but not in a syrupy way, more raisiny and very nice. Next I couldn’t pass up trying the last in the Schells Anniversary Series, #8 – V.T., which I’m disappointed to say didn’t do much for me. On the latter half of beers, things took a turn for the better, including a bomber of Rogue Captain Sig’s Northwestern Ale (yes, Deadliest Catch fans, THAT Sig). Besides a cool bottle with Sig’s mug on it, it’s a tasty brew that I’m going to have to seek out on my next beer run.

Andrew took advantage of the ability to do a beer flight of any five of their tap beers and was kind enough to share. The picks included a New Belgium that was just too much on the bile side of sour for me and the highly regarded Goose Island Night Stalker that lived up to the hype. The rest fell in between and I’d love to tell you what they were however although their food menu has improved and they’re getting better about keeping their on line beer menu up to date, it’s still not usually current so I can’t rely on that, nor my memory.

So if you like cheese and good beer, get over to Buster’s. But if you go, go early as this joint is tiny and now that the weather has turned the patio is closed so seating is at a premium many nights.
Posted by Mag at 7:45 AM No comments: 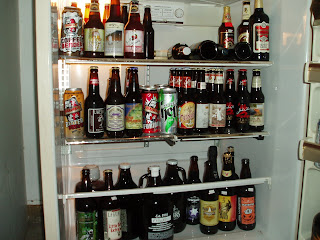 It looks like I’ve got a lot of work ahead of me. Too bad there’s that silly little thing called work…
Posted by Mag at 4:25 PM 2 comments: