The Hops are Mine

While it's not always appropriate to have a beer in hand, I now always will have hops on leg, courtesy of Miles over at Steady Tattoo. 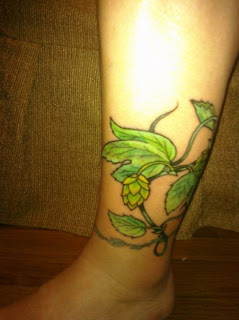 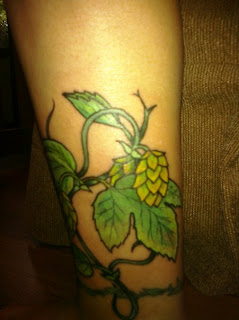 Today I was in Barley John’s neck of the woods and since that’s not something I can say very often I felt obliged to stop in, say hi and grab a growler. (It would have been a perfect day to grab a pint and enjoy their patio, too, however I resisted the temptation to do what I wanted to do and instead do what I knew I should do.)

As I walked in the door, the windows between the brewery and the vestibule were all full of condensation and since the awful heat and humidity of the weekend was behind us that could only mean one thing: brewing! Sure enough, even before my hand reached the inner door the wonderful, wet, grainy smell of brewing wafted to my nose. Heaven, pure heaven.

I probably wasn’t inside more than five minutes to get my growler filled (with Stockyard IPA) and pay. Reluctantly, I headed out with my jug 'o goodness but before I completely departed I took in the hop vines that are going to town as well as the garden. It’s a beautiful site to see so much green and growing on this strange, triangular patch of asphalt Barley John’s calls home. 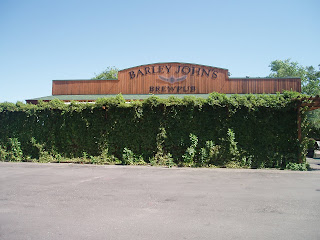 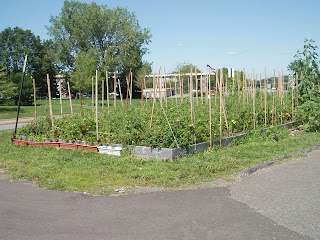 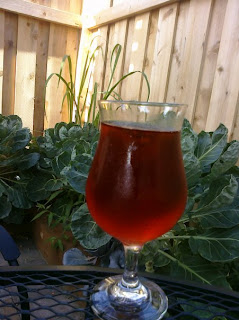 While it never takes much prodding to get me to head to the liquor store, yesterday there was a one, two punch encouraging me. First, Lift Bridge (specifically Brad and his lovely wife) was doing a tasting at The Cellars located less than a mile from my house. Second, an email from Jason over there letting me know that among other things, Crème Brulee was back in stock.

After working up the motivation to head out into the hot, steamy out of doors I made my way over there. I had a nice chat with Brad, which included hearing about the previous night’s Brew at the Zoo (it was sold out AND I’m told was a pretty good event). Then I made my way back to see all of the new things that had arrived since my last visit. Mark pointed out a few not to be passed over things and warned me away from a couple he knew would not be to my liking.

I’m not sure how long I was there, but like usual, it was probably a really long time to spend staring so intently at bottles of beer. In the end, I made out with 5 bombers, 1 single and a 6 pack of Lift Bridge Farm Girl. 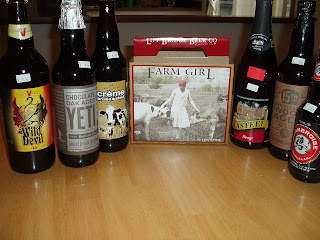 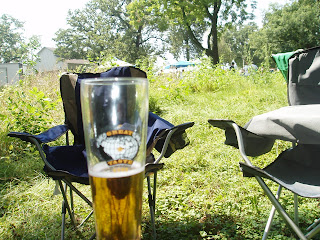 I’m happy to report that I can tell you what my first two beers of the fest were (Piece IPA, followed by Surly Bourbon One). What I can’t tell you however is what some of my last beers were. But, such is the way of beer fests. 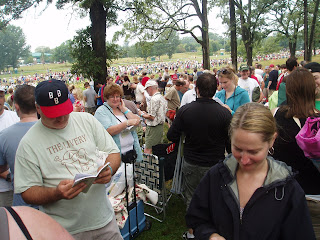 I’m also happy to say that although there were a lot of beers I realized I had missed upon opening up my cheat sheet the following morning, I tried a lot of new things and enjoyed nearly all of them. One category that there seemed to be quite a lot offered in, and I partook in, was that of the meads and ciders. White Winter is a pretty standard player at beer fests and I know Aeppeltreow Winery has been at the Great Taste in years past. B. Nektar Meadery, however, is newer and Dragonmead Brewery for the first year brought a mead along with their beer, which turned out to be a grape mead (pyment). It was amazing, but at 13% + this one could really knock you out. The pear was my favorite from Aeppeltreow and the vanilla-cinnamon from B. Nektar was surprisingly well balanced (plus, they had some super cool black girly tanks!). White Winter always makes a quality product but compared to the others they were a bit stingy on the samples.

To balance out my sweet tooth I also had plenty of IPAs including Lake Louie’s Kiss the Lips and Emmett’s Jaw Jack. Both gave me the hop fix I was looking for.

I’ve been coming around to the sour beers so couldn’t resist trying Lakefront’s Rosie (on completely the other end of the world from locally loved Barley John’s Rosie) and Jolly Pumpkin’s Roja Du Kriek. Their tables were nearly next to one another so I was able to do a head to head tasting and although Rosie is a lambic-kriek hybrid, it still put Roja to shame. There was a clear difference in quality although Roja was certainly a prettier girl. Looks aren’t everything! 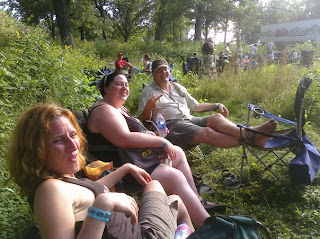 With only a few exceptions, I steered clear of the Minnesota breweries. It's not because they don’t produce a quality product but because I’m lucky enough to get them on a regular basis. Instead I tried to focus on things that at best I can find at quality beer bars or during a run across the river to Hudson, at worst, things I likely won’t be tasting again until the next Great Taste.

Sitting in the rain for 1 ½ hours and sweating my ta-tas off aside, it was again another great Great Taste that I’m thrilled I was able to go to. Thank you, Beer Gods, and please remember me again next year.
Posted by Mag at 5:07 PM 2 comments:

In less than 24 hours we’ll be making our way to Madison and in just slightly over 48 hours that which is the Great Taste will be underway. And I’m just giddy in anticipation!

Since the start of the week I’ve been rabidly checking the MHTG website for the program to be posted. Almost as a tease, they posted a combo map/listing of brewers Monday. That didn’t do much to scratch the itch so back I went again and again until mid-day Wednesday when the program appeared.

Being the geek I am, I had to sacrifice a few tree limbs and print the darn thing out. I’ve already given it an initial once over and later today I’ll be going back with a more detailed eye, already mapping out who I should hit first, who I want to make sure not to miss and who has said they will be doing special releases. Of course, as brewers are wont to do, some offerings will change and there will likely be plenty more special releases brightly written on chalk/white boards at the event.

Although the weather forecast (93 degrees!, are you kidding me?) has put a bit of a damper on my excitement it has also fueled the planner in me to try to figure out ways to mitigate the heat. The last couple years the weather has been pretty good, but there was one a few years back that was sweltering and we ended up leaving early, staggering back to our hotel. With any luck, some bit of self control and proper planning, will reduce the chances of that happening again. But really, the weather is secondary; THE GREAT TASTE IS ALMOST HERE!!!
Posted by Mag at 6:37 AM 1 comment: 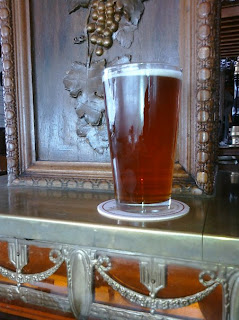 Once the last of the IPA had made its way from the glass to my mouth, I went for one of my favorite coffee beers, Furthermore’s Oscura. A really fine beer in its own right, it also turned out to be a very complimentary follower to the IPA. The end of the pint of Oscura also brought an end to my menu deliberations at Sturb’s for the day as there were other afternoon obligations calling.
Posted by Mag at 12:19 PM 1 comment: