A Wassailing We Go 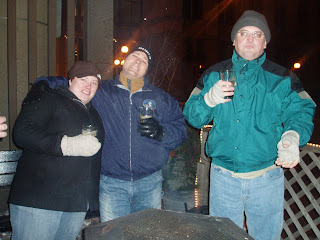 Thursday night we decided to head down to Great Waters with Kat and Scott for Wassail Night. If you're not familiar with wassail, it's "a delicious blend of Brown ale, hard cider, baked apples, and spices served hot." Great Waters was serving this out on their beautiful ice bar. Created for the Winter Carnival by Liam, this year they've got more than just a big, cool throne. There's also an actual ice bar, where the wassail was being served as well as various seating and high top style tables. 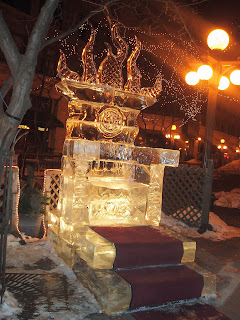 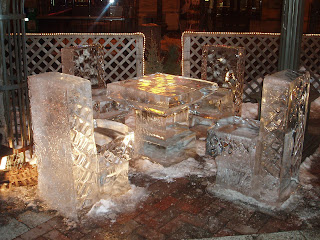 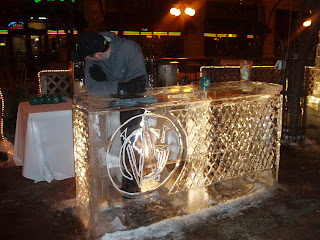 Back to the wassail itself. I was surprised that it was not as sweet as I thought it would be but don't take that to mean it isn't sweet. Served in a coffee mug, one was more than enough and Liam correctly describe it as a dessert drink. After one I was happy to switch back to beer, including a cask of Winterye, a version of their RyePA, that debuted at Winterfest.

Although next week it'll be March, winter hasn't completely let go and Great Waters will be doing a second Wassail Night on the 4th. So go get some wassail, add your butt imprint to the ice throne and enjoy the fire. Just be sure to follow the rules. 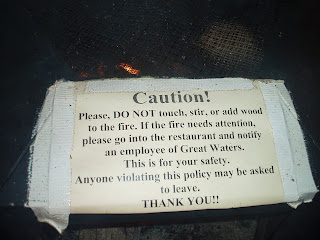 Finding a place to drink good beer around these parts isn’t hard. In fact it seems like sometimes there are so many that it’s hard to make it to all of them, to spread the love around. And just when it seems there are more choices than one deserves to have, another pops up.

Last night after dinner at Ginger Hop, we met up with some friends at Celt’s Pub in Inver Grove Heights. We’ve been there before and have been pleasantly surprised to find a couple of good beers keeping company on their ten or few taps with all those macros you’d expect to find at any dive-ish bar. I make the comparison to a dive-ish bar because from the outside that’s what it looks like and walking in the door, the impression is pretty much the same.

So back to the beer. To our delight, the good taps on this visit were represented by Bell’s Hopslam and Surly Furious. Plus, they’ve got a better than average bottle list for this type of joint, including bombers of Rogue Dead Guy. Celt’s also gets points for very friendly staff, tasty Heggies Pizza (yes, it’s frozen but it’s still pretty darn good AND it’s a Minnesota based company), a popcorn machine and Big Buck Hunter.

Email ThisBlogThis!Share to TwitterShare to FacebookShare to Pinterest
Labels: bar

Contrary to our expectations, Kris and I had a pretty darn good time at Winterfest this year and I couldn't be happier about it. Some of our biggest areas of concern were addressed, which helped make the event more enjoyable. Most notably, the breweries/brew-pubs were spaced out a bit more which helped keep congestion under control. That had been our biggest concern with the event last year. I didn't feel cramped or uncomfortable at all this year. Many/most of the folks I spoke with concurred.
Once again, the beers at Winterfest were an absolute treat. I didn't go in with any plan in mind and, in fact, didn't bother picking up a program. I prefer to wander around, drinking what I come across and chasing down referrals from others. Oftentimes this means I miss especially interesting beer, but so be it. I wasn't disappointed with this years results.
Beers of Note
I had my first taste of Elisha's Olde Ale and Rainwater from Brau Bros. and was very surprised at how drinkable they were (for me) given that they were both 10% ABV. Very dangerous, indeed.
I also really enjoyed Surly's Jesus Juice (wine-barrel aged braggot - Three). I'd had it last year when it was released and didn't care much for it, but this seasoned rendition was damn good.
As usually, Bob & Joel at Great Waters brought some fantastic and interesting brews. I especially enjoyed their Winterye Mix.
Finally, I was very delighted with Rock Bottom's pulled Rotator IPA. It had the sour, funky BO aroma that I enjoy and some of the funk carried through in the flavor. Damn fine beer.
Disappointments
There was really only one source of disappointment about the event for me. I didn't quite have enough time to have any beer from Schell's or Barley John's, nor did I get a chance to have as many beers as I would have liked. There was just too much ground to cover in three hours and I spent too much time wagging my tongue.
Best of All
The best thing about this year's Winterfest is that there was no throw-down at Great Waters after the event. Thanks Keith!
Posted by Mag at 4:59 AM 2 comments:

Tired of seeing and hearing all those commercials that promise they have what “she” wants for Valentine’s Day? You know the ones that try to convince you that a piece of jewelry or a bouquet of flowers will make her swoon. Load ‘o crap.

Here’s my contribution to the marketing hype surrounding this “holiday” and a suggestion for anyone whose sweetie is sweet on the hop juice.

Create your own video slideshow at animoto.com.