As luck (or the work of the Beer Gods) would have it, a work trip to Alabama fell on the days preceding Firkin Fest and I had the opportunity to layover in Minnesota before returning to Portland. This is the fourth year of the festival and I’ve been there since the beginning. For those of you that haven’t, a quick recap of how it started to give you some perspective on where it is now.
Year 1: I’m pretty confident in saying the festival, held the Sunday of St. Patrick’s Day weekend, was an afterthought and simply a way to generate some additional revenue inside the tent (that likely wouldn’t have been taken down by the rental company until Monday) The Happy Gnome had erected in their parking lot. It was small (about 20 firkins), but not bad for the first time around.
Year 2: While larger (about 60 firkins), the festival still seemed to be a St. Patrick’s Day hanger on. That was ok; it was still fun.
Year 3: This was the first year it seemed like the festival was starting to stand on its own. Unfortunately, standing on its own also seemed to mean there wasn’t enough cash to rent a sufficient number of port-a-potties and since there was no cap admission, there were far too many people there.
Now that you’re caught up with the first three years, onto Year 4. This year the festival was clearly its own event. Held a week and a half after St. Patrick’s Day, for the first time on a Saturday instead of Sunday and finally, finally one entrance fee for as much as you wanted to drink (no more dealing with those pesky tickets for each sample) it seemed like things were coming together. The organizers were expecting over 80 firkins this year and as a response to the crowding issue from the previous year, they said they were capping the number of tickets they would sell.
That all sounds pretty good, doesn’t it? They’re addressing all the issues of the past and bringing in more firkins. I wish I could say, “Yes, in the fourth year, Firkin Fest was a roaring success!” Unfortunately I can’t and here’s why:
That doesn’t mean I didn’t have a good time. In fact I had a GREAT time! However, my great time had much more to do with the friends I went with and the many, many friends that I have missed since moving to who were also there than what the festival offered. (And here’s the shout out to Joe, Tom & Tom!)
For those of you in who decided to read about a festival in MN that you’ll probably never attend, thank you. I’m excited to attend the firkin fest at the Green Dragon in April to see how it stacks up. See you there!
Posted by Kris at 6:11 AM 3 comments:

A Weekend of Beer Gathering

Most of the time when I buy beer to restock the fridge, there isn't much of an advance plan. Maybe there was one beer I had in mind that drove the me but it's often a spur of the moment decision that I want something besides what is already in the well-stocked fridge. And usually my plan for moderation flies out the window when all the tasty choices are in front of me. This weekend was different; I had a solid, four part plan in advance.
Part I – Growler Fills at The Guild
As I mentioned last time around, the offer of $8 growler fills at The Guild Public House was a can't-pass-this-up type of deal. I knew I had to get there before the end of the month, when the promotion would end, and the coupling of an impending out of state work trip with the announcement that starting Monday (today) they were scaling back their hours, opening at 4 pm daily, put this on the must do list for the weekend. Although I didn’t know exactly what beers I would pick up due to the rotating nature of taps, I knew I’d be getting two growlers filled. (Any more would probably overload my limited fridge situation.)
Part II – Cascade Barrel House
Being in the flight path between The Guild and home, I knew a stop into Cascade would be an easy one. The hard part, I figured, would be getting a bottle of the already-a-week-past-the-release 2008 Apricot Ale. Lady Luck, who pinch hits for The Beer Gods from time to time, was with me. A quick call confirmed I hadn't missed my chance. I made two bottles mine, along with a pint of their freshly released, and very refreshing, Spring Gose.
Part III – Station 14th Anniversary
This weekend was the 14th anniversary for Belmont Station and as a gift to their customers, they were offering 14% off all purchases on Sunday. 14% isn’t a lot, but when you buy good beer, beer that generally doesn’t go on sale at all, it’s worth making a point to take advantage of it. Knowing that I easily get distracted when I walk in there with all the choices and I could easily spend hundreds of dollars there on a day without a sale, I went armed with a list. There were four beers on it and it was four beers I walked out with.
Part IV – Four Play
Upright Brewing, was also celebrating an anniversary (their 2nd) this weekend. A major component of the festivities was the sale of their much talked about Four Play. As you might guess with a name like that, they had fun with the artwork for the label. This year's artwork wasn't as racy as last years, yet there was still back and forth about it. I personally think it's much ado about nothing, especially in a town where there's at least one strip club in every neighborhood. As for the beer itself, it is Belgian in character, starting out with a wheat base, and then aging for a year in former pinot noir barrels with cherries, souring yeasts and bacteria. There were no limits on how much one could purchase but I practiced some rarely used restraint, bringing home just two bottles.
Weekend Total:
1 growler Everybody's Brewing Country Boy IPA
1 growler Prodigal Sun Rye
2 bottles Cascade 2008 Apricot Ale
12. 7 oz bottle Russian River Sanctification
6-pack Widmer W'11 KGB
22 oz Firestone Walker Double Jack
22 oz Laurelwood Espresso Stout
2 bottles Upright Four Play

In lieu of any photos from me, check out the links in Part IV. That should satisfy your eye candy cravings.
Posted by Kris at 12:56 PM 1 comment:

It's as Much the Beer as the Drinking of It 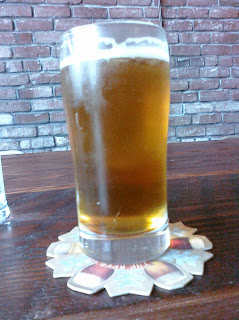 Pliny is a Big Deal. Just like Three Floyds Dark Lord, Surly Darkness and a host of other beers that have transcended the confines of their bottles and kegs. Their names now conjure up visions of the faithful turning parking lots and bars around the country into beer geek extravaganzas. Whether or not you agree with the beer's exalted status, it's hard to argue that there are some beers that the beer-iverse has decided are a Big Deal.


But back to Pliny. Years ago of course, there was just Pliny the Elder (which I'm pretty sure I've had but it's been a long time and a multitude of fantastic beers have passed through my parted lips since then so forgive me for not being 100% sure). Then Pliny the Younger came onto the scene, vying for attention.
From the get go, there has been plenty of debate about how the Younger stands up to the Elder. Since I've yet to have them side by side, I'll step aside and let others continue that debate. What I can say though is that after having the Younger for the first time Sunday afternoon at Saraveza, this is a great beer in its own right.


Part of my lack of Pliny tasting has been that it is such a Big Deal and as much as I love geeking it up with a bunch of other beer lovers, most of the Pliny events have been at relatively small venues not designed for the popularity of such an event. Yes, I want the beer. No, I do not want to be crushed by a bunch of rabid folks to get the beer.


Sunday afternoon offered exactly the kind of low key environment that I enjoy. Saraveza was lucky enough to get an additional 1/6 barrel keg from the distributor and decided to announce, on only hours notice, to only their email list, when it would be available. No Twitter announcement. No Facebook announcement. And from the look of things during the first hour or two, those in the know abided, without prompting, to conform to the manner in which Saraveza chose to disseminate the information.


It was a very pleasant tasting where there was room to move, no jockeying for a seat and no roar of the crowd over which you'd be hard pressed to hear what your fellow beer geek was saying. The bonus was two beers from Hollister, which I've never heard of and never tasted, but thoroughly enjoyed. I'll get some Elder later.
Posted by Kris at 8:59 PM No comments:

You’ve heard about some great places around where good pints of beer can be had for $3 or less. Well, I’ve got another doozie to tell you about.
Earlier this week a member of my Twitter-verse alerted me to $8 growler fills at The Guild Public House for the month of March. The Guild? Sure, there are more places I haven’t been to and haven’t heard of than I have, but being situated along a strip of Burnside I like to think I’m relatively familiar with I was surprised not to have gotten a whiff of this place earlier. Besides, $8 growler fills? Even if they only had one or two good beers on tap it was bait enough to hook me.
After looking at their food menu online, I wasn’t sure they’d be a good destination for a meal so we decided to put a trip to The Guild on hold and head to Burnside Brewing for lunch. As we pulled into Burnside’s parking lot, we realized why we’d been remiss in making a second visit here: they don’t open until after lunch on the weekends. Bummed, but not deterred, we headed east on Burnside, intending to hit up Migration.
We made it just a couple blocks down the road before spying The Guild so we decided to switch gears and try it out. Walking in, cursing myself for not having a couple growlers in the car, we found it to be quiet but with a promising eight-tap line up and a friendly bartender. 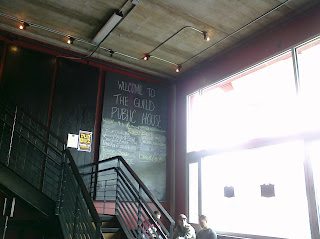 With the first pints ordered, Double Mountain Spicy Brown for me and Oakshire O’Dark :30 for Mag, it was time to look at the food menu. Previously the only thing that had caught my eye was the pulled pork Cuban but they also offered a muffuletta. Tweeting out our visit, I found out our food choices were good ones, but also that they apparently offer some rockin’ jambalaya on Tuesdays. 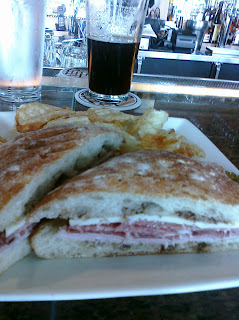 After a great lunch (I’d happily order either sandwich again, although the happy hour snacks available 4-6 sound great, too) and another round of beer we headed out. But not before agreeing this was another spot to add to our list of places to come back to. And you can bet I'll be returning, growlers in hand, before the end of the month to take advantage of the bait I was glad I'd bitten on.
Posted by Kris at 1:03 PM 1 comment: