Remember when you were a kid, probably around junior high age, when out to eat at certain restaurants you were given an empty cup an allowed to get your own soda? And at some point the idea took hold to have not just one kind of pop, but ALL OF THEM?

Fast forward some twenty odd years to this past May at the Stillwater Brewers Bazaar. Sometime during the latter half of the festival Jason’s friend Toby decided to go for a grown up version of the soda suicide using all of the Surly beers they were pouring that day. Had this happened at the beginning we would probably have just blown him off, but being that we now had a few beers under our belts, it didn’t seem like a completely crazy idea. And you know what? It was actually pretty damn good!

Skip ahead a couple more months and we decided to have our own in-house beer suicide making evening. Kat & Scott came over, bringing with them some good base beers to compliment the many more aggressive beers we had on hand. Some of our concoctions were great, some “meh” and others were not good (but none so bad that they were poured out). 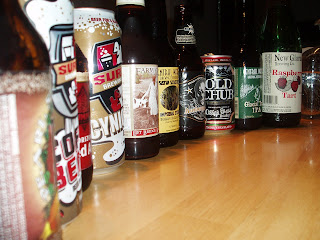 Beer suicides aren't for everyone, but if you're creative, open minded and use small glasses you just might surprise yourself with some unlikely but tasty creations.
Posted by Mag at 8:15 AM