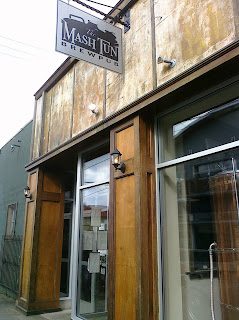 Of the two, The Mash Tun won me over for beer offerings. All five house taps sounded good, but I was particularly enamored with the Master Bitter and Nightfall Dark Ale. The bonus came in the form of a basket of perfectly cooked tots with a side of buffalo sauce. (All of the aforementioned items just $3 during daily happy hour to boot.) As much as I enjoyed it, I fear making it back here on a regular basis isn’t going to happen. The Alberta Arts District is a hopping place and I can imagine that if anything is going on, navigating through the foot and car traffic would be a nightmare, not to mention how difficult parking would be.
The tots may have been good, but Grain & Gristle upped the ante on the food front. The cured meat board, which included braunschweiger, was tasty, but it was the airy, nearly foot high pile of pork rinds that blew me away. Lucky for me, my companions were satisfied with just a piece or two each, leaving the bulk of the salty pork goodness for me. Unfortunately, I wasn’t nearly as excited about the tap list. The Firestone Walker Velvet Merlin was the only beer that held any interest for me. With that said, I can’t knock them on their beer selection after only one visit. I suspect they go through kegs quickly so another day may find me in a quandary as I stare at a board filled with beers I want to drink.
All in all, it was a successful outing. Hopefully you had an equally enjoyable Saturday night.
Posted by Kris at 11:05 AM

Email ThisBlogThis!Share to TwitterShare to FacebookShare to Pinterest
Labels: Grain and Gristle, The Mash Tun