OMSI's After Dark series of events which involve food and booze AND are children-free are a great concept. After hearing about them yet never making it to one last night's was too much of a temptation to pass up as they touted beer and burgers. 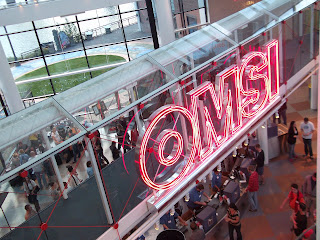 Burgers & Brew. Enough Said.
We get serious about warm buns, frosty mugs, and hot, dripping patties. Discern the difference between grain- vs. grass-fed beef, delve into the science of skunky beer, and experience the magical action of yeast. Drink up with beer samples from local breweries while learning how the beer is made.
Seventeen breweries are participating in the second annual brewfest. Brewfest tasting packages include event admission, souvenir pint glass, and 10 tokens for samples.
Science nerds unite for childfree, brain-building science fun at OMSI After Dark!

Not knowing how many tickets would be available and being type A in general I purchased tickets in advance and anticipated the event.


Unfortunately what was a great concept was exceuted very poorly. This was particularly surprising to me as OMSI is a well-respected museum. I'll give a beer festival, especially a new one, a bit of a pass when things aren't well executed but I can't understand why OMSI would make so many amateur mistakes.
1) First of all, they weren't ready at 6:00 when the event was supposed to start. Some of the areas were still closed off and most of the food vendors were still in prep mode.
2) There was zero signage so for someone like me who has never been to OMSI all I had to rely on was a confusing museum map.
3) The breweries were not provided with rinse water and I only saw one water station set up. Bad for beer tasting, bad for beer drinking (hydration). 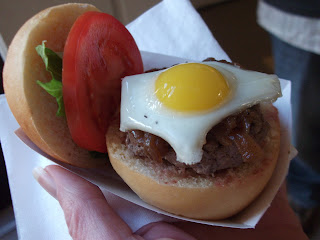 4) There were only four "burger" vendors. Stock & Barrel was the only one I observed that was ready and actually offering sliders, very tasty quail egg topped sliders. The vendor making water buffalo burgers wasn't nearly ready at 6:00 and although there was a line, I never saw a table of samples. Apparently there was someone on the patio grilling but the line was so long I never braved it. SortaSausage, while offering a surprisingly tasty HempBurger, only provided 1" square samples in condiment cups. Rheinlander, who was at least 30 minutes tardy offered beer cheese soup/dip with rye bread. Delicious for sure but not a burger and before the event was over they had run out of cups. 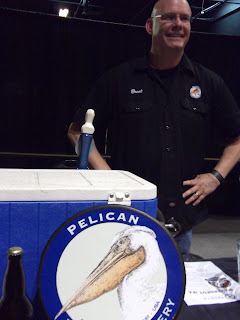 While the food portion of the event was a complete fail the beer portion was somewhat better even though I'd had 90% of the beers available previously. My favorite of the evening was one new to me, Silverspot IPA from Pelican. Besides a portion of the proceeds benefiting butterfly conservation efforts, it was a very sessionable, bright, citrusy hop beer. A close runner up for favorite was Fort George Working Girl Porter. Summer has been fun but I'm ready for some cooler weather brews and their porter was just the way to start down that path.

I can now say that I've done OMSI After Dark. I can also say that as far as I am concerned it is an overpriced, overcrowded and poorly executed event. But now I know and knowing's half the battle. 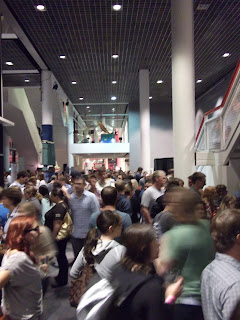