It was a whole new take on fresh hop beers Concordia Ale House offered last week. Instead of choosing your selection of fresh hop beers off a list, for $12 a tray of 10 unmarked beers was presented. In this way there was no opportunity to be influenced by the name of the brewery or whatever you may have heard about a specific beer. It was just your taste buds and the beer. 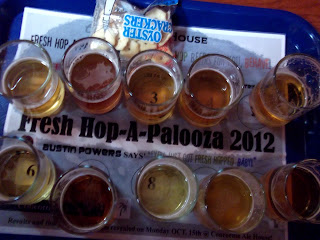 Of the 10 beers provided the clear favorite in my book was #5 with #8 coming in second. Mag preferred #7 with #1 being his runner up. Although I couldn't be for certain I was pretty sure that none of the 10 tasted familiar. Going on the last day of the Palooza meant that I only had to wait about 12 hours to find the results waiting in my inbox, a timeframe when the beers were still quite fresh in my mind.

My favorite also turned out to be the crowd favorite, Ninkasi Total Crystalation, a fresh hop version of Total Domination. New Belgium Hop Trip X took 2nd, Rogue Oregasmic took 3rd and Mag's favorite, Sierra Nevada Southern Hemisphere came in 4th. Reviewing the full list I think my initial impression that I hadn't had any of them previously was correct. With any luck, even though fresh hop season is winding down, I do hope to get a few more pints of Ninkasi's deliciousness!

If you attended Fresh Hop-a-Palooza how did your favorite stack up? Was is something you'd had before?