Barrel Aged Ciders: A Collaboration Between Reverend Nat's and Raven&Rose

Warning: This post is not about beer. It's about cider that's almost as good as beer. 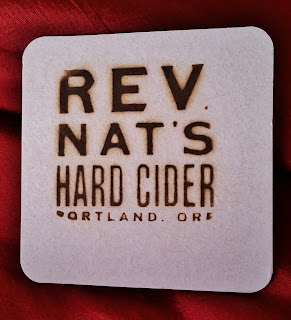 Reverend Nat's, always on the cutting edge of the cider world, has teamed up with Raven&Rose to produce two barrel aged ciders. Raven&Rose provided the Eagle Rare Bourbon barrels where Revival and Sacrilege ciders sat for about four months. This Thursday those ciders will be available at the Rookery Bar above Raven&Rose.

Before we get to the ciders and happenings  on Thursday, I wanted to share some of what I learned during the "lecture" owner Nat West gave to the Oregon Bartender's Guild. "Lecture" isn't really fair since it was one of the most interesting presentations I've been to (not to mention there was cider being poured throughout). He covered the history of cider in the US and abroad, the process of making cider and the varieties of cider. 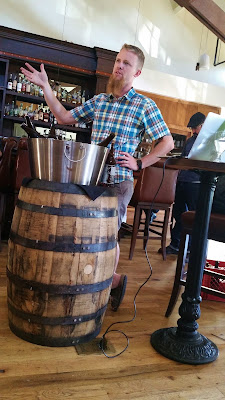 Some of the most interesting takeaways:

Now, back to the upcoming release of these two barrel aged ciders. I had a chance to try each and I can assure you that the barrel did its work on the Revival, imparting a ton of bourbon aroma and flavor. Not being a bourbon connoisseur the subtleties may have been lost on me but those more well-versed in the spirit should enjoy the side-by-side boilermaker experience of the cider and the bourbon from that barrel. The effect of the barrel on the Sacrilege is completely different and the result is a very dry and tart product. Intended to be a primary component in the Old Fashioned, generally a very sweet drink, the goal was to enhance the sour, dry and funkiness of the cider. Both the boilermaker and the "Old Fashioned" will be available for $10.

For those not able to make it to Raven&Rose Thursday there are a limited number of bottles of each barrel aged cider. But I can't tell you more than that...just yet. Keep up with Reverend Nat's online or check back here. I promise to let you know more as soon as I can.