Good Day for Beer - Bad Day for my Nipples 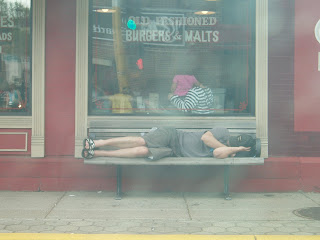 Yesterday's Brewers Bazaar was...well, interesting. It wasn't your typical beer tasting kind of event in that we didn't see very many familiar faces and the crowd was mostly a non-craft beer kind of crowd with pockets of beer folks. It was fun, nonetheless. And the breweries and brewpubs were well represented. Kris and I had previously had opportunities to meet and chat with Jeff Williamson of Flat Earth and Bob DuVernois of Great Waters, but yesterday we got to meet and spend some time chatting with Dave Berg of August Schell, a couple of the guys from the new Lift Bridge brewery in Stillwater, and Trevor Brau of Brau Brothers. Hell, even Mark Stutrud, founder of Summit, was there serving beer and chatting up the attendees. The guys from Fitger's (Brian and Bob, I think) were familiar faces and I think they work at the brewery, but I didn't ask in what capacity. I will, yet again, re-declare that most of the folks that I meet at these beer events, including the brewers and their reps are damn nice folks.

Now, let's talk about my nipples. I know you want to. When we were in Portland several weeks ago, I'd picked up a cool Rogue shirt (kind of a Hawaiian shirt). I washed it before wearing it, but didn't wear a shirt underneath it. The material was a bit rough and I'll be damned if it didn't start wearing my nipples raw. God that hurts. So, early on I was forced with a bit of a Sophie's Choice. I could soldier on with my beer drinking, leaving my nipples to the ravages of Satan's threads or I could swallow my pride and find some bandaids or tape to protect my nipples. Turns out I don't really have any pride to salvage, so I begged for some tape from the fest workers. At the end of the day, I decided I'd rather go through the excruciating pain of ripping packing tape off my sensitive and hairy nipples versus the excruciating pain of tearing my dried-blood soaked shirt away from the ragged stumps of what were once my nipples.
Posted by Mag at 9:37 AM