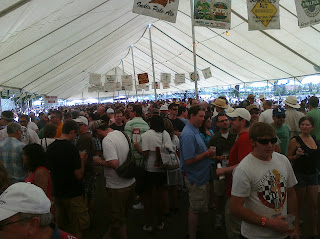 Yesterday I was a bit negative in the thoughts shared about the Oregon Brewers Festival.  Some of that negativity is my own damn fault.  What should I expect when I move out to Portland and away from drinking the beer I love with the people I love?  Of course OBF isn't going to stack up.  And then to do a direct comparison, and a negative one at that, is disingenuous at best.  I think my comparisons were pretty spot on, but I focused on the negativity.  My apologies.  Time to make amends.  Here are some additional thoughts.

Great Music
I really enjoyed the live music we heard yesterday and Friday.  On Friday, there was a interesting "trance/psychedelic" (I guess) band called Ruins of Ooah that consisted of nothing really more than a harmonica, drums, a didgeridoo and vocals.  Their music was creative, enjoyable and pretty original.  On Saturday we got to enjoy a bit of techno from a DJ as well as some fellow playing steel drums.  And you know what, it all fit the fest.  And it wasn't so damn loud that you couldn't chat with the folks around you.  I still think bagpipes would be a nice addition, though.

Beers - Not a Bad One in the Bunch IMO
I thought it was interesting that I didn't drink one beer, either day, that I didn't enjoy to some degree.  There were one or two that I maybe wouldn't purchase given other options, but I'd be happy to drink them again.  There weren't any beers I hated or decided to dump, and I pretty much tried as many different ones as I could (okay, except for the gruit).  There was a wide range of beers from sours to RIS to blueberry wheat to gruit...oh yeah, and IPAs.  Kris and I were excited to have our first nano-brewed beer as well (yeah, I know, no big deal, but it's the concept, you know).  Additionally, getting a 4 oz sample (a very strict pour) gives you a chance to really sample a beer.  One of the nice things about this event is that if you especially like a beer, they're willing to give you a full pour (about 14 oz typically, versus the 4 oz sample).  And, as I've learned, the purpose is to promote as many brewers as possible, not labels, thus the one-beer-per-brewery requirement.  I can respect that. 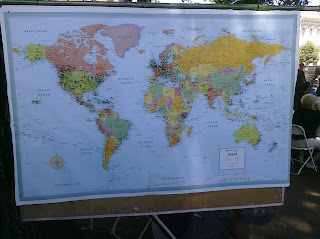 The Style
Saturday's was a markedly different crowd than Friday's and the beer shirts came out in force, thank god.  I also saw more Wolverine-style sideburns than anywhere else, at any time in my life.  Gotta love that.  We also, finally, saw the folks sportin' the wild and crazy stuff, like the guy with the watermelon hat, vest, pants, etc., the goofy beer hats and goggles, and so on.  Oh yeah, there was lots of cleavage too. 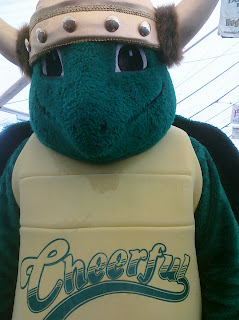