Deano has tried it and liked it; here's my take on the beer in the cool can.
Out of the can, the amber brew poured fairly carbonated so I let it sit a couple minutes. 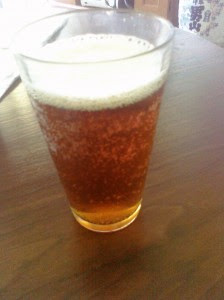 While I got the can shot posted the head had a chance to recede a bit and it was time for the sniff test. The result was a slight hop aroma...promising. Well, first swig says…have more! They didn’t hire a graphic artist first and a brewer as an after thought. This is actually a tasty beer. The gamble paid off.

I won’t say this is the best ever IPA, and I might even lean a little more toward pale ale than IPA (but that might be because there’s rarely a “too hoppy” beer for me). But it’s a solid beer that you could have a few of without burning out your palate.

So in the end, cool can, good beer, and well, it's in a can, which is a big plus if you're going to be somewhere with a "no glass" policy or you don't feel like doing the heavy lifting of carrying around bottled beer.
Posted by Mag at 6:23 AM