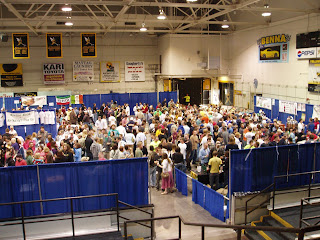 Yet another successful and relatively safe trip to the Gitchee Gumee Brew Fest this year! We went up this year on Friday with Kat and Scott and had a chance to visit a few places we'd not yet been, including Sir Ben's and Thirsty Pagan. Hell, we even watched a few ships come into port. It was almost like a real vacation!

Gitchee Gumee was fun again this year, but its changing. It was still mostly a college crowd and that crowd was reasonably well behaved, but I think the over all quality of breweries and brew pubs went down...kinda sorta. I mean, home town hero Fitger's wasn't there and there were some other notable breweries missing, which was disappointing, but we did get a chance to see some new places (and I'm not talking about Landshark). Upland Brewing (Indiana) was the most memorable one in my mind, especially since the folks there were so damn nice. From a MN Beer perspective, Schell's, Surly, Flat Earth, Rock Bottom, Summit, Lake Superior and St. Croix were there (did I miss anyone?). And we got a chance to catch up with friends and make a few new ones.

Most memorable moment: Seeing some 6'6" dude hold back puke with his hand until he could make it to a garbage can. I mean, come on! Lightweight!

Favorite beer: Scott and I agreed that Muskie Capital's American Pale Ale was our favorite and Kat and Kris agreed that New Glarus' Raspberry Tart took the prize. I also got a chance to enjoy Schell's Stout. I thoroughly enjoyed it (but since 7 out of 10 doctors recommend pales over stouts, my vote goes that way).