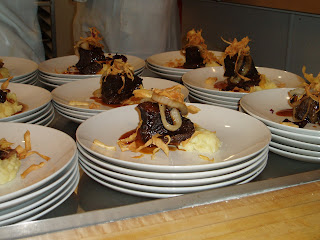 For some reason (prolly not a good one), Kris and I had never been to any of the many beer dinners around town until last night. I don't know why we waited so long to attend one. It was fantastic.

Last night The Dining Studio (Create) hosted Jeff Williamson and his Flat Earth beers in a food-beer pairing dinner. Initially it was just going to be Kris and I going from among our group of friends, but Kat and Scott scored tickets at the last minute and Gene and Jeff were able to use some of Jeff Williamson's comp tickets.

As a rule, I don't like eating while drinking beer because the food very often changes the taste of beer for me, and not in a good way. And yet, in last night's pairing, I didn't experience this. Last night was truly the first time I enjoyed the beer more because of the food.

The folks at Create matched up a local greens salad with Raspbeery Belgian Pale, a seared/baked duck breast and chow-chow with '07 Winter Warlock, braised beef short ribs and mashed taters (okay, puree) with Element 115 and a fig pound cake with Trees. And it all worked! This was the first time I'd really had duck. It was seared then blackened and thus was really moist and a bit rare. I was surprised at how fatty the breasts were and I wasn't sure I would enjoy the duck, but man it was succulent and flavorful. I was surprised at how all the flavors stood on their own without getting lost when I took a bit of the duck with the mustard sauce and tart chow-chow all at once.

But as far as I'm concerned, the braised beef short ribs were the highlight of the evening. The aroma and rich flavor of the beef and demi glace gravy immediately made me think of mom in a big way. At the first bite, I was taken back in time to memories of eating ma's pot roast. I literally sat in my chair, bouncing and humming and smiling while I was enjoying the beef and thyme potato puree.

Now, I've had "fine" dining experiences in the past but, frankly, I've always been bored and a bit disappointed. I'm the kind of guy who could be perfectly content to eat pizza and burgers the rest of my life. Well not any more. Apparently Mr. Low-Brow is going to have to elevate things a bit and put on his fancy pants a bit more frequently. 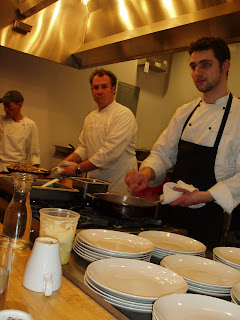